At the beginning of this year I began prototyping an audio reactive headband to wear in my everyday life, like while dancing with my dog in my lab listening to Legend of Zelda dubstep. 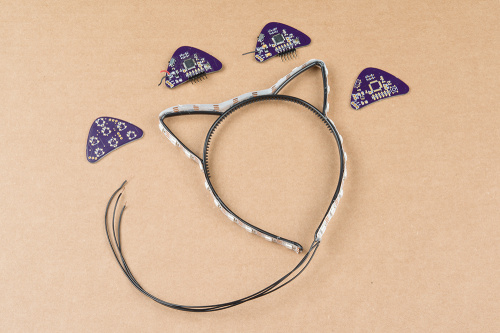 The headband leaves much to be desired.

I immediately noticed several problems with the initial design:

The good thing about the design is that it worked, the sketch is simple, and the symmetry for visualizing the peaks of the seven bands within the audio spectrum was exactly how I envisioned.

I decided to put the project on hold until inspiration hit me with the solution. A few weeks ago I saw this post by my favorite Engineer/Maker/FashionTech Designer/Roboticist Anouk Wipprecht – a kitty ears soldering project with 3D-printed headband. I immediately ordered the Electronic Kitty Ears Headband from Shapeways, and after more digging around I found the Instructables tutorial for the kitty ears soldering project. The tutorial includes the BOM, the .stl files for the headband and a link to the OSHPARK shared project.

I downloaded the gerbers and exported the dimension layer as a gerber by itself. Then I imported it to the dimension layer in EagleCAD so I knew I had the same dimensions and my circuit would fit in the Kitty Ears headband. You can see the prototypes in the first picture. In a day I captured the schematic from the original prototype circuit and laid out the PCB design in the Kitty Ears form factor. There are a few problems with the second round of prototypes but once I iron the kinks I will also make this a shared project on OSHPARK - it was quite a fun and challenging SMD soldering day. If you'd like to see the project in its current form you can view the EagleCAD files, a zip of gerbers for each ear, and the code for both the original prototype and second on my GitHub repo.

The next step is adding wireless communication using the RFM69 to the tank top I'm wearing. I'm also hoping to incorporate some connected e-jewelry as well. I'll just go nuts. Connected wearables up next!

From Trash to Flash

Getting more from your SparkFun Edge Development Board