What an internship at SparkFun is like, the projects I've been up to, and the lessons learned so far.

Hello from SparkFun's most junior noob: the intern. That's right, SparkFun has an internship program, and I've been given free rein with an Enginursday post. For those of you (including my parents) who are curious as to what exactly a Product Development Internship at SparkFun is and who I am, read on. If you just want to hear about the projects I'm working on, skip the next several paragraphs.

Hello, my name is Humsini, and I’m a senior at CU Boulder, where I study mechanical engineering and neuroscience. I've had the great fortune to work on a number of hands-on projects, ranging from tabletop Guitar Hero to a fingertip sensor for a neural-integrated prosthetic (which, coincidentally, was from the same lab that SparkX collaborated with for their fingertip sensor). I also do a lot of work with Engineers Without Borders, a non-profit group of student and professional engineers that develop sustainable engineering projects to meet basic human needs and empower communities.

Now I'm interning at SparkFun, which, for someone who previously turned into a real-life "The Scream" when dealing with circuits and electronics, has been quite the learning curve.

The internship, much like SparkFun itself, is hard to explain. It mainly involves a lot of coffee runs (just kidding), human target practice for Michelle’s NERF gun skills (wish I was kidding), and shadowing the various departments that work tirelessly for you – everything from product dev, to supply chain, to engineering, to shipping and receiving.

We also get to work on various projects that need help, from vetting products, to programming the Inventor’s Kit robots to draw shapes, to LilyPad wearable projects. The best part? An assignment to build our own personal project that can be whatever the heck we want. It’s sufficient to say that I have already learned A LOT so far, especially for someone coming from a non-electrical or CS background. But more details on that later...

That being said, here’s a look into some of the projects I've been up to:

Tasked with showing the wide range of possibilities available to teachers with the SIK, Jackson (the other Product Dev intern) and I set about creating a modified version of the autonomous robot from the SIK Experiment Guide. With some simple code and buttons to activate different modes, the robot could draw a circle, square and spirograph. While not terribly hard to code, we found the quality of the shapes varied drastically depending on where, and how well, the Sharpie was mounted to the robot. If you’re ever looking for a simple project that kids would enjoy, challenge them to make a DrawBot!

I acquired this beauty for $5 from the SparkFun garage sale, with the disclaimer that the volume knob was broken. Filled with all the unfettered optimism of someone who has no idea what they’re doing, I thought I could fix said knob using my highly-adept mechanical engineering skills (i.e. just jamming it in until it stuck there). After that didn’t work, I just decided to take it apart instead.

Side rant: The funniest part of working on hands-on projects, for me, is that no matter how much theory you know, something can still sideline you in the simplest of ways. Have I taken an entire class on the mind-numbing intricacies of screws – mechanics, American and International standards and precision classes, various types, how to calculate the shear and bending stress surrounding them, manufacturing process, etc.? Yes. And yet, there was one dastardly screw that just barely escaped my trusty SparkFun screwdriver and made getting into this thing a 45-minute affair. 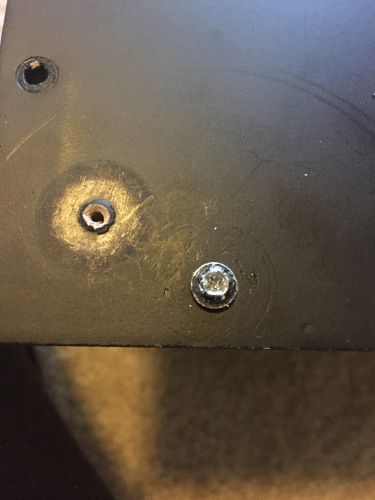 Just call me Magic Mike, because boy, did I strip that.

I managed to tear that puppy apart, and I was excited to see how all of it worked, but after taking one look at that circuit board my entire brain just made cricket noises. Toto, we’re not in voltage-resistor circuits anymore. 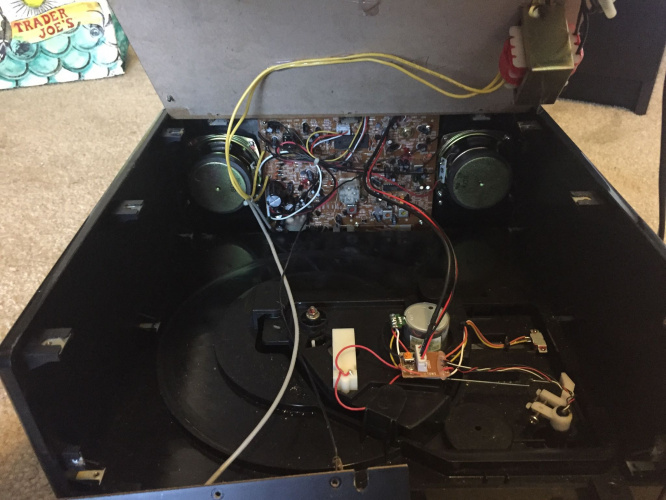 Never thought I'd say it, but I miss truss systems.

But that’s okay! After some quick Googling of components and how turntables work, I was able to figure it out. 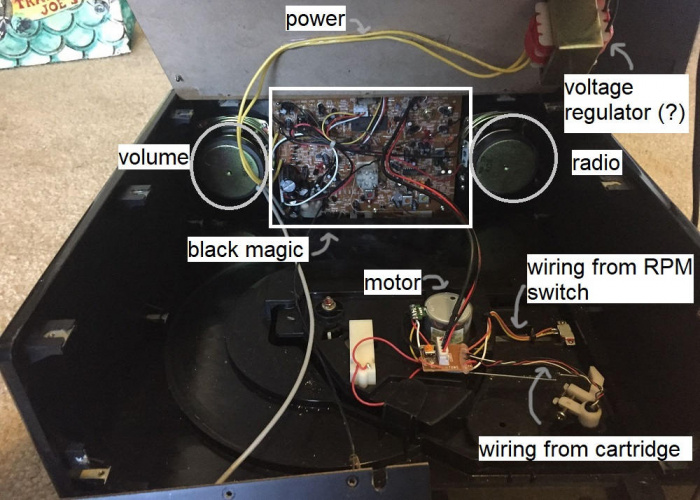 Please excuse the highly professional use of MS Paint.

The circuit has two IC chips: a PT233 (an audio transformer), and an LA1824 (an FM/AM chip for circuits with manual tuning). While I am far from completely taking apart the turntable, it's a fair start and I'm excited to take apart the inner components further.

Ideas for a Final Project

It took a a good month to figure out what I wanted to do for my personal project. What I’ve noticed about idea generation for projects is that you quickly fall down a rabbit hole and end up with more ideas than you could possible have the time for.

Because I’m huge nerd for neuroscience, I decided on 3D printing a brain with clear PLA, then implanting LEDs in the different lobes to light up with different buttons. If I'm feeling extra frisky, I might even use some 3mm EL wire to demonstrate some basic sensory circuits. This, however, is still mostly in the idea phase: neural circuits are hard enough to viusalize in in two dimensions, let alone three. I did find a great project on Thingiverse that has the same sort of look I'm shooting for.

The wearables project is what I'm most excited about. I love biomechanics and motor control, and one of the most fascinating concepts is bipedal walking – everything from the overall inverse pendulum dynamics, to the muscle coordination, to the motor control (conscious and sub-conscious) required to maintain balance and movement amid various dynamic environments so you don't fall on your face fascinates me. So behold, the walking leggings! I’m trying to think of a cooler name.

Using muscle sensors and fiber optic fabric, I want to light up muscle groups, overlaid on a pair of leggings, that activate as your muscles do. Increased muscle activity corresponds to increased brightness – essentially, leggings that demonstrate this.

This project excites me not only because my inner research nerd is super excited, but also because I get to experiment and prototype with sewable electronics, something I've never done before! Speaking of which, if anyone has ever had experience sewing fiber optic fabric, I am desperately seeking advice. The fiber optic fabric requires a 5mm LED, which while kind of bulky for a wearable, I think will create a fun opportunity to play with enclosures and possibly 3D printing on fabric (I'm imaging a kind of 3D-printed thigh holster for the LEDs).

This week I’ll also be prototyping reusable electrodes that sew into a garment using this cool tutorial from Advancer Technologies. 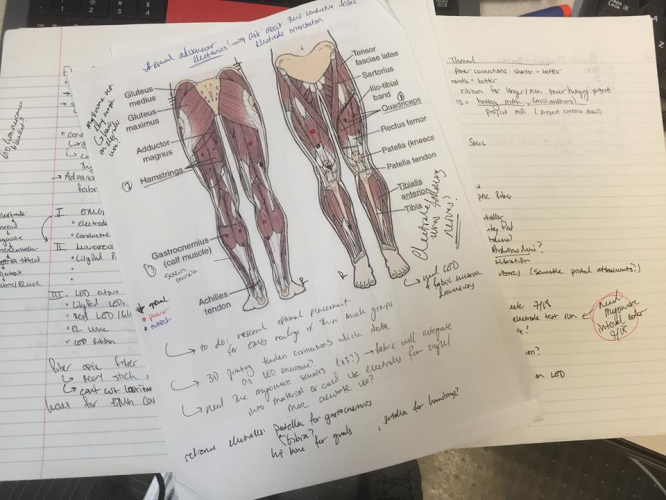 My notes so far on how I want to make the leggings.

After I test how feasible the DIY conductive fabric electrodes are, I will actually plan out the full circuit I want to use (possibly an I2C protocol?), but that's next week's problem.

Even though I’m at various stages of completion in these projects, I’ve learned a lot:

Not even to mention that SparkFun products can be used in any of those fields, providing ease-of-use and quality hardware to your various electronics projects. (Wink, wink, do I get my commission now?)