I was recently approached by music producer Decadon to add lights to an already custom guitar to make it even more one-of-a-kind. Let's check out some of the challenges I faced.

It's not every day you get handed a guitar that has only two others of its kind in the world, and it's an even rarer occasion when the owner trusts you to cover it in LEDs. In order to maintain this trust, I wanted to figure out some way to add the lighting effects that I wanted without affecting the structural integrity of the guitar whatsoever. I didn't want to drill into or glue onto the guitar due to the lack of an available second chance, so I came up with a plan to sandwich the guitar in between two layers and support my various lighting mechanisms through that.

If my guitar is a sandwich, then the bread is the guitar-shaped plexiglass cutouts on either side. To start mocking the shape up, I traced the guitar on a dry erase board with a marker, and measured the rough dimensions of the guitar. I then snapped a picture of this outline and dragged it into Illustrator. Tracing the outline of the guitar didn't yield perfect results; I probably sliced about 30 "guitars," moving a line here, nudging a hole there, before I got that wacky shape figured out. 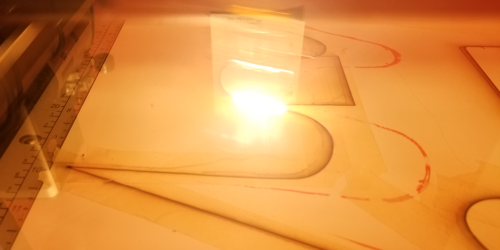 Once I had that sorted, I had to figure out a way to get that bread stuck together. To do this, I added tabs along the outside (in strategic points, which I'll talk about later). Once I had these tabs attached I was able to sandwich the guitar in between my "slices of bread" and get things attached to the guitar.

It's not just a screen, right?

I wanted some aspect of this guitar to be new and novel, so I figured I'd add some fiber optic around the edge of the instrument to give it that unique extra touch. Remember how earlier I mentioned that the tabs had been strategically placed? I placed the tabs at inflection points on the guitar, as I'd have to mount the fiber optic to these tabs, and mounting at those inflection points (where a line changes its curvature) will keep the fiber as close as possible to the body of the guitar.

I also wanted an unbroken line of light around the edge of the guitar. To create this effect, I used a double stranded twist of fiber optic along with a clever mounting solution. The issue with lighting fiber optic via LED is that you have to relight the fiber every foot or two depending on the amount of bend and desired brightness. This usually means that every time you relight the fiber optic, you have a dark spot in your line where the lighting module sits. To combat this, I have a double stranded twist of fiber optic; each lighting module sits on a tab in between the "slices of bread" and pumps light into just one strand of the twist, while the other strand passes unbroken over the top. This setup allows me to keep the whole edge lit with seemingly no interruptions.

Now you may notice that the fiber optic runs down the neck of the guitar and you might be thinking, "Hey Andy, I can't play guitar with that in the way!" and to that I say yeah, you know what, you're probably right. Due to that this little feature might not be on the final product, but I'm gonna test it with the artist and see if it's playable, and if not, hey it looks pretty sweet for now.

Mocking up a pixel layout

I didn't want to over- or under-order my pixels, and I also wanted to have an idea of how I would transmit data to the array, so I wanted to mock up the array before laying pixels down. To do this, I created a mock-up of an SK6812 skinny pixel strip, printed a whole bunch out, then carefully cut and laid them down on a cardboard cutout of the guitar shape. I then numbered the pixels and decided how I'd send all the data (I eventually settled on three strips of LEDs). 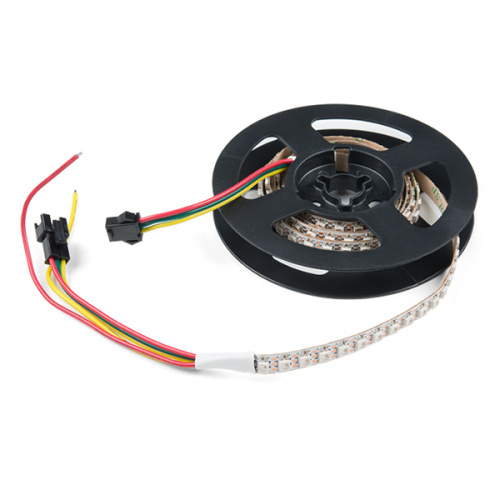 These are skinny addressable 1-meter-long 5V RGB LED strips that come packed with a whopping 144 SK6812s.

Once I had my rough mock-up completed I ordered around 1600 SK6812 LEDs and set about cutting and soldering the strips onto one of the plexiglass "slices of bread." Note that power does not need to necessarily follow a particular direction; you can connect the power/ground of any strip to the power/ground on any other part of the next strip. This is unlike data, which must zig-zag down the array so data reaches every pixel.

Ground first! Make sure to connect the ground of your LEDs before hooking up any other connections.

Help me, my pixels are flickering

That's not enough info, you're gonna need to tell me a little bit more. Flickering is usually caused by a loose connection – you can usually tell which connection is loose upon visual inspection of your flicker.

That's a lot of LEDs, mind elaborating on all that wattage in the cottage?

This project is a pretty large one, involving a TON of SK6812 LEDs. In fact, at full white, I could hypothetically be yanking nearly 500W. This being said, these LEDs are actually a little painful to look at when you make them vomit as many photons as possible, so for a screen application, it's good to bring them down to about 25 percent brightness (I did all my debugging at 12.5 percent to avoid blindness) to allow for a sane amount of light to enter the retinas of your audience. However, the LEDs in the fiber optic should run at full brightness as the fiber diffuses the bare LED quite well. 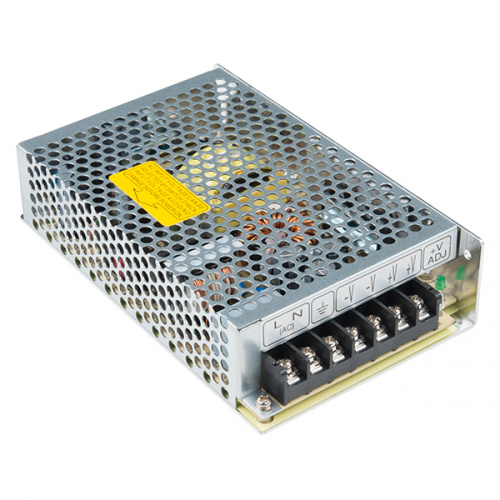 This is a 100W single output switching power supply from Mean Well. This power supply is extremely reliable and able to outpu…

Speaking of diffusion, nobody likes looking at bare LEDs right? Right. In order to add a little bit of diffusion and also clean up the look of the project, I snagged this neat, heat-activated fabric called Wonderflex and formed it over my custom screen once I made sure all of my solder joints were properly done. This step was quite a lot easier than I thought it would be, just 180°C from my heat gun and bend. The finished product looks a bit better than bare LEDs.

I got a little bit sick of staring at the rainbow, so I figured I'd try and generate some other good-looking gradients. Inspired by Felipe Pantone's artwork in which he stacks color waves on top of one another, I decided to take a similar approach. What I did first was create a sine wave for red, green and blue, then I randomized the amplitude and frequency of each wave and stacked them on top of each other. I reshuffled my frequencies and amplitudes once all combinations of the waves had been displayed. The result is quite stunning and generates a bunch of natural-looking gradients that I would never have come up with on my own. Pipe this code into your own LED strips and let me know what you think!

Any project always has room for improvement, and with this one there are a couple things I'd like to see. The first thing would be a tighter pixel density for the face of the guitar. The second would be to continuously shuffle the frequencies and amplitudes such that the waves are constantly shifting their shapes and sizes. The next effect I was going to add was varying speeds and directions on each of the waves to allow even more variability. Getting all of these things implemented would make a seriously good-looking effect for LED strips. If you have suggestions for wacky color patterns or functions you like to run on your LEDs let me know in the comments below.

Ask Questions For Today's AVC Interview with Nate and Pete!