Our newest (sorta-Python-related) tutorial shows you a few ways to run a script whenever a Raspberry Pi boots up.

If you've used a microcontroller (such as an Arduino), you probably realize that there is beauty in its simplicity. When you give it power, it (almost always) begins running your code right away without any hassle! The same simplicity does not hold for full-fledged computers, like a Raspberry Pi.

Because systems like the Pi run an operating system (Linux), many things must occur in the background before you're able to run your own code. While general purpose operating systems are extremely powerful and offer a lot of flexibility to users, it requires extra effort to tell the system that it should run your program right after booting.

To give you a few ways to run your program on boot, we have a new tutorial for you:

How to Run a Raspberry Pi Program on Startup

In this tutorial, we look at various methods for running a script or program automatically whenever your Raspberry Pi (or other Linux computer) boots up.
Favorited Favorite 19

In it, we show three methods for scheduling a Python program to run right after startup along with some troubleshooting tips in case it doesn't work on the first try. While the tutorial is more thorough, below is the abbreviated, TL;DR version.

rc.local is likely the easiest method for running your program on boot, but because it executes before any graphical desktop starts, you will not have access to graphical elements. To add your program (we'll use an example Python 3 program named blink.py), modify rc.local:

Just before the exit 0 line, add the following: 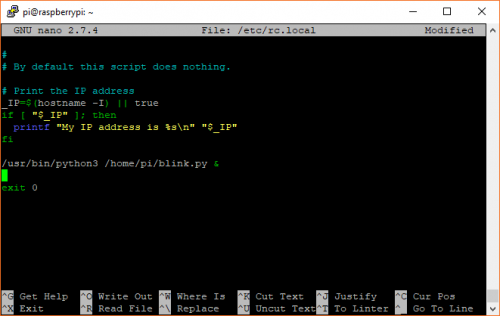 Save and exit with ctrl + x, followed by y when prompted to save, and then enter. Reboot your Pi with:

If you need access to graphical elements (for example, you are making a dashboard with Tkinter), you will need to wait until the X Window System has started before running your program. The easiest way to do that on the Pi is to use the autostart system (which is included with LXDE, the graphical desktop environment in Raspbian).

In a terminal, enter the following commands:

In the blink.desktop file, enter the following: 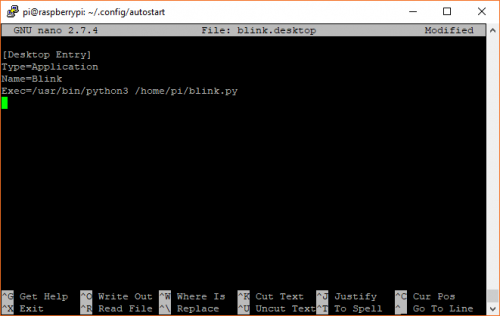 Save and exit with ctrl + x, followed by y when prompted to save, and then enter. Reboot your Pi with:

systemd is a more robust way of creating services to run your programs, but it is more complicated to use. While it is intended to start programs in the background, independent of any user-level desktop environments, you can still create unit files for systemd that wait until networking, graphics, etc. or just brute force restarts until the program runs (see the systemd section in the full tutorial for more information).

To create a basic unit file, run the following:

Enter the following into the blank .service document: 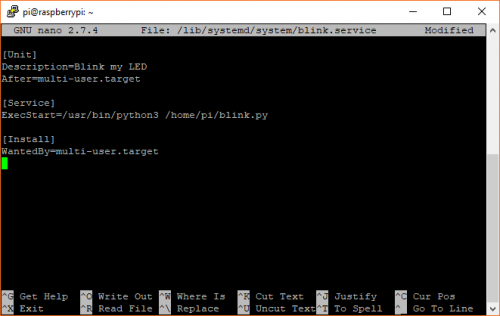 Save and exit with ctrl + x, followed by y when prompted to save, and then enter. We then need to tell systemd to recognize our new service and enable it with the following:

Finally, reboot your system with:

Because it's Linux, there are many ways to accomplish a thing, and starting a program on boot is no exception. Other methods exist, including SysVinit and crontab. What is your favorite method for running a program on startup with Linux?