Spending some time with Google Trends and trying to predict the future.

I found a free minute to fiddle with Google Trends yesterday (only slightly more scientific than googlefight). He's my take on the current state of electronics:

Sure enough, SparkFun has seen more search volume since the end of 2006 when google decided to start tracking us. I wonder what we did to flip a switch like that... 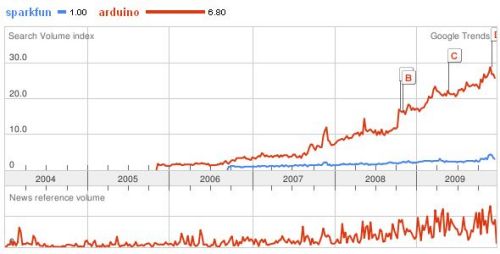 And sure enough, if we start comparing SparkFun to the other kids in the field, we will all look bad standing next to Arduino. Those punks, always stealing the show!

Now if we throw some other friends into the mix, things get interesting. It seems Make Magazine has had some pretty decent search traffic since before 2005. And it's been very flat and friendly for the most part. We can now remove SparkFun from the graph, but notice how Arduino is taking over the world... And what was the coincidental bump for all three of us at the end of 2007? 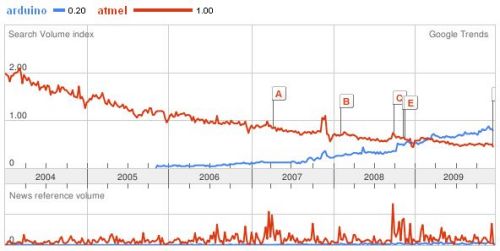 I have a lot of meetings with potential part vendors, and none of them understand Arduino. I don't think anyone does, but I did have a meeting the other week that surprised me. Microchip wanted to meet with us because they were interested in creating an 'Arduino' like board using a PIC processor. Microchip finally began to understand what it means to get people early, and using their hardware, and Microchip was sensing (rightfully) that they were loosing market to this thing called Arduino.

Arduino is causing the world to use and learn AVRs. As much as I resisted, I learned ATmegas because Arduino hardware forced me to learn. I now love ATmegas. And if Atmel was smart, they would give Arduino all the free ATmega328s they could possibly want. Check out that graph! 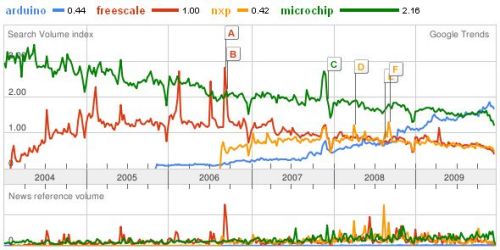 Speaking of weird graphs, it looks like everyone is declining. I interpret this as follows: the overall search traffic is increasing (on rather useful terms like 'Tiger Woods'), which is driving everyone maintaining the status quo, to a downward trend. I believe Microchip is doing just fine, but when compared to groups that are truly innovating and generating buzz, they (along with NXP and Freescale) are loosing ground.