Distance sensing combined with haptic feedback create a way to "see" the world around you.

When one of Thomas Sullivan's friends lost sight in one eye, Sullivan decided to design a device to help with peripheral vision. The feedback he received was so overwhelmingly positive, he decided to design a pair of glasses that combined distance sensing and haptic feedback to allow the wearer to form a mental image of the three-dimensional space in front of them.

Learn more about his design here 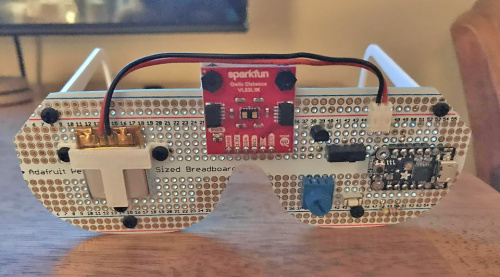 While Sullivan continues to share his design with friends and family, he ultimately hopes that someone will take the design even further to allow for more widespread testing and access.

Make sure to check out the rest of the SparkFun Success Stories as well!
Project Submissions: If you have a project that you want to show off and are interested in writing a post for SparkFun, tweet us @SparkFun, tag us on Instagram @SparkFun, or shoot us an email, but the best way is to submit your project by clicking the link below. We'd love to work with you and share your project!