There's Something About LoRa

Need more range from your sensor project? LoRa may be just the thing you need!

In the current age of social distancing and outdoor-only events, a big takeaway for me has been this - for a lot of things, the further away they can be, the better! Of course, that’s because I’ve been dipping my toes into the LoRa pool. LoRa is a wireless technology offering Long Range (see what they did there?), low power, secure data transmission. It’s based on chirp spread spectrum modulation, allowing for communication over long distances without using a lot of power. LoRa fills a big void that existed between the short range communication of wireless local area networks, such as Bluetooth and WiFi, and the much longer range of cellular networks. Originally developed by Cycleo and acquired by Samtech, LoRa and LoRaWAN are now overseen by the LoRa Alliance, a non-profit association that has become one of the largest alliances in the technology sector. The LoRa Alliance supports LoRaWAN (long range wide-area network) protocol as well as ensuring interoperability of all LoRaWAN products and technologies. 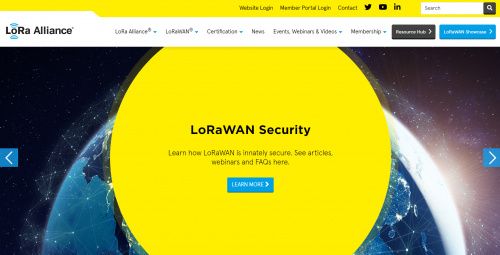 The nonprofit LoRa Alliance is made up of over 500 companies from across the tech spectrum. (Image credit: LoRa Alliance)

We see LoRa and LoRaWAN a lot, but are they the same thing? Are they interchangeable? The short answer is no. But for the longer, more technical answer, let’s dig in a bit.

LoRa is the network protocol that resides at layer one of the Open Systems Interconnection Model (or OSI model) of computer networking. This layer defines the means of transmitting raw bits over a physical data link between network nodes. LoRa utilizes sub-gigahertz RF bands, including 433MHz, 868MHz (for Europe), 915MHz (for Australia and North America), and 923MHz (for Asia). These radio frequency bands are license-free, falling into the ISM band - Industrial, Scientific and Medical - and are therefore accessible to all of us for things like IoT applications.

LoRaWAN, developed and maintained by the LoRa Alliance, is the low-power, cloud-based, medium access control sublayer protocol, acting mainly as a network layer protocol (at layer three of the OSI model) for managing communication between end devices and a central network server. It targets key Internet of Things (IoT) requirements such as bi-directional communication, end-to-end security, mobility and localization services.

How far is far?

The beauty of the LoRa protocol is its range. Practical range for LoRa devices is usually listed at somewhere in the neighborhood of 10 km, with achievable range put somewhere between 15 and 20 km. However, there are a number of factors that can increase or decrease that distance. Things that will play heavily into the performance you get with your LoRaWAN or LoRa peer-to-peer project include things like transmission power mode, network and node-gateway positioning, antenna performance, and probably the most important factor of all - the surrounding environment, or the presence of physical obstructions. LoRaWAN is designed primarily for use outdoors, or in extremely large structures. In an urban setting, you might be lucky to get any more than 2-3 km. In a rural setting, however, range increases dramatically. LoRa’s range is heavily dependent on line-of-sight, so the more wide open your spaces, the better. Here at SFE HQ, we have a great line-of-sight out to the foothills, and we’ve gotten results a bit over 19 km. Of course, we’re using a fairly impressive antenna. 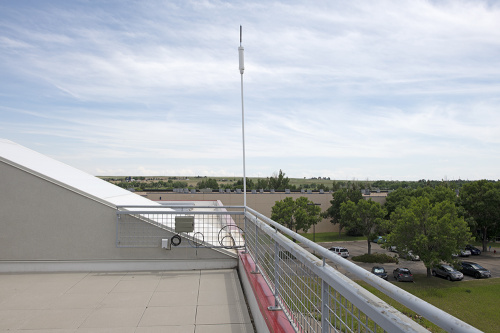 The right tool for the job. In this case, a very tall, very powerful tool is the right tool.

LoRaWAN global network coverage currently includes 167 countries and stretches across a wide spectrum of markets. In agriculture it’s being used for things like herd monitoring, irrigation control, and soil health monitoring. Utility companies are using LoRa for capacitor bank control, asset visibility, and transformer temperature monitoring, among countless other applications. And cities are finding myriad uses for LoRa networks, such as street lighting, waste management, and parking management. I got to see an early implementation of that last use case when I was in Las Vegas for Defcon several years ago. The Bellagio has, as you can imagine, an enormous parking structure. I’m sure that most of us know the frustration of driving around a parking garage, peering down every aisle hoping to spot an empty space. The Bellagio had installed a system wherein a proximity sensor was placed over each parking spot, along with a red and green LED. Any open spaces were easy to spot thanks to an illuminated green LED over each one, while occupied spaces had a red LED overhead. And perhaps the best part - at the end of each row was a large LED matrix indicating how many open spaces were available in that row. It was such a simple idea, but LoRaWAN made it possible.

As great as this type of application is, it is at its core an application of convenience. But LoRa has the potential to save lives. Consider this as an environmental project: According to research by geographer David Petley of the International Landslide Centre at Durham University, UK, between 2004 and 2010, over 32,000 people were killed in landslides, a figure that Mr. Petley believes is grossly underestimated, and it excludes landslides triggered by earthquakes. Residents of low-lying towns and villages could benefit greatly from an early warning system, and a LoRaWAN system could fit that bill beautifully. By placing sensors in areas around and above the landslide zone and sending information to a central hub, residents could be warned when conditions became unstable a dozen or more kilometers away, allowing them the time to escape lethal danger, saving lives.

The white dots represent fatal landslides from 2004-2010. LoRaWAN could be a simple and inexpensive way to greatly reduce this number. (Image Credit: David Petley)

I’m planning on putting together a LoRa project or two over the summer, and while they may not be as grand as a lifesaving landslide detection network, they should definitely be worth a look when I’m done. I would encourage you to take a look a LoRa as well, and think of its possibilities. So keep an eye out for my net LoRa project, and until then, Happy Hacking!

Geeky Faye and the SIK: Round Two