Finishing up the Halloween projects with SparkFun's own Nate Seidle.

For those of you who haven't yet put a face to the name, that picture above is Nathan Seidle, Founder and CEO of SparkFun. You might notice that his outfit in this picture is, shall we say, a bit unusual. What's going on here? Well, that is Nate's Halloween Costume - cleverly named "Mixed Signal." Nate takes a certain level of pride in his Halloween costumes each year (remember the Heartbeat Staight Jacket), and this year was no exception. Nate and his lovely girlfriend Felicia set out to become human stoplights. But they took it a step further - their outfits were synced up wirelessly. When Felicia's costume showed "Stop!," Nate's said, "Go!" There was a certain level of programming that went into this, plus the use of a whole bunch of LEDs, a MOSFET, and a pretty time-intensive build. 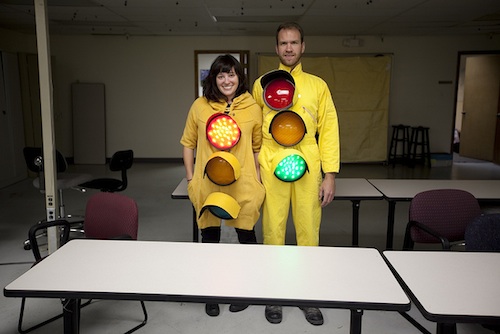 The results were pretty awesome. You can imagine the looks Nate and Felicia got walking around Boulder. Check out Nate's tutorial to see how they built the costumes, the programming and design that went into each light, and where, exactly, one finds a sweet yellow jumpsuit.