Another round of new products, and a special project for this week.

If you don't always read or watch the Friday New Product Posts, this is a good week to do so. Not only do we have some really cool products this week, but we also managed to complete one of my favorite projects to date. I definitely recommend watching the video below.

The Self-Contained Off-road Robotic Potato Inertial Opponent Neutralizer (or SCORPION for short) was a very satisfying build. Except for some power issues for the remote ignition circuit, everything worked well. The platform is easy to control (albeit a little top-heavy) and fired consistently once we got a proper battery on the igniter. 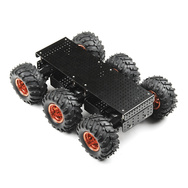 When I first saw the Wild Thumper Robot Platform, the only thing I could think of was some sort of military assault or recon vehicle. The entire chassis is metal and the holes allow for endless possibilities for mounting sensors, robot arms, or weaponry. With 6 individually articulating motors and plenty of clearance, it makes a fantastic robot for use in uneven terrain. Just make sure you use a good power supply and powerful controller. 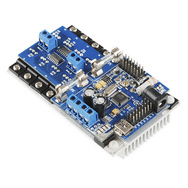 Speaking of powerful controllers, check out the Wild Thumper Controller Board. It's a powerful motor controller loaded with a lot of other great features. At the heart of the controller is an ATMega168 with an Arduino bootloader. That's right, all you need is the Arduino IDE to start loading code. In addition, many of the digital and analog pins are broken out so you don't need any additional microcontroller to add extra servos and sensors for your robot. It even comes with the ability to measure voltage, current draw, and battery charging (NiMH, NiCd, SLA). If that wasn't enough, the whole thing is mounted on a beefy heatsink to keep everything cool. If you're looking for an all-in-one controller board, this just might be exactly what you're looking for. 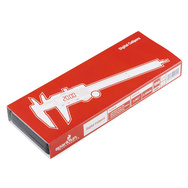 Digital calipers are a tool that I would have a hard time giving up. I'm constantly using them to measure hole sizes, spacing, and dimensions for the products we sell. In addition, I use them for a lot of the projects we do every week. We found a new supplier for our 6" digital calipers and are now able to offer them a lot cheaper and in a red box! If you don't already have a pair, now is a good time to get some. 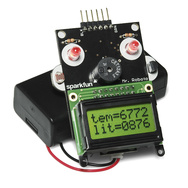 Mr. Roboto is a great educational kit that doesn't require much soldering, but can be endlessly programmed to do a lot of cool things. It includes a couple LEDs for eyes, a small character LCD, a buzzer, temperature sensor, and a light sensor. The PCB comes with an ATMega328 and some other SMD components pre-soldered on the back. All you need to do is solder on a few through-hole components and you're ready to go. You can use an FTDI to reprogram Mr. Roboto do do just about whatever you want. Check the programming examples on the product page and starting thinking of what you can make it do! 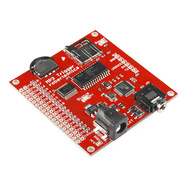 Our popular MP3 Trigger gets an update this week. We're now using the VS1063 IC for the audio stuff and the Cypress PSoC CY8C29466-24SXI for all the heavy lifting. The new firmware also supports FAT16 as well as FAT32 on SDSC or SDHC flash cards. This board is perfect for anyone looking to easily trigger sound files without complex code or hardware. 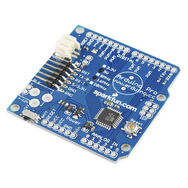 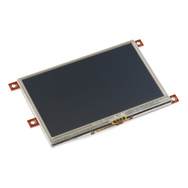 Large LCDs let you display more information. Well, technically higher resolution does that, but larger screens typically have a higher resolution. I digress. The new 4.3" Serial LCD from 4D systems gives you plenty of room for data, buttons, and a slick interface. With a resolution of 480x272 and a touchscreen interface, it makes for a prefect control interface. 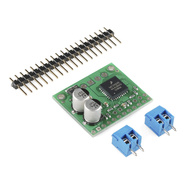 The MC33887 controller board from Pololu has been replaced by the MC33926. Other than a different SKU and part number, they are essentially the same motor driver. The new MC33926 does have 20kHz PWM frequency, where the MC33887 only had 10kHz. So, there's that. 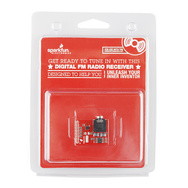 We also have some new retail products this week. The Si4703 FM tuner chip is pretty cool, so we felt it deserved to be included in the retail lineup. The Digital FM Radio Receiver allows you to make your own digital radio module. Using simple commands from a microcontroller you can tune in radio stations, receive radio data, change volume, and more. It even cleverly uses your headphone cord as an antenna. 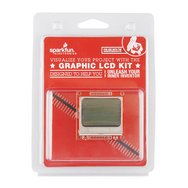 Our extremely popular Graphic LCD has also made it into retail packaging. If you're looking for a graphic display, you can't go wrong with this one. It pretty inexpensive and there's a lot of example code out there for it. The screen features a simple LED backlight and 84x48 pixels of resolution. We also provide a row of headers so you can stick it into a breadboard and start programming right away. 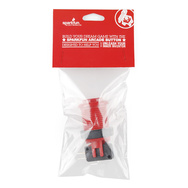 And lastly, the classic red arcade button has made it's way into the retail lineup. The satisfying click, the bright red color, and the nostalgic feeling of putting quarter after quarter into arcade machines.

Well, that's all we have for this week. I think I'm going to take a short break from project-building for the next week or so. The PESTO and SCORPION took quite a bit of time to complete. I always get a bit excited waiting for everyone's reaction to our newest creation. Thanks for reading! We'll see you again next week.