Check out our recap from week one of our East Coast tour!

Recently, two members of SparkFun's Department of Education hit the road for three weeks, traveling around the East Coast teaching technology and connecting with educators and students. I left SparkFun on April 8th with a van chock full of electronics, soldering irons, computers, promo gear and one sales booth. The plan was to drive to the East Coast with a stop in Ohio and another in upstate New York to talk to Kathy Ceceri of GeekMom. Once on the East Coast, after a few solo workshops, I would meet up with Linz Craig (SparkFun Educational Outreach Coordinator) and we would travel through Massachusetts, New York, Maryland, Virginia, North Carolina and South Carolina, teaching or interviewing as we went. 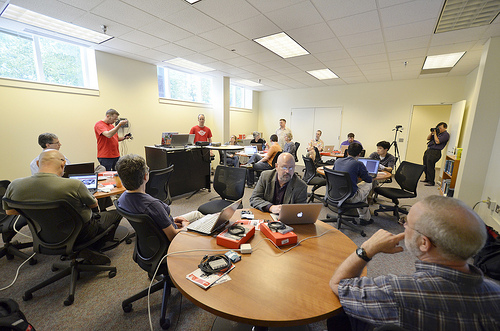 In the past, we've met up with the folks from Laboratory B, Burlington, Vermont's hackerspace. Jesse and the crew at Lab B have been really great about introducing us around to the local scene and they have a vibrant thing going in VT. One of the people we met up with is Jenn Karson. Jenn is one of the founders of Vermont Makers and had contacted us about doing a workshop with some of the people in the maker community around Burlington. The good people at Champlain College gave us use of the Emergent Media Center, and it was great to see the turnout of various people for the workshop. We had a range of people, from software developers and system administrators to high-school students and artists. We banged through Arduino basics with the group and then got time to see the robot brought by Bristol High School do the Hokey Pokey. Many thanks to Ken Howell for hosting and Champlain for the use of space!

The next night we met up in Burlington for a soldering workshop at Lab B. They had requested a “train the trainers” night and we all had a blast building the SparkFun Arduino Compatable Controller. Thanks, Vermont Makers and Lab B! We look forward to the September MakerFaire at Shelburne Farms. 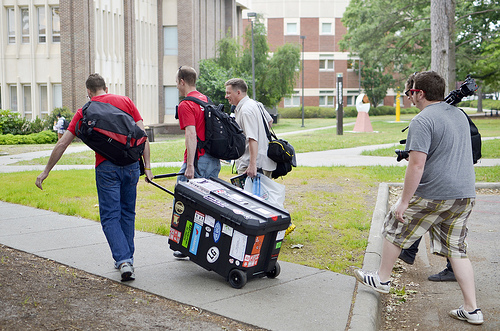 Lugging our gear around was quite the workout.

The third day in town was a visit to the FabLab at the University of Vermont (UVM). The Engineering Department at UVM has been going all-out to establish a FabLab and the facility looks top notch. Ken, Doug and Jeff are starting to do both internal and outreach programs with the FabLab facility and and Vermont is lucky to have this kind of community involvement from the UVM Engineering Dept.

Friday morning was a very early departure from Burlington to drive to Boston and meet up with Linz for the setup for the National School Board Association Conference. There’s a lot of explaining the open-source approach, how it came about, and its benefit to education. Sometimes there are puzzled looks and there is also astonishment at the cool things you can do with the technology. SparkFun does about six of these conferences a year in an effort to spread the word about what we do and how it relates to education in all its forms. 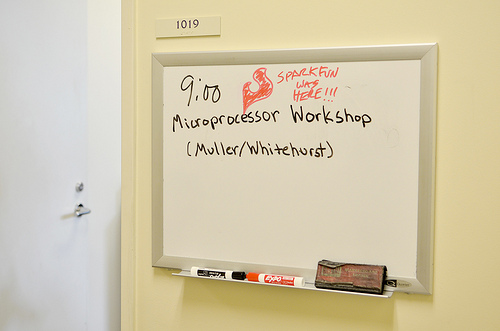 That brings us through the first week - what a whirlwind! We'll do another post soon about the second week of our East Coast tour!