We're excited to introduce you to our latest hackers-in-residence: Sophi Kravitz and Shane Clements!

As you may remember, in August we launched the trial run of our Hacker-in-Residence program. We had a great time hosting hacker super-couple Tara Tiger Brown and Sean Bonner for two weeks as they built their tethered quadcopter, and we considered the test run enough of a success that we're happy to begin formally accepting applications! Ultimately, our hope is that we'll be able to provide the tools and support to help bring some great ideas to life, and meet some of the amazing problem-solvers in our community.

And with that, we'd like to welcome our second batch of hackers-in-residence: Sophi Kravitz and Shane Clements. Sophi, who joined us from New York, is an electrical engineer and owner of MIX Engineering. Shane is a software engineer from Boulder, and is the lead developer of the Scratch programming language, which our Education department bases significant curriculum on to introduce young students to programming. Shane's first order of business is a company-wide presentation about Scratch, after which he'll get down to the serious business of project building. Sophi and Shane will be with us for two weeks, and we can't wait to see what they come up with! 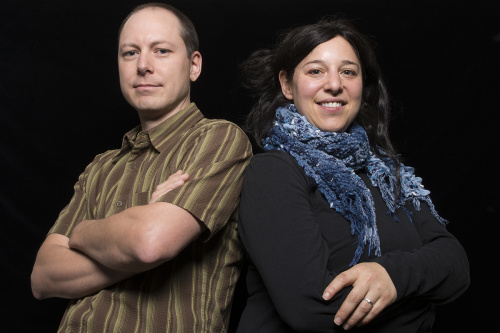 Here are Shane and Sophi. They are very good sports, and we're happy they're here!

What is your background, favorite past project, and current position?

Sophi: I am an electrical engineer and interactive artist. I work for MIX Engineering, which is my own engineering design company. For the past year I've been working with industrial equipment that analyzes solar panels using a process called X-Ray Fluorescence. Some of my recent interactive art projects have used heartbeats to create experiential environments, and a future project plays amplified intestinal noises through wireless speakers - a literal fart joke. At SparkFun, I'll be working with brainwaves.

Shane: My favorite project so far was working on LEGO Universe game for LEGO - a kids' MMO aimed toward 10- to 14-year-olds. I had been working in less creative technical realms before, so to work amongst these very creative people - artists & game designers - was really fun. Two million players ended up going through the game, and it was so exciting to work on something that can bring joy, as well as enable people to create for themselves, and see what they create.

My background is software engineering. After LEGO Universe I went more into web development before coming onto the Scratch team, and now I'm the lead developer on the Scratch app itself.

How and why did you get involved in SparkFun's Hacker-in-Residence program, and why do you think programs like this are valuable?

Sophi: I have gotten to know many creative people with similar interests as me who work at SparkFun over the past few years at Maker Faires and other conferences. I've also made some great friends with a bunch of people who work here, and have become a better engineer using many of the tutorials and videos that SFE posts. When I heard about the Hacker-In-Residence program, it seemed like an opportunity to see if I could come and work and learn with the engineering team. By working with outside hackers and makers, SparkFun can involve many voices from the community - OUR community - in tutorials and projects.

Shane: I met Nathan over Skype at a meeting with Mitch (Resnick) at MediaLab; we emailed and met, and he later invited me to come in. I think the program is important because it highlights some really cool stuff that people are doing, and for these people who are trying these very interesting things, they get to be supported with hardware, resources, and people who know all about this. And from the other side, the people who make these boards get to see how they're being used and pushed to their limits, and that could influence their design of the next generation.

What is the project you'll be working on at SparkFun, and why did you choose this project?

Sophi: I'll be working with Neurosky's brainwave headset to create a hardware interface that makers, engineers and educators can use to create projects that trigger on brainwaves. I am very curious about the brainwave headset (it's called a Mindwave). The Mindwave uses one electrode to measure attention, concentration and eye blinks. I want to see if anything usable can be registered from one sensor intended to get a signal from an object (the brain), that sits inside of a bunch of fluid and then has a skull and hair and skin on top of it.

A couple of years ago I got to ride The Ascent, which uses the Mindwave headset to control the ride. The Rider is strapped into a harness, which is connected to a computer-controlled winch. As the Rider concentrates while wearing the Mindwave, the winch pulls the Rider as high as 30' up towards the ceiling. It was an incredible experience!

I'd like to explore the different applications for this technology, such as using an eye blink to fast-forward your music while running, or wagging a fake tail at ComicCon. Do you have an idea for an application? Put it in the comments!

Shane: I've thought about hardware in the past, but I haven't done much with Arduino, so this should be really interesting, and great to have people who know so much around me to help me work on stuff. Maybe I'll make a toy - it could change, but I could build something out of LEGO, and then make it more exciting by bringing it to life with Arduino. I haven't made something (with hardware) before, so I'm interested to see; it should be fun. 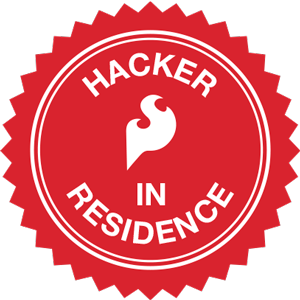 Interested in learning more or applying to be our next hacker-in-residence? You can read about some of the program details here, and apply for the program here. Stay tuned for ongoing coverage of Sophi and Shane's projects, and we can't wait to see who will join us next!