Julián is joining us from Argentina, to work on adding SparkFun parts to his miniBloq programming environment!

It's time to welcome another awesome hacker into our ranks for a couple weeks! Meet Julián da Silva Gillig, who is joining us all the way from Argentina, and whose favorite food is cannelloni de ricotta. Julián is the author of miniBloq and the main designer behind Multiplo. MiniBloq was one of the first drag-and-drop programming environments for Arduino, and is able to switch between many different languages, making it a great global teaching tool. Behold: Julián! 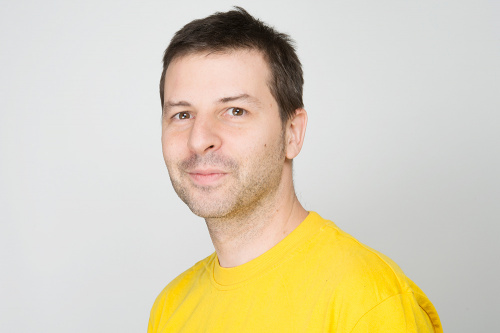 Julián will be working to integrate miniBloq with some of our sensors and other accessories, which will hopefully result in complete Arduino libraries for the hardware. Additionally, the next version of miniBloq will feature some new blocks to control mobile robots at a higher level, like the Rovera, the Sparki and the Multiplo Starter and Building kits. Julián would also like to add some SparkFun robots, like the RedBot, to the next official miniBloq release. WE ARE STOKED. Let's learn more about Julián.

Hi Julián! Tell us about your background, interests, and some favorite past projects.

I worked for some years in software and electronics in different companies, and also was a part-time teacher - mainly of robotics and computing - both in primary and secondary schools. In 1997 I was manufacturing (in my house) low-cost robotics equipment for schools and developed Minibloques, a small graphical programming environment oriented to kids. It was the primitive ancestor of miniBloq, an open-source graphical IDE for physical computing and robotics. In 2003, two friends and I co-founded a robotics startup, where we made some robots like the [Sphinx](http://www.youtube.com/watch?v=eBaEgJSTxFE / http://www.youtube.com/watch?v=i3EoAGZIaWU), a 200 Kg mobile robot with safety purposes in oil wells, and other funny projects, such as a domestic robot used in a TV show, whose brain was a cellphone (it was 2006, so still no Android nor iOS, just Symbian). In 2007 the company split and I joined RobotGroup, an open-source educational robotics company, where I currently lead research and development, specially of the Multiplo building system.

Although my interests are wide, currently I'm trying to focus on two main lines of work: Improving the interaction between non-technical users (especially kids) and systems like robots and other creations, and moving those systems to designs that can be manufactured and redesigned by the users themselves, taking advantage of resources like fab labs, hackerspaces or even the increasing installed base of personal 3D printers and laser cutters.

I have been exchanging emails with Lindsay Levkoff and Lindsay Craig from SparkFun's Education Department since 2011. That year, SparkFun posted about miniBloq's Kickstarter campaign and really helped the project. Then we kept in touch, and even worked together on some tutorials to use miniBloq with the SparkFun Inventor's Kit for Arduino. When we launched the Multiplo open-source building system, SparkFun also wrote about it. In 2012, I received an email to make a workshop, but living in Argentina it was not possible that year. But now, the Hacker-in-Residence program resulted in the perfect opportunity to finally do something together.

I think diversity is one of the most important features of the open source movement, and creating spaces like the Hacker-in-Residence program is vital. You never know which new ideas can be sparked from such an awesome environment.

What is the project you'll be working on at SparkFun?

I will work to integrate into miniBloq some SparkFun sensors and other accessories (like Arduino-compatible LCDs). I also want to add support for SparkFun robots too, like the RedBot, or some Actobotics creations. This also means creating examples and some tutorials, which are one of the most important parts of the work on educational software and hardware. So at the end of the two weeks, there should be a new miniBloq version, which will include the new sensor and robotics blocks created at SparkFun!

Three cheers for Julián! We'll check in with him later in his residency and share any completed results!

The Science of Licking a 9V Battery