A quick hardware teardown on some key-chain games.

Ah, yet another Thursday has come upon us. It's almost nostalgic at this point. Nostalgic like the awkward stories parents tell about your youth while visiting for family gatherings. I lived through my own version of this recently, and while hiding in the basement I came across some old, electronic key-chain toys I had as a child. 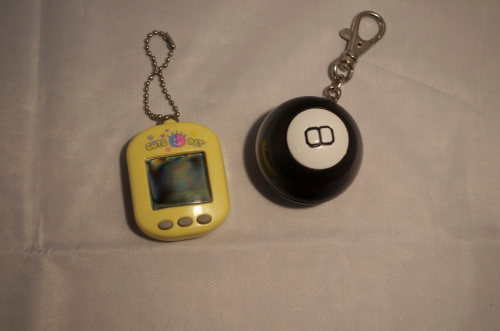 Coming across these toys now, my interests are much less in the games themselves than the hardware that makes the games tick internally. The Cute Pet game is a standard knock-off version of the infamous Tamagotchi pets that first came into popularity while I was a young student. The Magic 8-Ball key-chain was as entertaining to a kid as any regular Magic 8-Ball, but at the time, the fact that it had a digital interface was pretty spectacular to me.

Before I ripped apart my hardware to see what was inside, I figured a quick search online was in order. After doing a bit of research, it looks like there have been many hacks on similar hardware. Natalie Silvanovich has been featured on various sites - including Hack-a-Day, Adafruit and others - for her ongoing hacks on brand name Tamagotchis, and from what I have seen, she is the internet's go-to expert on Tamagotchi customization and hacking.

Along the same vein, Magic 8-Balls have also been hacked over and over, including changing the standard answers to custom ones, along with adding in digital features to a classic analog device. I have yet to find a hack online for the digital key-chain version of the Magic 8-Ball, so if you come across one, let us know!

Because of the similar functionality between these two games, I hypothesized that they may be running on similar hardware. Without even opening them up, one can guess there's an LCD display, and some kind of microcontroller that could process the button inputs and output proper responses, likely with some kind of memory storage for the game data. 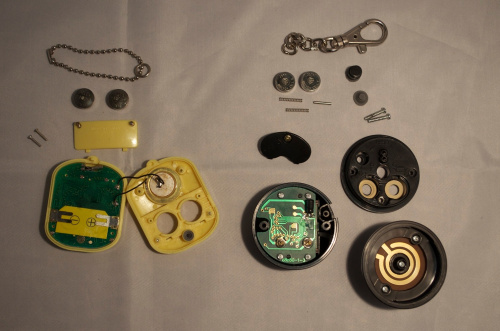 Cracking open the cases, I found the two-layer PCBs exposed, showing a large number of traces. One of the first things I noticed was that the circuits do appear very similar. The button connections have the same PCB layout in the traces on both boards, and the two boards have similar battery connections. Another similarity between the two systems is that both run on two LR44 batteries, a 357a battery, and an AG13 battery, which each have a standard voltage of 1.5V.

I dug further into the assemblies, and removing the PCBs from the LCD screens showed yet another surprise. Both games had the PCB connected to the LCDs using Zebra connectors. However, I still couldn't see the main IC driving the system, so more disassembly was required. 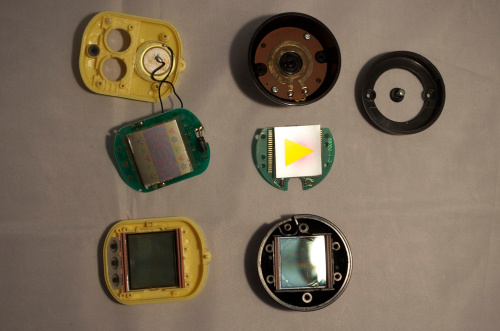 Peeling off the cardboard backgrounds for the LCDs revealed both of the ICs were chips-on-board, with an epoxy covering for each. Just looking at the traces that are visible on each PCB, it's noticeable that the Cute Pet game has more traces running out from the IC. This did seem to indicate that the ICs were different, but without getting off the epoxy coating, there was no way to know for sure.

After some frustrating (and incredibly stinky) time with the heat gun and a hobby knife, I was able to at least get the die of the ICs exposed to verify that there are different chips running each game. Sadly, since they are chips-on-board, I wasn't able to identify them on an initial glance, and will need to spend more time trying to hack into the boards to see if I can find out any additional information on them. 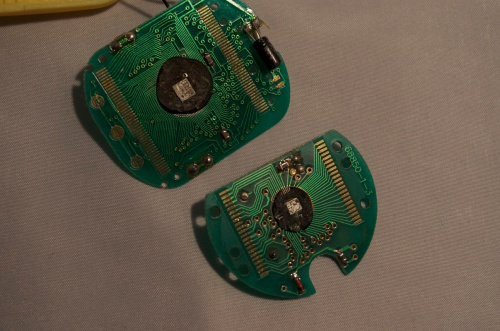 This was a quick hack that doesn't even begin to scratch the surface of the programming on either system, but hopefully it inspires you to try your own personal hacks. For those of you hiding out from the extreme cold or extreme fires, what kind of fun little electronics are you digging into?

National Tour- Virginia to Nebraska and Then Home