The Edison is Not a Raspberry Pi

To compare the Edison and the Raspberry Pi is to do a disservice to both.

A lot of people have been (usually unfavorably) comparing the Edison to single board computers like the Raspberry Pi. 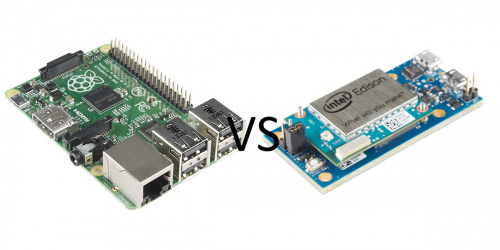 Let's do a little A:B comparison, shall we?

* The above dimensions and prices reflect the Edison with the mini breakout board.

I've been watching lots of comment channels regarding the Edison, and I see a lot of people slamming the Edison as compared to the Raspberry Pi over a few of the lines above:

All five of those points would be valid criticisms if the Edison were a single board computer like the Raspberry Pi. The Raspberry Pi is, and always has been, aimed at providing a low-cost computing terminal that can be deployed to as a teaching tool. Any hardware hackability on the platform has been purely incidental, a bonus feature.

The Edison, on the other hand, is meant to be a deeply embedded IoT computing module. There's no video because your WiFi enabled robot doesn't need video. There's only one USB port because wearables don't need a keyboard and mouse. The processor speed is lower because for portable applications power consumption is important (and you can see above just how much better the Edison is than the Raspberry Pi on that front).

As for cost, yes, the Edison loses big time, until you add the cost of an SD card, a WiFi dongle, and a Bluetooth dongle. That brings the prices much closer to parity, although still definitely not equal.

Finally, the last point: that connector makes a lot more sense when you stop thinking of this as a competitor to the Raspberry Pi and start thinking of it as a competitor to, say, a bare ARM A9 or A11 SoC. The production requirements for any high-end SoC are pretty brutal: micro BGA packages are pretty unforgiving. Integrating the Edison into a product is much easier, and has the benefit of giving you WiFi and Bluetooth (with and FCC ID!) to boot!

Three other things I want to highlight: the presence of the Quark microcontroller in the Edison, the operating voltage of the Edison, and the size of the Edison. The Raspberry Pi, without adding wireless communications devices, requires ~93 cubic centimeters of volume. The Edison and the mini breakout together require ~14. Footprint wise, the Pi needs ~48 square centimeters to the Edison's ~17. That's a pretty serious difference.

The operating voltage of the Edison is perfect for single-cell LiPo operation; it even has a built-in battery charge controller. The Raspberry Pi, on the other hand, requires 5V, so you'll need some kind of boost circuit or bulky battery pack to power it.

Last but not least, consider the presence of the Quark onboard the Edison. While not supported currently, future software releases from Intel will enable this core, allowing real-time processes to run independently from the Linux core, which can be very important in embedded systems with a high cost of failure. It also ensures that stringent real-time applications can be handled without requiring a real-time Linux kernel.

A much more reasonable comparison might be to stack up the Edison against the Raspberry Pi Compute Module; I'll leave that as an exercise to the reader.

The final point I'm going to make: the Edison can be used with the Arduino IDE, but you'll get the most mileage out of it by using other programming methods. However, those other methods (it supports GCC and Python, and Node.js, RTOS and Visual Programming will follow soon) are not for beginners. We will, of course, be adding tutorials, projects and examples soon- especially once our Blocks start to hit the storefront!