Hackster Project of the Month

Every month we'll highlight a project on Hackster that catches our fancy.

Congratulations to robot256, who won the March Caption Contest with the caption, "Almost immediately, Dave regretted using his largest LiPo in the motion-activated Rick Astley bust." A SparkFun Simblee BLE Breakout and the RFDuino Simblee Starter Kit are headed your way!

Back when we announced a more formal partnership with hackster.io, I mentioned that we’d like to highlight some of the projects submitted each month. It took us a little while to get started, but here we are. Welcome to the first installment of the Hackster/SparkFun Project of the Month!

The criteria couldn’t be easier: I pick a project I think is cool, and we show it off. I’m willing to take suggestions from those around me, lobbying from people with cool projects, and even the occasional prodding from the company internally, but sadly, no bribes. The best way to get connected is by having a fun project with a lot of SparkFun pieces and great documentation.

With that said, this month I picked a project that isn’t even written up in English yet! 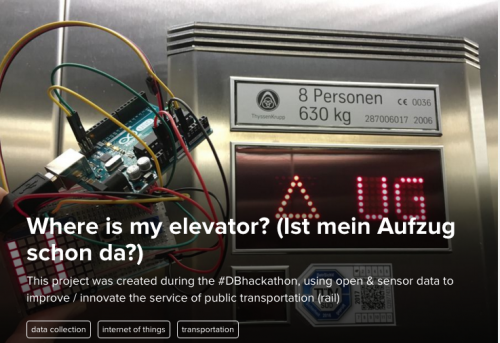 Fab-lab.eu created a cool IoT project that gives people real-time elevator information. He mentioned that the project was part of a hack-a-thon, and he was able to walk away with a special award for the project. "Where's my Elevator?" is centered around the ESP8266 Thing board, and if you go to our product page, you will see that a different Fab-lab.eu project is currently our featured project for the Thing board!

I have a soft spot for anything that will make using public transportation easier, as I lived in Washington D.C. for many years and there were always elevator and escalator outages. Having a smartphone system for awareness and information sharing would have been useful.

Fab-lab.edu had a lot to say about the origins of the project. "Data exploration was key for the project...using a couple sensors like the BME280 and an air quality sensor," he said. "Both were used to explore the status of the elevator; first to locate via air pressure (barometer) the level at which the elevator is currently, and the second to detect the 'smell' within an elevator, especially during heavy usage." Collecting and learning from that data was a great benefit of the project.

I'll let Fab-lab.edu explain. "While exploring the data (thanks to data.sparkfun.com) we could even see that when the doors of the elevator were opened, the air quality sensor was detecting a significant change ... we could detect the time the elevator was parked at a given level, or the travel time between levels. All that gave great insight into the daily operation of elevators, which now can be used in a retro-fit type of application to enhance the elevator operation, predictive control and service."

He promises that he’ll have a English translation for the project soon (you can see it in German now), but the design and code are readable – well, to me at least. 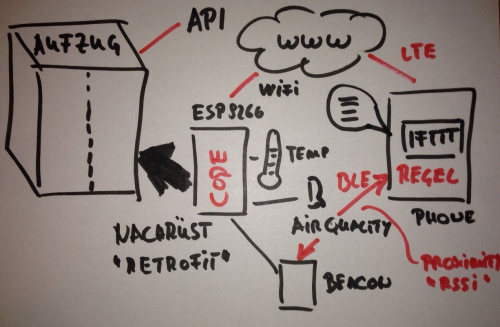 As you can see, the project was built for the ESP8266 Thing. The implementation was thought out down to the connection methodology, and clearly highlights how the elevator (here the ‘Aufzug’ – thanks for confirmation, Google Translate) will talk to the phone. 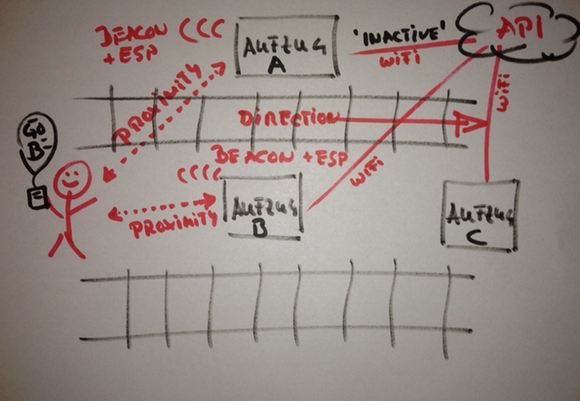 The second diagram puts together a nice use case of a happy commuter getting information about the closest elevators. The code at the bottom will show you how to piece everything together. It even connects to data.sparkfun.com as its IoT data store.

There you have it, an overview of "Where's my Elevator?" created by Fab-lab.eu, an active and engaging Hackster user. Check out other project by Fab-lab.edu, and get inspired to create today! Then upload those projects for a chance to be next month's featured project.