Join us for an epic journey into design for manufacturing, voltage spike suppression, stress testing, hex file analysis and more!

We are very excited to have a new version of the IOIO-OTG available. It includes some improvements to the power protection circuit and firmware updates. In this blog we will tell the rather lengthy story behind all the challenges and solutions discovered during the revision process.

If you are new to the IOIO (pronounced yo-yo), it is a nifty piece of hardware that lets you combine the functionality of an Android device (tablet or phone) or a PC/Mac with that of a microcontroller. You can write your own application (in Java) and directly control the I/O functions on the IOIO board.

From vision-guided rovers to motor-controlled marker caricature booths, there are some truly amazing projects out there using this board. Check them out at Ytai’s Pinterest page here.

The latest hardware and firmware can be found here.

We heard from Tech Support that the IOIO-OTG (v21) had been failing for some customers. The failure was related to the fact that they were using long power supply cables at voltages close to the upper limit of the IOIO. We didn’t see this problem in production because all of our functional testing had been done with shorter cables.

It turns out that the on-board switch voltage regulator was failing when it saw large spikes on the “VIN” line. These spikes were only present when using longer supply cables, due to their higher inductance. Ytai Ben-Tsvi (the outside collaborator on this product) and the engineers at SeeedStudio came up with a clever solution, using some fairly cheap parts to clamp down on any spikes over 15V. 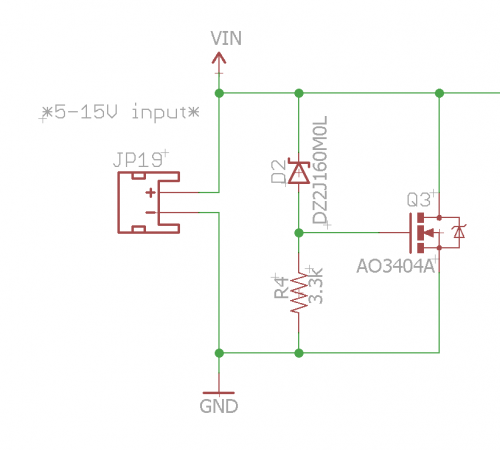 To test this out, we threw some spikes at it and took some screenshots of the scope:

Some details about the test setup:

v22 (includes the new clamping circuit) - stops at around 18V (the rated maximum being 20V) - wahoo!

After verifying on the scope that the new circuit was performing as intended, we considered this portion of the revision complete. Now onto the other issues!

Some users were experiencing failures on the voltage regulator chip when accidental large surges or shorts to GND happened on the 5V rail. It turns out we were missing a decoupling cap on the AVIN pin. The datasheet calls for this, but in our original design we overlooked this critical component. Its absence might cause the switching circuit to become unstable and fail in response to line or load spikes.

In order to stress test this new circuit, we built up a jig that had four loads/test conditions controllable via push buttons:

To wire it up, we used our Solder-able Breadboard. This was the first time I used this board on a project, and it sure was handy! Other parts included the Power Resistor Kit and big push buttons.

The following four conditions were used to stress test the 5V power rail on the IOIO circuit:

The plan was to bang on each switch several times with the IOIO connected to a high-current power supply, and change the input voltage between 5V - 15V at 2V increments.

In order to truly ensure that the test apparatus was working as planned, we put a couple of the older versions (v21) through the testing. We were able to damage the voltage regulators when using a LiPo battery as the source. Using a LiPo battery (rated at 25C) ensured we would not be artificially protecting the circuit by limiting the input current.

The prototypes tested out, but this was only three units. We wanted to have a larger data sample to truly know this fix was robust and sleep better at night. We ordered more PCBs and had production build up another 104 units. They all received rigorous stress testing, and not a single one failed. We then knew we were ready to move forward with the latest hardware: v22b.

A Mysterious Failure in Production

On bootloaders previous to version 4.01, the IOIO would occasionally have problems calibrating its oscillator during SparkFun production. Fortunately, this problem did not affect the end user, but it was quite frustrating for us in Production. After we program each IOIO board, we connect the board to a USB port on a Windows machine. It uses the very precise USB frame clock to calibrate its own internal oscillator. Sometimes this would not work properly. On some production runs, close to 30 percent of the boards would fail on first attempt. For the past couple years, we have had our technicians simply try again (and sometimes four or five times) in order for it to take properly.

Some technicians actually developed a “magic touch,” where it seemed that the right amount of pressure while plugging in the USB cable, at the right speed, while standing on one leg, would get the IOIO to calibrate properly.

We thought it may have something to do with the USB cables themselves, the USB connector on the IOIO, and/or the difference between an OTG and standard microB.

Eventually, we stumbled upon a solution that involved using a modified USB cable that terminated to an OTG-style connector. The test procedure became a three-step process, and our technicians would plug in three separate plugs in the correct order. This became known as “the magic sequence,” and worked great as a band-aid fix for the past few months. 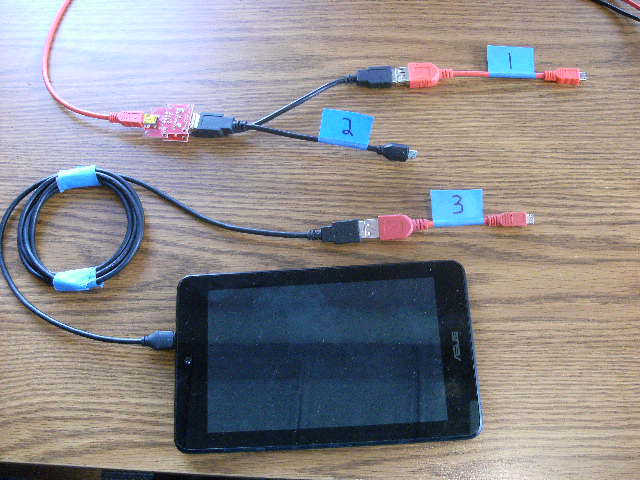 Seeing this strange solution work 100 percent of the time led us to investigate the USB ID line. After all, this is the main difference between a microB and and OTG connector. Checking the ID line on a scope showed that it was working identically on both cables.

Unfortunately, after analyzing the readings on the scope, we concluded that it has nothing to do with the USB ID line, and so the wild goose chase continued.

Victory is near. It’s all in the hex files.

We finally exposed the problem by comparing hex files. Using a “bad” IOIO, we read the entire hex data of the micro before and after a successful calibration using the hacked OTG cable. Comparing the two hex files we see the following:

The 0xFF that we see on the “before” hex file indicates that the IOIO never completed calibration. If we look at the calibration code, we can see that the only way to not complete calibration is to not start calibration, which would happen if we never saw the POWERED_STATE happening.

With this in mind, Ytai suspected that on the "bad" IOIOs, the contacts were such that a data connection was established at about the same time as applying power (VBUS). So, in many cases the USB state machine would advance two states at the same call to USBTasks(), and we would never actually observe the POWERED_STATE. The medium blinking pattern on the STAT LED was a result of the IOIO being in a later state, which happens to have longer code in the path of USBTasks(). Since the blink rate is proportional to the USBTasks() execution time, this was the result. So really, the medium blink pattern was the "I'm not calibrated" blink, with a "fatter" USBTasks() call in between. 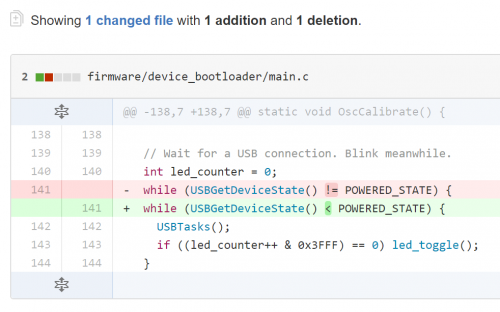 It is still not 100 percent clear why the magic hacked OTG cable worked. One likely possibility is that the mechanical design of the connector is playing into timing. OTG cables have the GND and VBUS pins offset, so they touch first. Having a little time between applying VBUS and detecting activity on the data lines may be just enough to spend at least one USBTasks() call in the powered state before advancing past it.

This might also explain why plugging in the normal cable very slowly at a certain angle might have achieved a similar result.

Either way, it came down to a very slight tweak in the code. It’s crazy how sometimes months of work will culminate in changing a couple characters. I love Ytai’s commit message: “device_bootloader: Fix mysterious bug!”

Since this update, we have seen great success on the production floor. Repeating attempts to calibrate are truly a thing of the past!

Another change to the design was switching all the graphics over to “vector style.” The previous graphics were drawn as millions of pixels. This leads to extremely large Gerber files, and can take even a moderately fast computer upwards of 12 hours to complete the conversion from Eagle layers to Gerbers, especially when it's a large, panelized version of the design for production. This isn’t the worst thing in the world, it just meant that we had to plan to leave the CAM job to run overnight. If for some reason it hiccuped during the night, this would delay the ordering of PCBs another day. This was also a huge headache for our purchasers. Most of our board files (Gerbers) are sent to our fab houses via email, and it’s not ideal to send an email out with a multi-gigabit attachment.

It's difficult to see in the image above, but if we zoom in a bit and highlight the polygon outlines, you can see that the graphic is truly drawn with polygons: 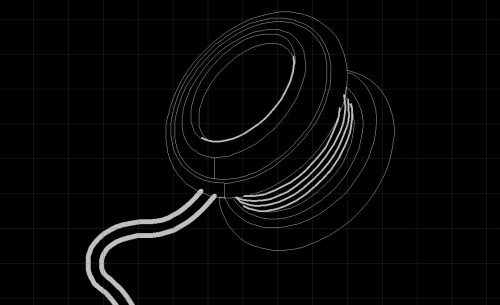 This change is definitely one of those things that happens under the radar. For most people, they won’t ever know the difference, but for our production and purchasing folks at SparkFun, it was a huge improvement. High fives all around!

We also updated all the passive components to the correct 0603 package. We had previously been populating 0603 parts on 0402 footprints. This works, but it is very difficult for our automatic optical inspection (AOI) machine to inspect the solder fillet on either side of the component. This took some delicate nudging and re-routing in the design, but it was well worth it in the long run. Plus, who doesn’t enjoy the puzzle of a tight layout in Eagle?

Another change related to AOI was the fact that we removed the solder-mask in between each leg on the PIC24 microcontroller. Because this solder-mask is white, our AOI machine gets a bit oversaturated and doesn’t do well inspecting the lead solder bank for jumpers. Previously, we had to remove these inspection points from the AOI recipe. With the mask removed, it does much better, and we can actually utilize these inspection points! Wahoo for quality control!

We also modified the layout around the USB connector to make it more robust. The mounting pads now have “staking vias.” These allow some of the paste to flow down into the via and add strength to the SMD pad. We also included a mounting polygon drawn around the connector on the top copper. This effectively increases the area of copper holding the part to the FR4 material. 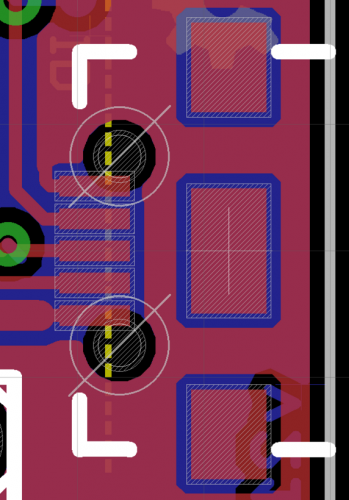 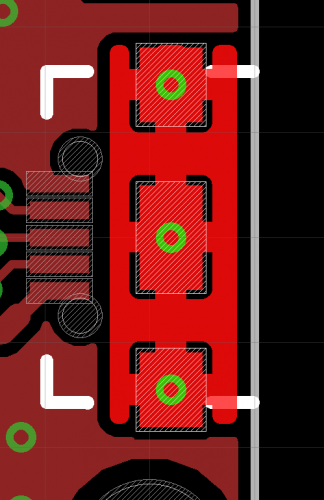 The firmware for the IOIO is continually improving. There is a very active community of users collaborating on GitHub. We are shipping the latest stable release of the bootloader and application. Please see the release notes for all the specific updates. 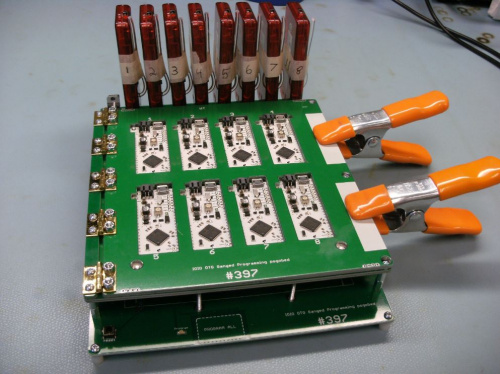 We have two of these beasts on the production floor, so it takes a little while to get the firmware updated on all 16 PICKit 3s. They work great as stand-alone programmers for PICs!

While working on and completing this revision, we definitely learned some important lessons:

We hope that you can learn from our experience with this rather lengthy revision. Maybe this story can help you troubleshoot a similar problem, or anticipate weaknesses when developing your own product! We hope you enjoy the new IOIO-OTG, and that the improvements will help you get your project to completion with minimal hiccups. If this is your first time using a IOIO, be sure to checkout the Wiki page for help getting started.

Hackster Project of the Month