T³: Making a Dark Node out of the Edison

One idea for hosting a web page or browser game at events with no Internet connection.

This weekend was Maker Faire Bay Area, and one demo I brought was not very visual (at least not at first glance). I turned an Intel® Edison into a WiFi access point and served a simple arcade game to people's smartphones. 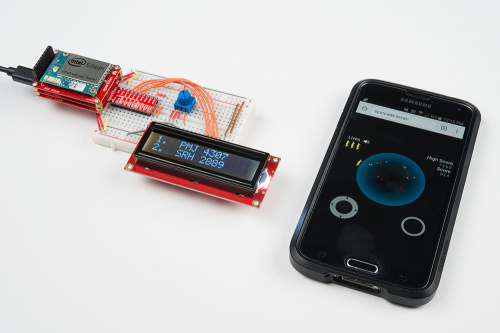 I placed a sign next to the Edison that provided instructions on how to connect to the Edison's access point and request the website. People were presented with a Phaser browser game based on Tempest. 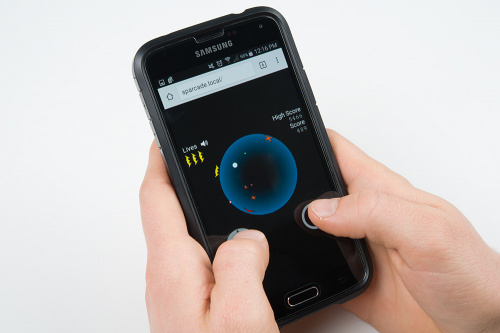 When the player eventually died, their score was sent back to the Edison server, which compared it to the current list of top 10 high scores. If the player ranked in the top 10, the server sent a request back to the client, and the game requested the player's initials. The Edison maintained a list of the top scores and displayed them on a connected character LCD.

A few people tried it, and it started some conversations with old-school Tempest fans. I also brought it to the BringAHack gathering Sunday night. I bought a drink for the player with the highest score after an hour. This proved to be a great way to force me to socialize.

Anybody at #BringAHack, I have a challenge for you. @pdp7 pic.twitter.com/ydoeazBQHq

If you are curious about making your own dark node game server, check out the tutorial below:

Sparcade: Edison as a Web Server for Browser Games

Turn the Intel® Edison into an access point that serves a simple browser-based game. High scores from the game are displayed on a character LCD.
Favorited Favorite 2

A playable version of the game (without the top 10 score list) can be found here: http://shawnhymel.github.io/Vortex/.

I'm looking for ideas on how to take this further. For example, broadcast a puzzle game from within a locked chest that people would have to solve to open the chest. What are your thoughts?