If you read my last Enginursday post, you saw that I've been tinkering with Teensy Audio. I'd like to take this opportunity to unveil a what I've been working on since then.

The design files for the whole thing are on GitHub. I'll admit that I've been working quickly, and the repo is somewhat roughshod. This very post is an attempt to document the underlying design!

The hardware is fairly simple. The heart of it is a Teensy 3.2 with the Audio adapter. The buttons and LEDs are attached to the processor via the SPI bus, using daisy-chained shift registers. Every otherwise unused ADC channel has a potentiometer on it, for a total of sixteen. 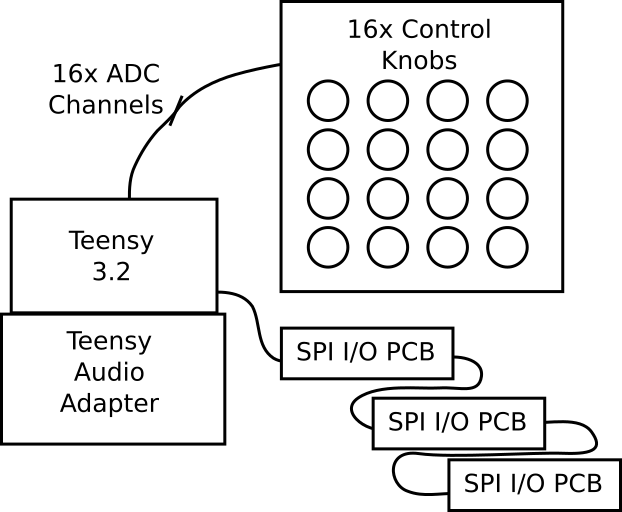 The enclosure is a combination of technologies. The control panels are made from laser-cut acrylic, while the wooden ends were milled with a Shapeoko.

The signal processing in TeenyBoom is built out of Teensy Audio modules. They further break down into modules already present in the Teensy Audio libraries, and new ones that were written specifically for this project. 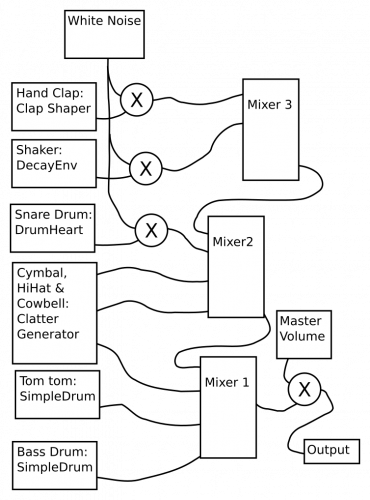 A lot of the "plumbing" is from the Audio library - the filters, white noise source, multipliers and mixers.

Most of the drum-specific tone generation was written for this project based on analog circuit emulation. All of the sound is generated mathematically, and doesn't involve any prerecorded tones.

The bass drum and tom-tom are two instances of the "simple drum" module. The snare drum is a related module that allows white noise to be added in. The hi-hat, cowbell and cymbal share a central module, the Clatter Generator, with design informed by the TR808 cymbal analysis paper by Werner, Abel and Smith. (There's also a related [bass drum]((http://www.dafx14.fau.de/papers/dafx14_kurt_james_werner_a_physically_informed,_ci.pdf) paper, but I didn't discover it until after selecting a different implementation). 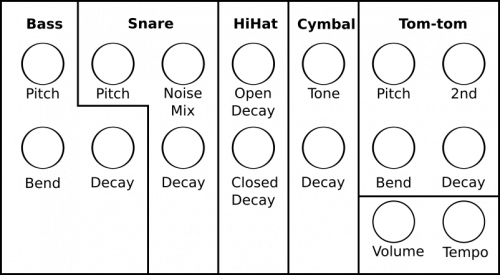 Mapping of controls to voice parameters.

Control over the sound parameters is done with the processor ADC. It reads the potentiometers and updates the corresponding values in the synthesis modules.

When I started this project, I had a number of requirements for the software. The basic composition and playback scheme is borrowed from the Roland TR series, with a few additions and improvements.

The application is written as an Arduino sketch. To keep things organized, it follows a variant of the "Model-View-Controller" design pattern. 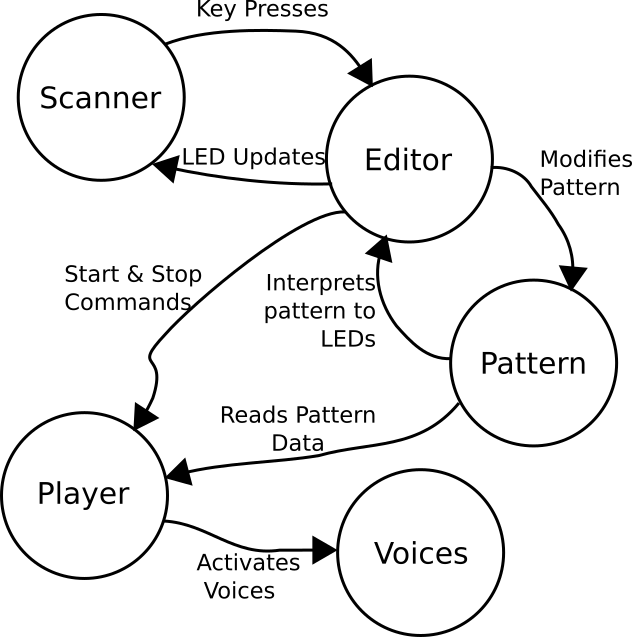 The View is how the system represents data to the user. The LEDs on the control panel are an obvious aspect of this, but they're only a small part of the system. Since the sound generation also delivers information to the user, and is more important and complex, I count it as part of the View.

The Model contains the data in the system. In this case, it is a data structure that represents the Pattern being played.

The Controller gathers input - it's how the user interacts with the model (eventually pushing information back to the view). The user presses the buttons and twists knobs to generate input, which are interpreted into changes in the model and view.

It can be hard to rigidly apply MVC to an embedded system, because the underlying concepts don't always translate (for instance: because they share an SPI bus, my controller input and view output are tightly linked). Still, there is significant value in dividing the work into sensible portions, and partitioning the system into a set of smaller modules. It keeps things organized, making extending and debugging the system easier.

It's easier to determine why an LED is mistakenly stuck on if the LED update code is in an identifiable area!

This is the most ambitious project I've ever written in Arduino. I've stumbled on a couple of issues related to organizing and managing the project.

The biggest issue is relatively simple: the Arduino IDE gets cumbersome if you've got too many files in the project. Once the tab-bar across the top of the Arduino IDE is full, it doesn't handle additional files gracefully. The solution was to create an additional library for the DSP classes. As the signal processing code reaches maturity, it gets moved into the library, where it doesn't crowd the IDE.

While it's in good enough shape to demonstrate, projects like this tend to grow organically: dream up a feature, implement it, repeat until finished.

As I said above, it has its own GitHub repository. You're welcome to clone & mutate as you see fit!

The Web of Things Kit