Increase the range on your 2.4GHz IoT devices with these simple antenna hacks.

Many inexpensive IoT development platforms rely on PCB and chip antennas to offer a WiFi or Bluetooth connection in the 2.4GHz Industrial, Scientific and Medical (ISM) band. Chip and PCB antennas offer a cheap, compact solution that fits onto a single board, which is often all that's needed. They are also a good option if you really do not want a visible antenna on your final design. 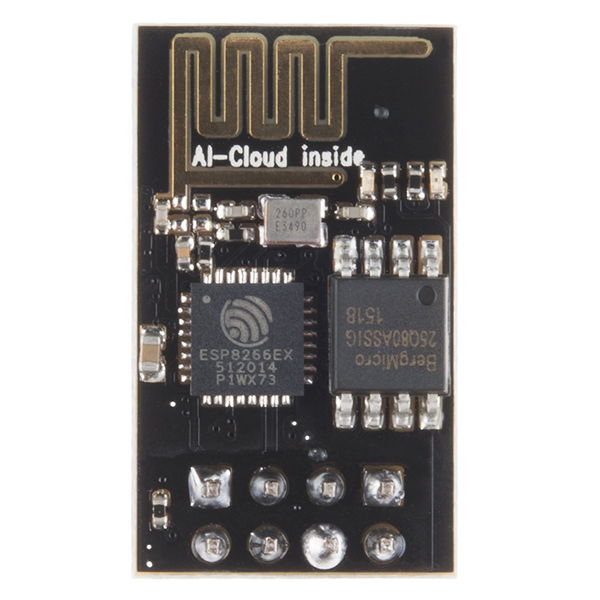 The ESP8266's PCB antenna is clearly visible on the edge opposite the headers.

That being said, PCB and chip antennas can be a poor choice for a few reasons:

If you are attempting to shield your internet-connected environment sensor suite from the elements, you'll likely want to consider mounting an external antenna onto your project to improve your connection. Some boards, like the ESP8266 Thing Dev, allow you to attach an external antenna to the onboard U.FL connector. Just note that you might have to move some solder around to make it happen. 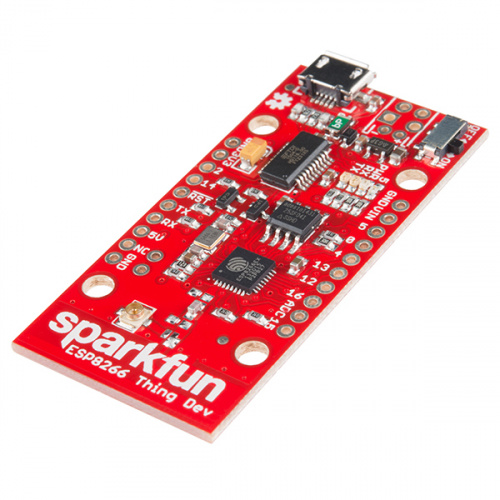 The SparkFun ESP8266 Thing Dev Board is a development board that has been solely designed around the ESP8266, with an integra…

Buying a good antenna can be expensive, and in the world of do-it-yourself (DIY) electronics, nothing beats making your own antenna out of household items. The three suggestions listed below are most certainly not omnidirectional. They are intended to help boost your range (gain) in a specific direction, which is why they're known as directional antennas. You can learn a bit about omnidirectional vs. directional antennas here.

Disclaimer: I am not an RF engineer, and I know very little about antenna design and testing. The following homemade antennas were made by people with a lot more knowledge than me, but I can't guarantee they were tested in any official capacity. Make them at your own risk (which is, honestly, the fun part).

Ian Buckley's MakeUseOf article covers how to find a good can and turn it into a waveguide.

As it turns out, many store-bought aluminum cans are the perfect shape for a 2.4GHz waveguide (this tool will help you determine the perfect dimensions for your can). From Ian's post, you'll want a can that is as close to a 92mm diameter and 147mm length as possible. You then attach a copper wire to an N-type connector to make a probe that's inserted into the side of the can. Depending on the type of cable and connectors used, you can potentially convert it to a U.FL connector to mate it to your development board.

If properly constructed, you can see a large increase in the range of your wireless connection; just be aware that Cantennas are highly directional, which means you'll need to point the open end of the can toward your target (e.g., WiFi router). Some people report being able to maintain a connection over several miles with Line of Sight (LoS) in open air.

Biotele creates a Yagi-Uda antenna out of paper clips and popsicle sticks on Instructables.

The Yagi-Uda antenna, commonly known as a "Yagi antenna," was invented by Shintaro Uda and Hidetsugu Yagi in 1926. Prior to cable television, This type of antenna was commonly found affixed to roofs providing high-gain VHF and UHF television reception for many homes. The Yagi-Uda antenna typically consists of a driven element, a reflector, and one or more directors, where the reflector and directors are simply metal rods. The more directors on the antenna, the more directional the beam, which results in higher gain.

Making your own Yagi-Uda can be done very cheaply and requires only a few common tools. Instructables user Biotele shows you how to create your own 2.4GHz Yagi-Uda antenna with paper clips and popsicle sticks. MacGyver would be proud. Biotele claims to get an LoS range of 2 miles with this makeshift antenna. 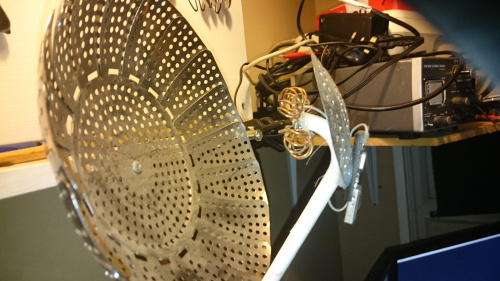 While more difficult to construct than the previous two, a circularly polarized antenna allows you to communicate with linearly polarized antennas oriented vertically or horizontally (just watch out for nulls). This is useful if you need to, say, talk to your Bluetooth devices in a garden outside your house.

Hackaday.io user HexHammer.Jez shows you how to build a tripole antenna to extend the range of Bluetooth (or anything in the 2.4GHz band). This antenna has a wider beam width than the Cantenna or Yagi-Uda, but HexHammer.Jez reports an LoS range of about 150 meters using an off-the-shelf USB Bluetooth dongle.

While you can certainly bump the transmit power to get more range (within the FCC limits, of course), using a directional antenna will offer a better connection between your IoT device and base station, assuming you have line of sight and your target is in the main lobe of your antenna (multipath interference can wreak havoc on wireless communications).

What are some other tricks you can think of to maintain a good wireless connection between devices without needing to bump up the transmit power?

According to Pete: Point-to-Point Soldering

Hardware Hump Day: 3 Easy Robots You Can Build This Weekend