Want to talk to multiple I2C sensors but have only one address? No problem.

We posted the Robotic Finger Sensor two weeks ago. The VCNL4040 only has one set I2C address. What if you want to have a robot with multiple fingers? 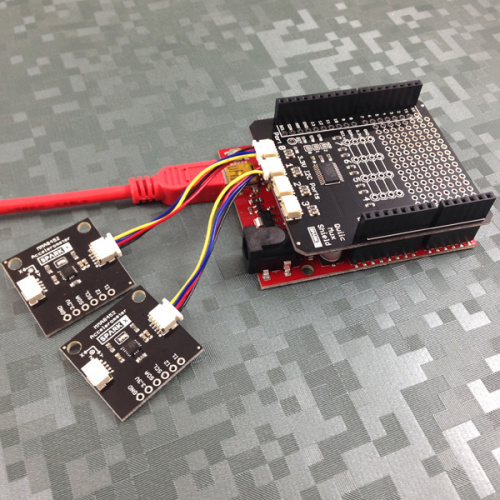 **The product has been retired.** We recommend you use the [Qwiic Mux Board](https://www.sparkfun.com/products/14293) instead…

The Qwiic Multiplexer Shield solves it! Easily too. The PCA9548A has 8 to 1 I2C buses. It takes a second to wrap your head around what it's doing but once you get it, it's brilliantly simple.

Whatever your Arduino code does after that function call the Arduino I2C lines will talk back/forth with whatever is connected on port 3. It's that simple.

Talking to two devices with the same I2C address looks something like this:

It's a neat little part that opens the door to deploy vast arrays of the same sensor. Hope you enjoy!

A111 Pulsed Radar Board gets Sparked with GroupGets!