A lot of the questions we field are related to accomplishing something cheaper via DIY. Until recently, chances of succeeding were variable, but things are starting to change.

In a previous blog post, I wrote about the many flavors of DIY – specifically that it's not always about saving money, so please keep that in mind. In addition, the term off-the-shelf could mean a multitude of things. For the purpose of this article, off-the-shelf means complete, ready-to-use consumer electronics.

About six years ago, I worked on SparkFun's tech support team. During this time, I spoke to a ton of people who did not want to accept the price of off-the-shelf goods, felt they could do better themselves, or a combination of the two. To the credit of a few, they were able to. But for others, a lack of know-how or hidden/unexpected costs quickly roadblocked them. Even some that did succeed found the non-monetary costs to be much more than they had planned.

While I haven't been in tech support for some time now, I have no doubt that they still field these kind of questions. However, things are becoming a lot different now. The idea of doing it yourself for cheaper is a much more attainable goal. So what's changed? 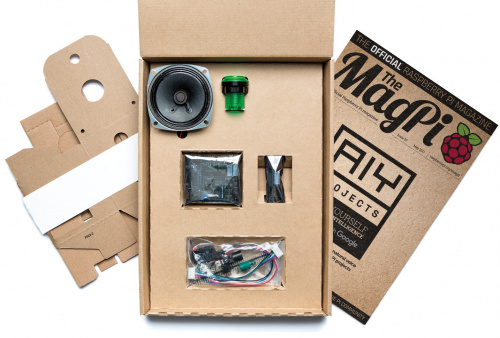 The Raspberry Pi Google Home Project that comes with this month's issue of MagPi is a perfect example of factors that make consumer electronics from a company like Google easy and inexpensive to replicate yourself. Photo from the Raspberry Pi Organization

Expansion of the Community

Plain and simple, a bigger, open community means more resources are readily available. The late 2000s and early 2010s were big stepping stones toward what the maker/hobbyist/DIY community is today. During that time, a lot of what are well-known resources today were in their budding stages (Instructables, StackExchange(Overflow), etc.). The places to easily find bits of helpful code or instructions were coming together, but the information was few and far between. Today, those structural elements have held, and have resulted in great libraries of code and tutorials that make finding the answers and guidance you need that much easier.

This may seem fairly insignificant for those with formal education or experience, but anyone who has set out to complete a project like this will tell you that this saves a lot of time that would otherwise be devoted to yak shaving. Having most of the answers in a few easy-to-search spots saves a world of time and keeps the project on track and feasible.

Larger Recognition of the Community

A large amount of the openly available hardware libraries and code have some link to a company, or were created as part of a contract. I bring this point up in a positive light. To me, this represents a few things: companies embracing open source ideologies (huzzah!), and companies recognizing the DIY/hobbyist/maker/creator community. This recognition tends to benefit a broader audience than those it's intended for.

Writing a large, intensive piece of software can be a tough pill to swallow for a hobbyist. Is spending that time on a project really worth the stress and effort for something that you ultimately want to accomplish at a lower cost? Having software from larger organizations through the magic of open source closes a huge hole when attempting to DIY for cheaper than off-the-shelf.

In addition to software benefits, larger recognition from bigger semiconductor companies has changed how they push development boards. The kitchen-sink, $300, everything-you-need boards are still prevalent and still work really well for some prototyping aspects. But more recently, we've seen releases more akin to our breakout boards or Arduino shields. This means companies are recognizing that inexpensive interface boards catch the attention of a much broader audience. (At this point I hope you're saying, "Who cares when I have places like SparkFun, Adafruit and Seeedstudio?" I see it as these companies paying more attention to you, rather than the publicly-traded company's R&D lab.)

Beyond the DIY community's expansion, there has been a large shift in how the community thinks of completed projects. Maybe it's a side effect of social media, but personally I see it as the community recognizing the value of sharing information more readily. Obviously an increase in standardized platforms and websites has helped, but without the community's active and ongoing contribution, these places wouldn't be nearly as valuable. Chances are, someone else has done something similar before you. While the project might not be exactly the same, it could still hold value when it comes to advice and possible pitfalls.

Unless you're like this gentleman (really cool watch if you have 20+ minutes), who bought all the parts for an iPhone from Shenzen electronics markets, chances are there's no way you're going come close to the price Apple can make the phones for. Products with markets that large, and the manufacturers' ability to use the same parts for multiple devices in large manufacturing runs, means that economies of scale will price you out of beating off-the-shelf very quick. But with newer devices, especially IoT, the demand and production runs are much lower. A lot of the cost savings you would see with production runs for things like mobile phones simply cannot be reached by these products, making it much easier for a DIY solution to have a chance of being cheaper.

I have my own opinions about sites like Alibaba that I won't repeat here, but I won't pretend this isn't an advantage for DIYers. Chances are you can find the LCD screen you need for an e-reader, with the driver board, for a great price. With places like this gaining popularity, it's easier and easier to find the unique part you need at a manufacturing price. There are pitfalls with shopping at places like this, but you'll find many success stories.

The ability to replicate off-the-shelf products will get easier and easier as resources progress. Equally, the more you invest in these resources on your own (honing/learning skills), the easier it will be for you. Again, this isn't for everyone. I personally pick and choose my battles with such endeavors, limiting them to projects where I feel I can improve on the final product. But the one request I have is that if you succeed in DIYing at a cheaper price, be sure to pass on the knowledge you gain.