Let's recap a fun DIY build from last month and examine how those infamous Imperial hover bikes were made for "Return of the Jedi."

In case you missed it, electric bike manufacturer Lithium Cycles converted a Super 73 into a Speeder Bike straight from the set of "Return of the Jedi."

They even got YouTubers Jesse and Casey Neistat to make a pretty sweet video of riding the bikes through Manhattan. This tells me it was a publicity stunt, but you know what? I like it.

For whatever reason, the number of Star Wars DIY projects in 2017 seemed to pale in comparison with 2015 and 2016, so this was a great build in anticipation of Episode 8.

Considering Speeder Bikes were some of my favorite vehicles from the original trilogy, this fun electric bike conversion made me wonder how they designed, made and filmed the hovering bikes in the movie.

While conceptualizing the third Star Wars movie, George Lucas asked for a "rocket-powered scooter," which was eventually renamed "Speeder Bike." Ralph McQuarrie, the visionary concept designer and futurist behind the original trilogy, worked with Nilo Rodis-Jamero, the costume designer for "Return of the Jedi." Rodis-Jamero's "scooters" were blockier, while McQuarrie's were much sleeker with little thought given to the engines or power source. 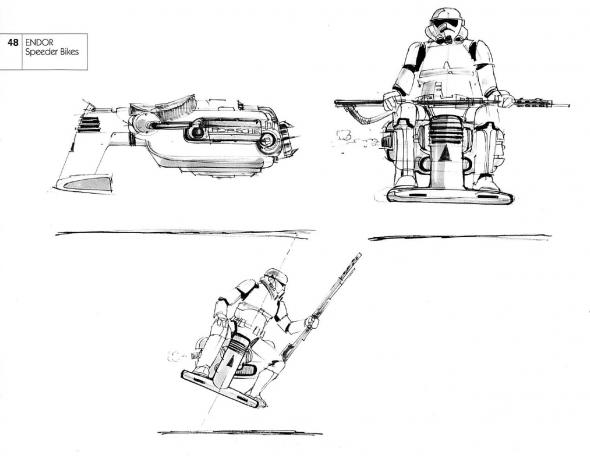 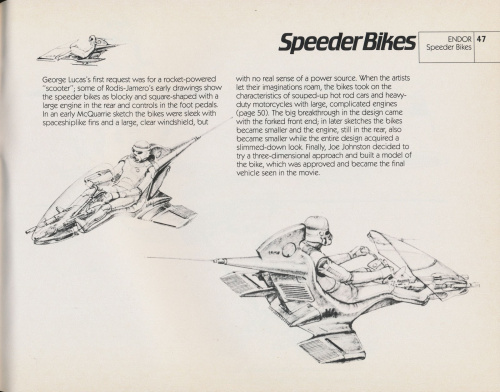 Ralph McQuarrie's scooters. From "Return of the Jedi Sketchbook."

Joe Johnston, the visual effects art director for the film, took these designs and brought them even closer to what we know today as "Speeder Bikes." 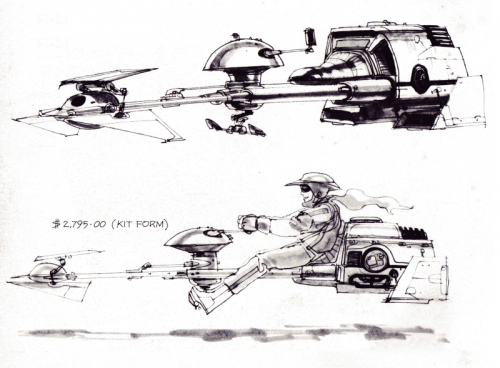 Joe Johnston's Speeder Bikes. From "Return of the Jedi Sketchbook."

You can see more of the Speeder Bike concept art on Film Sketcher.

To film the famous chase scene, cameraman Garrett Brown was strapped with a steadicam and instructed to walk painfully slowly through a section of redwood trees in Northern California. The camera took video at about one frame per second and, when sped up to 24 frames per second, gave the appearance of flying through the forest at over 100mph.

Blue screens were used to superimpose actors and props to give the appearance of a high-speed chase through the forest. Special effects artist for "Return of the Jedi" Dennis Muren tells us about some of the impressive tricks they used:

Some of the most spectacular sound effects for films came from the mind of Ben Burtt, who created the iconic sounds of blasters, starfighters, lightsabers and so much more for the Star Wars universe. Burtt created the Speeder Bike sound by mixing the recorded sounds of an NAA P-51 Mustang and Lockheed P-38 Lightning airplanes. You can listen to the sounds of a P-51 and P-38. I can't hear a Speeder Bike in there, but maybe you will.

Learning how the creators used 1970s and 1980s technology to create some of the most memorable scenes in sci-fi is always a treat. What other Star Wars filming tricks and fun facts do you know?