There’s been something of a low-level trash-talk phenom going on around here regarding who amongst a small, insignificant group of us is the best at hand soldering. But that’s all it ever was, and we were prepared to let sleeping dogs lie...until Drew Fustini stoked the fires by independently giving a few of us SMD Challenge kits from Makersbox. Eyes started getting shifty at each other, conversations gradually turned to drawing lines in the sand, and with an ultimate “arright, that’s it!” the date was set. On December 6, 2017, a date that will live just one day prior to another date that will live in infamy, four people stepped up to see how they measured up.

In spite of that, I’m thinking I’ve got the inside track going into this because I’ve got so many years of tech experience behind me. In fact, the only “real” competition is probably going to come from Mary, who also has a bunch of tech experience. She wears glasses, so her eyes might be worse than mine. But she’s also a bunch younger, so her hands might not shake as much.

Nick and Shawn? Whatever. You guys are going to feel some pain.

At the start of the competition, my hands are predictably shaky and sweaty. But I blast my way through this thing, swapping the positions of the 0805 resistor and LED. The polarity on the LED is still right, so it still lights. But I’ve got the parts swapped, and that’s probably illegal. Ah, well.

By about 23 minutes into it, I’ve got all but the 0201 parts on the board, and everything thus far is functional. Some observer pipes up, “Looks like Dokter’s ahead,” so I’m thinking I’m about to bring this thing home. Until... 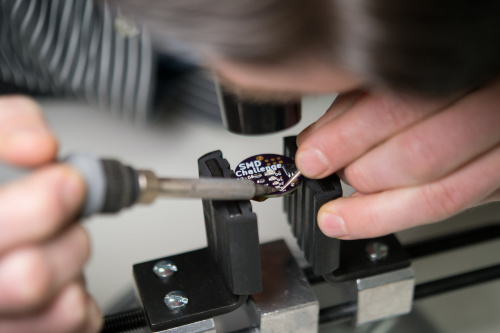 Within the next 15 seconds, I manage to lose both of my 0201 LEDs. We were working on a white table, and those little suckers are white like a grain of salt. And they’re just gone. I run my hand over the table top looking for junk stuck to it, but it’s no use. At just over 24 minutes, I call done. Or as done as I’m going to get.

A minute and a half later, Mary makes the same call. Parts gone, this is as done as she's going to get. 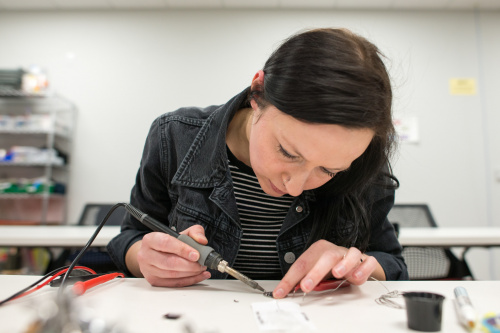 At this point, I’m expecting to hear the same from Shawn and/or Nick, but that was not to be the case. These guys haven’t lost parts, and they’re still trying to pin those 0201s. Wow, kudos to you guys!

At right around 46 minutes, Shawn announces that he’s got his 0201 functioning. It’s all over! 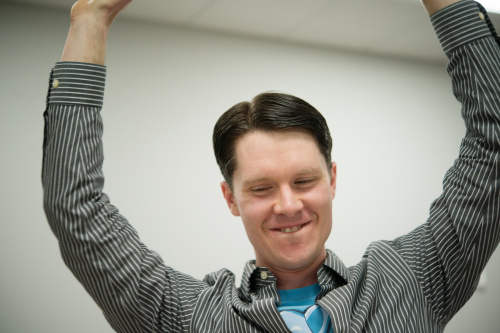 Here are some thoughts from the other competitors:

“It was weird but a nice break from my desk of circuit design and analysis. Of course Shawn won --- he took an extra 25 minutes and hacked the board to make it work. So I guess he won extra hard???” --- Mary

“BLASTED DIODES! I had this one in the bag but I was betrayed by my own pride when I refused to look up the polarity of the LED markings. Hand soldering 0201? Totally possible. Hot air 0201 rework? Tall order. Too tall for me. I think I would smash this challenge if it included some tight-pitch TQFP devices...love to drag solder.” --- Nick

“The 25 extra minutes to solder an 0201 was TOTALLY WORTH IT. Testing polarity and even picking up the component were lessons in frustration. Because the component body of the 0201 LED completely covered the pads, my trick was to scrape away some of the solder mask so I could rest the iron's tip on the traces to transfer enough heat to reflow the solder. Not exactly a robust soldering technique, but it worked.” --- Shawn

Shawn cheated!!! Nah, not really. In fact, I’m disappointed in myself for not doing that, as I have done such before when repairing burned traces or just rerouting signals (yep, I sure have burned some traces). But I never actually got to that point since I was apparently so eager to get rid of my 0201s. You win this round, Shawn.

Thanks Shawn, Mary and Nick for being brave enough to do this at all, let alone live. That was a little nerve-racking. But more importantly, thanks to Drew Fustini for proving the kits and the motivation. Lastly, a shout-out to our production crew. We four might have been the faces in this competition, but we all know who the real masters of hand soldering are in this place.

New to soldering? Want to hone your skills and become a master? Check out our array of tutorials, tools and beginning soldering kits.

Enginursday: Using a Motor Driver as a Class D Amplifier