Kids love Minecraft and things that glow in the dark - here's a fun project to get your littles involved with electronics!

It is widely acknowledged that children love Minecraft. They also tend to love things that glow. So why not combine these into a super-mega-happy-awesome project? Behold, the Enderman head: 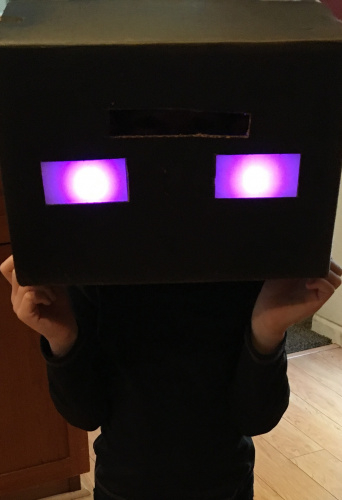 Spawned from an overabundance of cardboard boxes, a few extraneous Pixel Boards, and some spray paint and fancy sewing, we now have a glowy-eyed Enderman head that brings all the neighborhood kids to the yard.

To make this project, I used the following:

These are very slim, extremely light weight batteries based on Lithium Ion chemistry. Each cell outputs a nominal 3.7V at 850…

This is 12 meters of smooth conductive thread spun from stainless steel fiber and wound on a plastic bobbin. Use it to sew up…

We know you love adding color to your e-textiles, adding the LilyPad Pixel Board to your project will only make it better. Th…

The LilyPad line has some pretty amazing documentation - I followed the LilyPad Pixel Board Hookup Guide to get my board and pixel boards all hooked up. There's also a wishlist in this hookup guide that has pretty much everything you need!

If you've never worked with e-textiles or the LilyPad line, I recommend starting here:

Getting Started With LilyPad

In addition to the hookup guide wishlist, you will also need the following:

For the box, we glued the top flaps shut for the painting and left the bottom open for ease of assembly. Once we were all painted up, we cut an appropriately sized hole out of the bottom for the head to fit through. We also measured about halfway down the box and cut holes for the acrylic eye plates. Keep in mind that you will need to cut another hole above these eye plates so your kiddo can see out of the box. Also - don't mount those acrylic plates yet! 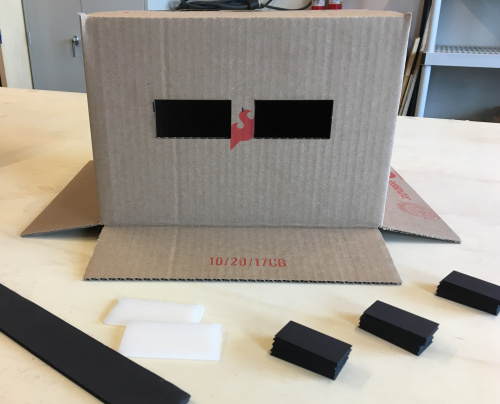 Now for the fun stuff! The Pixel Boards, Arduino and LiPo battery are all mounted on a foam board strip inside the box head.

I cut the foam board strip a little longer than the box width to help with mounting. I centered it on the box and folded the ends back as flaps. Once it was folded and in place, I marked where I wanted the glowing eyes from the front of the box.

Once I knew where the Pixel Board eyes would go, I set about sewing the Pixel Boards as well as the Arduino to the foam board strip. I mounted the Arduino controller on the backside of the strip so that the lithium battery could also be mounted on the back of the strip. This makes for easy access to the on/off switch and for battery charging. Again, refer back to the tutorials listed above if you have never worked with conductive thread. 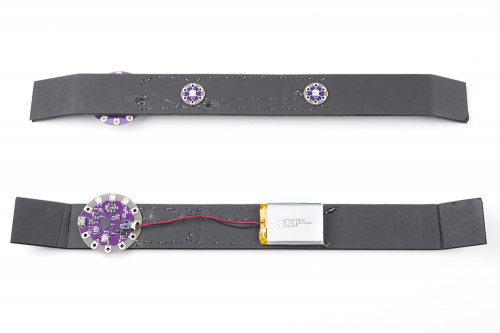 After verifying that the circuits were working and my Pixel Boards glowed a beautiful purple color, it was time to mount everything!

Start with the acrylic plates. I just used clear tape on the inside of the box to affix these guys into place. I also used spacers - three sets of them - to offset and stabilize the foam strip carrying the Pixel Boards. I used the same foam board (four thick) and my trusty glue gun to fix these into place. I then glued the Pixel Board flaps into place and switched it on. 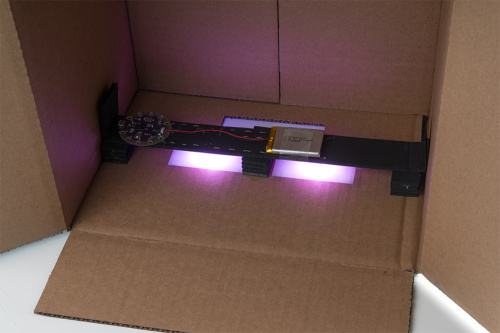 We had a great time making this project and it was a great way to get a kiddo involved and learning about circuits! What projects have you made with LilyPad? Let us know in the comments!

Getting started with Arduino cryptography