Next Fall's AVC is starting to take shape. We've seen the future, and the future is... GOATS!

So, hey! It’s getting to be that time of year again – time to start planning your pilgrimage to Colorado to hang with us and other like-minded tech nerds for the 10th annual SparkFun AVC! Yep, 10 years have passed since starting this shindig, and it continues to be one of our most anticipated events, inside the building as well as out. Today we’re going to post the rules for SparkFun AVC 2018 (subject to some amount of tweaking between now and the event), and I’ll spend a little time here to tell you where we’re at with all of this. 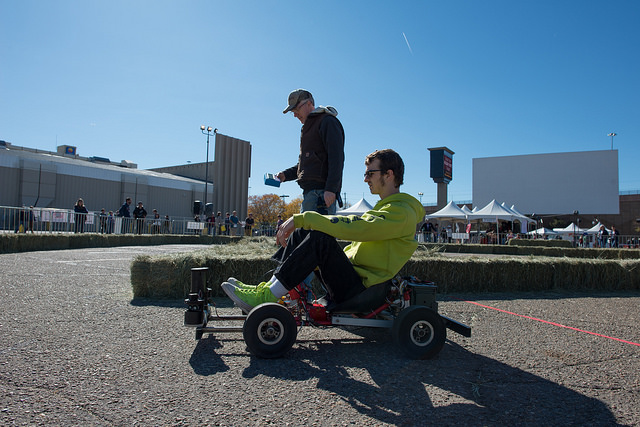 At SparkFun, you don’t drive car, car drives you!

To piggyback on some of what Megan said in her blog post last week, this year the event happens 9/7-9/9/18, and it’s at the Boulder County Fairgrounds. Like last year, there will be two pieces to the event: Combat Bots and Classic AVC. And each of those have subcategories: weight classes for Combat Bots, Speed Demons and Autonomous Car Wars for Classic AVC. So, same sort of thing as last year… except we’re (almost certainly) not running Logistics Class within the scope of Classic AVC. What?? No Logistics Class? Well… while we think the competition has merit, we only had one competitor last year. It was a hard task to be sure, but one competitor doesn’t make for much competition, does it? That said, it’s not yet completely off the table. If you’ve got an interest in running Logistics, drop us a note at avc@sparkfun.com, or post a comment here, and we’ll make the final call in the near future.

The track for Classic AVC is going to be a figure-eight with the same dimensions as last year. Why? Because it was hard, and that sorta surprised us. We don’t like to keep doing the same old easy stuff; we want to be continually challenging your abilities with this competition. But clearly, mastery of the figure-eight has not been achieved. It’s also going to be on hard-packed dirt, and there are a few scattered rocks (like small gravel), so plan your chassis accordingly. Will rain be an issue? Well, we walked the track on a wet day, and it looked passable to us.

Most of the obstacles for Speed Demons will remain the same, with the exception of the James T. Kirk slow-moving pedestrian. Jim was just too high-maintenance, so he’s being retired, but we will almost certainly add another obstacle or two that will test your abilities. More on that in the future.

Autonomous Car Wars will be largely the same, with the exception of a rule change with regard to the cup of coffee you’re supposed to be holding. If the cup isn’t in your hand throughout the race, you’re going to get docked points at the end. Georgia Tech, I’m looking at you! (Actually, good on you for the loophole, but we'll just tidy that up for ya.) 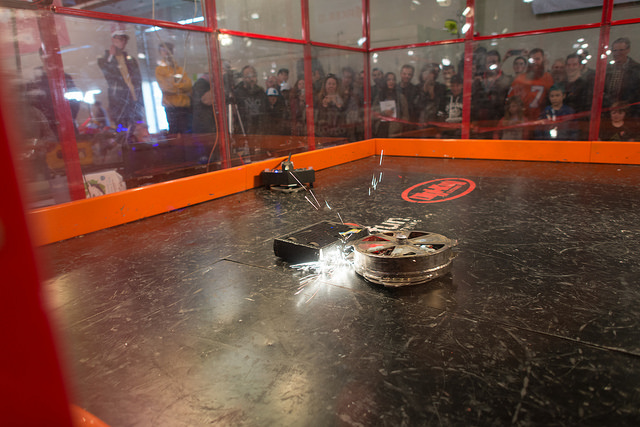 Everyone comes just to see a robot die...

For Combat Bots, you get to be inside a building! So at least you’ve got that going for you, which is nice. But you know that thing Megan said about goats? Yeah, that was true. I mean, they’re not going to be running around inside the building with you. But if you start hearing comedic banjo music, keep a sharp eye for the goats. For more info on the current Combat Bots rules, Here's a message from our Master of Ceremonies, Casey Kuhns:

Roboteers! Get ready to register!

We will be using a subset of the www.Sparc.tools ruleset. We have included our selection of the rules to hopefully make things a little simpler to follow. This year we are making some additions, along with some changes.

Starting with the Plastic Ant weights (1 Lb), we are making this exclusively K-12. This is a great weight class to get started building robots. Using 3D-printed materials to create the body and weapons lets teams build robots with tools they might find in their schools and libraries. K-12 teams are welcome to enter other divisions but we will be focusing special awards on the Plastic Ants.

1, 3, 12, and 30-lb bots are going to run the same as last year. If you have one, great! If not, start building after you take a look at the rules. I know one of the burning questions this year is if we will have flame throwers. To that I say, yes…for now. If you plan on building one, please reach out to us. We will need to qualify each flame thrower individually, and I have some extra safety steps we need to take. We had a great showing last year and I hope we can grow the event.

NEW DIVISION! Woot! The community reached out to us and we listened! We are going to add 60-lb non-spinners this year. What does that mean? Well, I would love to bring on the full combat, but I’m not sure the arena can contain the chaos just yet. Any robot that doesn’t spin a large mass continuously is good to go. If you have been wanting to build a bigger bot and you miss the days of Golden Eye 007 “Slappers,” this will be the competition for you. Let’s see your hammers, flippers, grabbers, lifters and ok, wedges. Any robot designed to slap will forever win my respect and the best slapper will get an additional prize from my box of misfit robot parts.

We are also going to change how the event is run this year. The livestream has been a hit year after year, so we are going to adjust the event schedule so our fans near and far can tune in and follow along. To support the livestream we are asking teams to check in and complete tech inspection on Friday. I’ll be there all night if I need to; we want to collect some interviews and get footage of your robots in action. This event is going to be just as much about competing as it is sharing what you have built with our viewers.

As I mentioned, it’s all going down 9/7-9/9. As for the specific timing of the events, we’re still working out the details. The way it’s shaping up right now is that 9/7 is going to be a set up and practice day for both combat bots and AVC vehicles. Combat bots will run both 9/8 and 9/9. Classic AVC may just run on 9/8, depending on whether we end up doing Logistics.

Last, as this is the 10th year of AVC, we want to reaffirm this event as one where the focus for us is on the competitors, not the crowd. No silly distractions, just bots from dawn ‘til dusk. We’ll have the competitor party, of course, plus some other surprises. Stay tuned for more details, and check out the AVC page for current rules!