Guest author Kelly Small shares his experience with the evolution of test controllers from the 1980s through today.

Pete Lewis here! This blog was written by a guest author, Kelly Small. We really appreciate his contributions to our community, and are very excited to help spread his extensive knowledge here on our homepage. The conversation about testbed design has been a great one, and if you'd like to read more about SparkFun's own testbed design history, please check out our previous posts here:

And now, onto the amazing story that covers more than thirty years of testbed progression in Kelly's career. Enjoy!

Working as a test engineer for many decades, I have seen remarkable changes and advancements in the field of electronics. My job is to develop test systems that our factories use to verify our products are built correctly and function as expected. These products include everything from a simple cable to a complex module composed of multiple PCB’s with as many as 16 layers. The circuitry can consist of multiple processors, FPGAs and complex analog systems.

To test our products, which we refer to as UUT’s (Unit Under Test), our test flow consists of several steps. The first test step is in-circuit testing (ICT), where all the UUT’s are tested with a fixture that presses pogo pins into test points on the board, and makes test measurements of all the components on the board. This type of testing can weed out a lot of possible problems with the UUT, such as solder bridges and open runs, as well as wrong parts, missing parts or bad parts.

The next step is programming stations that program unique information into each UUT, such as serial numbers and MAC addresses. Next are the functional testers, which vary somewhat with the product, from a simple bench test to environmental tests, which use a chamber to rapidly heat and chill the UUTs while electrically testing its functions.

While the ICT testers are commercial systems that are purchased and installed at the factories, most of our other test systems are designed, programmed and built within our test engineering group. The heart of these various testers is what we refer to as a test controller. The test controller is a standalone embedded platform that controls power, input stimulus, output measurements and communication with the UUTs being tested.

Around 1985, we developed the first test controller to support functional testing of a new product line, which included I/O modules of various types. These included Digital Inputs, Digital Outputs, Analog In, Analog Out and others. Modern test systems would most likely be comprised of a PC with a host of data collection modules, but in 1985 very few PCs existed. Those that were in use were 8-bit XT systems with very little in the way of hardware and software for test purposes. We selected the Intel 8051 microcontroller for the brains of our test controller, which has very few peripherals on board. The rest of the kernel consisted of a 32KB SRAM and a 32KB EEPROM. This EEPROM is where the code was stored, typically a 27C256. This chip was programmed one time and then you had to use a UV eraser to erase the chip before you could program it again. This erase process took 20-30 minutes, so you wanted a tube of chips on hand to make constant code changes during a debug session. The rest of the electronics were a group of I/Os used for connection to the UUTs being tested.

This group of I/Os is referred to as the common electronics; the intent was to use it as a starting point for each test design and add additional circuitry (point logic) as needed.

The test controller was built on a 9”x11” PCB, with a pair of 96-pin DIN connectors at one end. 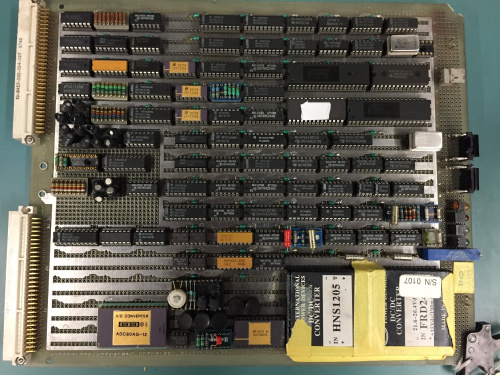 From 1986, the first test controller (top side view)

This first test controller, shown above, had an 8051 kernel and no programmable logic! 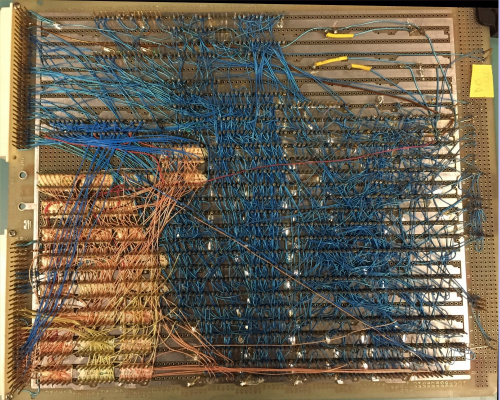 From 1986, the first test controller (bottom side view)

As you can see in the picture above, all of the connections were made with 100 percent wire-wrap.

Around 1987, we created a new PCB that had all the common electronics in a copper artwork section, while the rest of the board was laid out to support wire-wrapping of .3” DIP sockets for the point logic. This reduced the amount of wire-wrapping by a considerable amount. 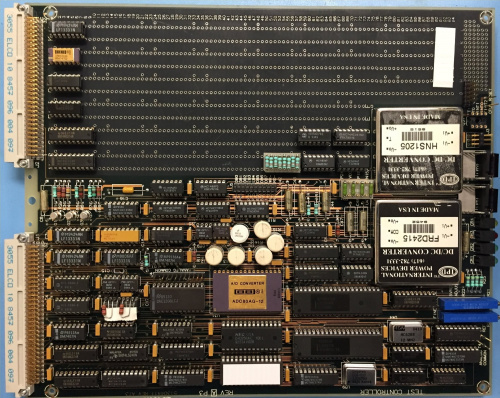 From 1988, the test controller with "copper artwork section" (top side view) 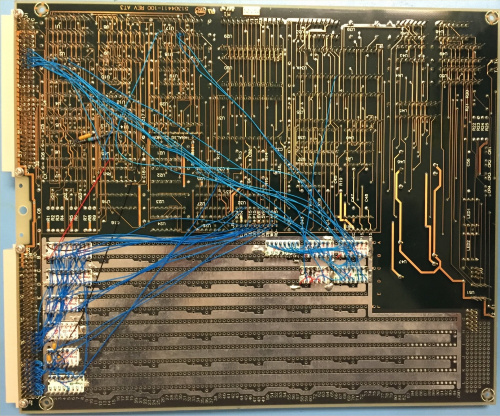 From 1988, the test controller with "copper artwork section" (bottom side view)

This 1988 design served us well, and we still have fixtures today using these test controllers. One of the benefits of this setup is that we’re immune to all the changes in PCs over the years, including the introduction of Windows. We continued to use our DOS software until around 2012, when a Windows version was finally introduced.

In 1996, a new product was introduced, so we took the opportunity to make a new test controller design. We switched to an 80C251 processor (16-bit), and other features included an analog section that was self-calibrating, and the introduction of a pair of CPLDs. These CPLDs were used for some of the common logic, but were mainly intended for use in building the point logic with software, rather than a mass of wire-wrapping. 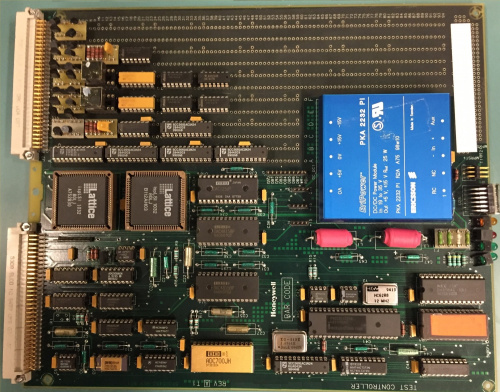 From 1996, the test controller with CPLDs to further reduce wire wrapping (top side view)

Technology marched on, and in 2004 we were once again looking at a new product to test, and so went after a new test controller as well. The 82C251 never caught on, and there were better 8051 variants available. We went with a P89C51RD2, which had SRAM, FLASH and EEPROM on board. Running at 24MHZ and six clock cycle instructions instead of the original 12, we also saw some decent speed improvements. The RS-485 links were bumped to 750K to support faster speeds that the newer product was using. It was getting difficult to find through-hole logic, so some of the common area were now surface mount. We continued to use socketed parts for the buffered signals going to and from the product being tested, which allowed for easy repair at the factory. If damage occurred to the SMT common electronics, field repair was difficult to do, and the test controller was typically sent back to our facility for repair. 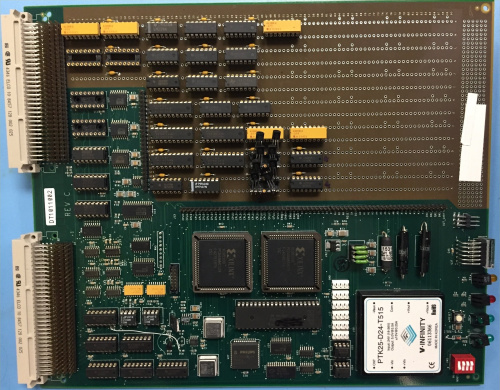 From 2004, the test controller with many advancement including more SMD parts (top side view) 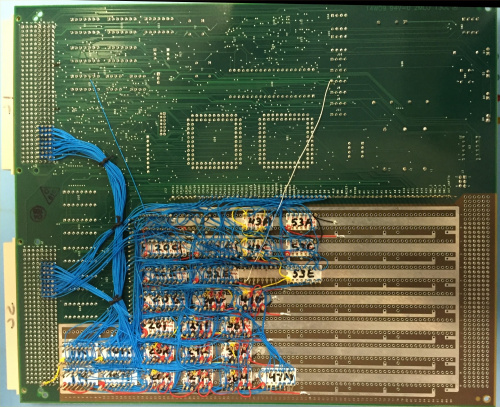 In 2012 I started using PCB-based daughter boards for the point logic. This reduced the wire-wrapping to very little, if any. 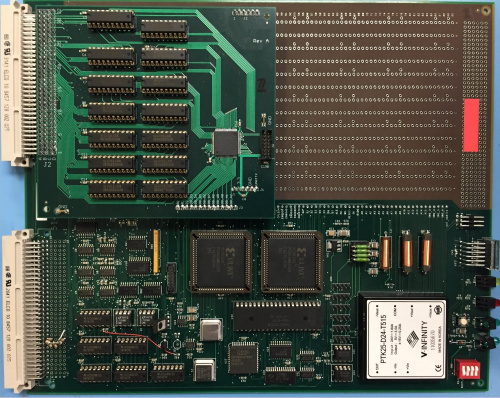 From 2012, the test controller with daughter boards (top side view)

My most recent design was driven by parts obsolescence. The 8051 variants were disappearing, as well as supported development tools. The CPLDs were end of life (EOL), so it was time for a new design. I selected the Atmel ATMega1281 and the Xilinx XC95144XL, one of the few remaining CPLDs that was 5-volt tolerant. Except for buffered outputs, all of the common electronics are surface mount. A second processor (ATTiny1634) is used for communication, either the 375/750K RS-485 or other protocols. The layout is designed to support daughter board add-ons, but you can still use the wire-wrap area, with selectable 3.3V or 5V power. 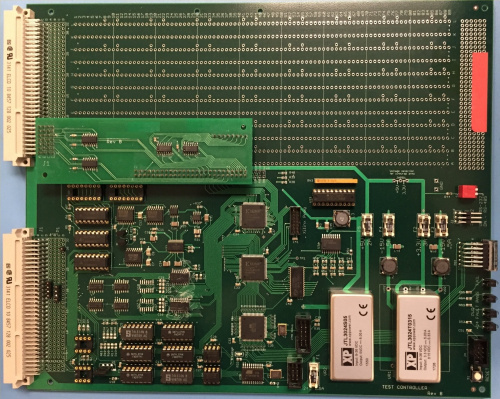 From 2016, the test controller with nearly 100 percent SMD parts and no wire wrap connections (top side view)

What do I see for the future? Our electronics world is governed by supply and demand – these days that means smartphones. Most of our IC vendors are dropping 5-volt and 3.3-volt parts in favor of 1.8 or lower voltages. Large capacitors and other parts are becoming less common as well. Our next generation test controller will probably move to an ARM-based processor, and the CPLDs will be replaced with FPGAs.

Kelly Small is a principle test engineer with a Honeywell division in Phoenix, AZ. He’s been employed there for over 40 years, with 38 years in test engineering. Kelly has also been a participant in SparkFun's Autonomous Vehicle Competition, and his high-tech treasure chest was featured on our blog.

We greatly value not only Kelly's participation in our events, but also his involvement in the open source community. Please feel free to ask any questions below in the comments section, and thanks for reading!