What good is a controller without a gaming console? What good is a a cold drink without snacks? What falls out of my brain when left unsupervised?

If you were keeping an eye on E3 last week - that’s the Electronic Entertainment Expo, one of the premiere events for the video gaming industry - then you know Miller Lite introduced the Cantroller™, a beer can, full of beer, that is also a Bluetooth gaming controller. Of course, you couldn’t buy one of these. But you could win one of the two hundred that Miller Lite was giving away, simply by beating comedian Eric Andre in a game of Street Fighter. And naturally, you would both be playing using the Cantroller. It was a great way for Miller Lite to get noticed at this year’s E3. They even released a heavy-on-visuals/light-on-copy commercial before the event, which you should definitely watch. 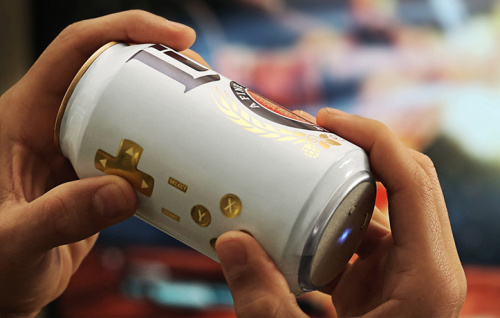 This is the type of project I can wholeheartedly support. It’s ridiculous, kitchy and fully functional, and there was really no reason for it to exist other than because a bunch of people were sitting around in a meeting, and one said, probably in a Beavis-sounding voice, "Hey, you know what would be cool? If we made, like, a beer can, but it was also a game controller. Heh heh."

We’re no strangers to wireless controllers here at SparkFun - we’ve had the Sparkfun Wireless Joystick Kit for quite a while now. Nor are we strangers to hacking game controllers, so seeing Miller Lite’s controller immediately brought two things to the front of my mind: first, why didn’t I think of this, and second, what could I do that would be similar or complementary to this project? 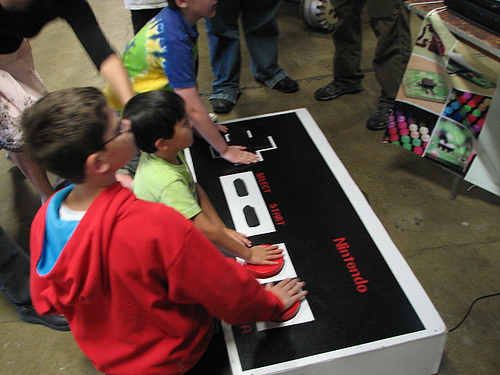 Creating a solution where there is no problem

Instead of looking for what’s needed, I decided to look for what was ridiculous. If you were lucky enough to win one of the Cantrollers, it’s a pretty good bet that you have several gaming consoles. I looked for obvious pairings – game controllers pair with gaming consoles, and cold beer pairs with tasty snacks. From this was born…

I figured the gaming console would be fairly easy. I used a Raspberry Pi 3 B+, along with the Raspberry Pi 7” LCD Touchscreen, a Hamburger Mini Speaker, and one of our now-retired 5Ah Lithium Ion Battery Packs. I loaded up RetroPie, and Emulation Station, the video game emulator. The RaspberryPi 3 B+ seemed the perfect choice, since it has built-in Bluetooth, and would therefore be compatible with the Miller Lite Cantroller. You can learn how to set up your own RetroPie system here.

For reasons I cannot explain, my brain just kept yelling “Pizza rolls! Pizza rolls!” I found that the big box of Totino’s Pizza Rolls looked to be about the perfect size. I knew I would have to make some kind of insert for the Totino’s box so that it had a little structural stability. I also wanted to give it two sections: the bottom would house all of the electronics, while the top section would hold pizza rolls.

With access to a laser cutter here at SparkFun, I used MakerCase to create a finger-jointed box that I could cut out of quarter-inch and eighth-inch acrylic. I made a few adjustments to allow for the screen opening, a hole for the wired controller, some venting to keep the system cool and to let a little sound out, and the separator to keep the pizza rolls out of the electronics. I carefully opened the Totino’s box from the bottom, so I could open the factory sealed top in the video. I test fit the acrylic box, and it was just a little too large - my tolerances were too tight - a reduction in the outside dimensions by two percent, and it was a perfect fit. 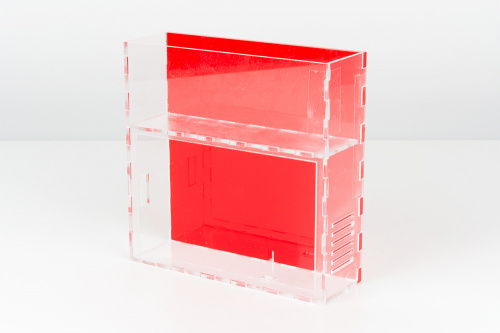 It couldn’t be that easy

Having created the insert to house the electronics (and some pizza rolls), I put in the speaker, battery, Raspberry Pi and touchscreen. They all fit beautifully. Then I attempted to slide it all into the pizza roll box. That’s when I learned that the glass of the touchscreen was about 3mm too wide for the box. 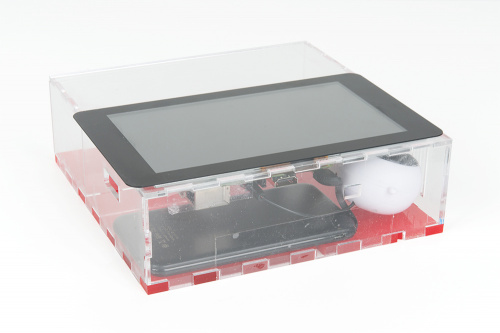 Well look at that, the components fit, but the screen glass IS wider than the containment box!

I struggled, forced and pleaded, but it looked like there was no way it would all fit in without tearing the box edges. So I took my hobby knife and carefully opened the box on its seam. I was then able to slide the entire assembly in, then hot glue the box back together as tightly as it would fit. I also made a hole in the side of the box where the Raspberry Pi’s USB ports sit, so I could insert the wired controller once the assembly was sealed inside the box. Of course, this wouldn’t be necessary with a wireless controller. 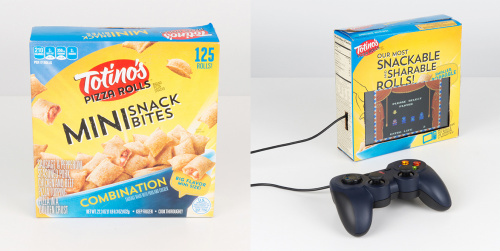 Thinking of building your own? Here are some thoughts

Since this was basically just a fast and fun build, designed for a quick fake commercial, there were definitely some shortcuts taken. The biggest, of course, is that the entire system needs to be powered up, then hermetically sealed inside the pizza roll box. To power it down, you either have to tear the box open again, or just play until the battery drains completely.

Ah yes, the battery. This setup could be quite a drain on a single cell LiPo battery. Knowing I would not be using a wireless controller, and not knowing how long the shoot would take, I swapped out the Raspberry Pi 3 B+ for an older Pi 2 that I had sitting around. Since this board lacks Wifi and Bluetooth, I knew it would draw less current, and therefore last longer. With the now-retired 5Ah battery pack, it was still running strong after four and a half hours.

Ideally, a finished product would have, hidden on the bottom of the box, a way to turn the system on/off, a way to turn the speaker on/off (or just use a speaker that could be powered from the Raspberry Pi), and a USB port to charge the battery. The immediate issue that comes to mind there, however, is that single cell LiPo chargers that also allow for output have a current limit of about 1A - not enough to run a system like this. But hey, that’s future me’s problem, and something I’ll worry about if the good people at Miller Lite find it in their hearts to send me a Cantroller™ to go with my Pizza Roll Console™!