Measure the ambient temperature of the room with either the TMP117 or TMP102!

Is it cold in the room or is it just me? That's the question that came up a few times when I was working in the building. I thought to myself, what is the current temperature? I dug into my storage box of parts to quickly build a thermometer. After testing a few temperature sensors, I finally decided on using the TMP117.

Note: If you haven't read the previous blog post, feel free to check it out below!

Reading the output on the computer was great, but I usually have several windows and tabs open. Rather than have another window clutter my screen, I wanted to have the output on a separate display. There are several options available in the catalog. I decided to take advantage of the small Qwiic 1.0"x1.0" size and opted for the Qwiic micro OLED. Instead of using the RedBoard Qwiic, I decided to go small as well with the Qwiic Micro.

With some standoffs and Qwiic cables, I built up my Qwiic tower of sensing power! Coding was a breeze by looking at the examples for the TMP117, TMP102 and microOLED. One piece of code that I also added and thought was useful was a progress bar from SparkFun Inventor's Kit for Photon (thanks Jim!). I wanted the option to scroll through different views (degrees Celsius, Fahrenheit, or both temperatures at the same time) so that I knew when to expect the next view. However, if that's not your cup of tea, there is an option to just display one view depending on your personal preference. 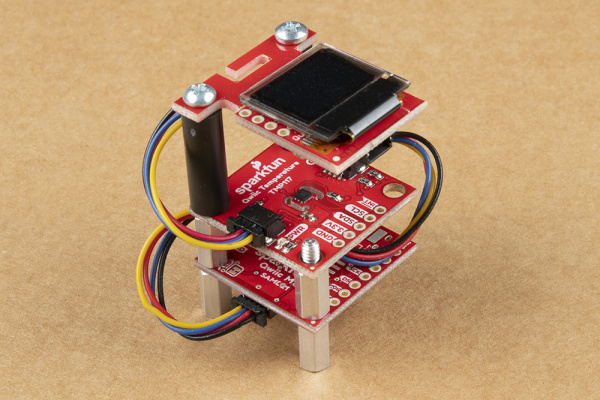 So if you are looking to measure the ambient temperature of the room with either the TMP117 or TMP102, check out the tutorial below!

Qwiic-ly build a digital indoor thermometer to measure the ambient temperature of the room and display it using an OLED on an I2C bus!
Favorited Favorite 8

Well that was some "Qwiic" fun. Onto the next project!