Last week we released a great little haptic driver from Dialog Semiconductors. This week I show you how fast and simple it is to build into a potentially job-saving project.

If you were a cutting edge technophile in the 80s, a drug dealer in the 90s, or a medical professional or first responder even today, chances are good that you had or have a pager, which would vibrate when you were called. If you are hearing impaired, then you’ve probably had a haptic alarm clock for decades. And if you don’t want to be “that person” in any quiet or somber gathering, then you have your phone set on vibrate (and thank you for that). However, thanks to our release with Dialog Semiconductors of our new Haptic Driver and Haptic Driver Kit, anyone can add haptic feedback to anything with just a few lines of code and a little creativity.

To demonstrate just how fast and simple it is to get up and running with the Haptic Driver, I’ve paired it with another of our recent product releases - the KX132 triple axis accelerometer. Here are the results.

The code took me all of about three minutes, as I simply combined the most basic examples from both our Haptic Driver and KX13x libraries - sort of “a little from column A, a little from column B.” One thing that the Haptic Driver is capable of, but that I didn’t demonstrate, is its ability to change the frequency or pitch of the vibration motor using PWM. Great stuff.

If you watched the video all the way through to the end, then you also know that we’re holding a little contest. The disturbingly creepy head that I used to explain my project (the Haptic Heads-Up) needs a name, and we want you to name it. Think you have a name fit for a… well… um, that thing? Let us know in the comments below by next Thursday, May 13. We’ll be choosing a name for the SparkFun head, and the winner will get not only the satisfaction of hearing us call the head by the name they gave it, but also, the winner will get each of the three components I used in the build, plus some Qwiic cables to hook it all up. That’s right, bragging rights and FREE SPARKFUN STUFF! So get creative, and let that creativity pay off! 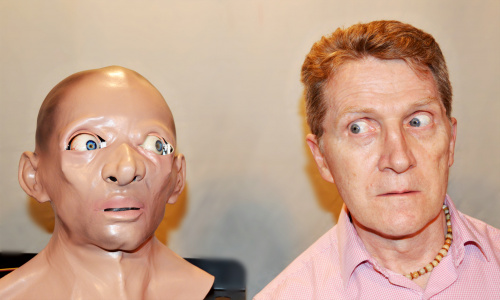 Rob and a friend to be named later (possibly by you!)
View Comments (69)
Share
Use this URL to share: