Checkout the inner workings of ransoming and patent trolls.

Any long-time SparkFun reader may know that we really enjoy writing about the whacking legal entanglements we've experienced, whether it’s cease-and-desist letters from Sparc International, tossing out 4,000 DMMs, or dealing with counterfeit ICs. Unfortunately, now it’s time we talk about patent trolls.

Since a few of my international friends looked at me funny when I mentioned it, a patent troll is a company that is specifically set up to purchase the rights to a handful of patents and then sue anyone they feel they can get money from.

Patent trolls are Americans that are destroying American manufacturing and small business. I've got heaps of challenges when it comes to SparkFun, but patent trolls are what keep me up at night. SparkFun knows how to manufacture in America, and we've created tons of new open source products, but patent trolls can come out of nowhere and do real harm. It's legalized extortion. There’s a few forms of this so let’s first talk about ransoming. SparkFun has received a few of these over the years. Let’s have a look at a passive one from Feinberg Day: 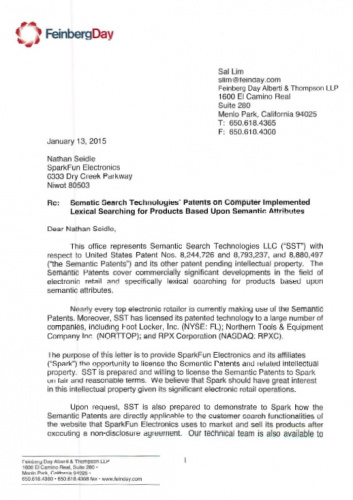 Sal is basically saying, "Hey there. We noticed you have a website. We have patents that deal with websites. We’ve managed to (supposedly) shake-down Foot Locker and Northern Tool. You should probably call us to discuss this.”

It’s sort of like scam phone calls. If you answer your phone at all, they know there’s a human there and your phone number is now more valuable to other scammers. If you actually call Sal, they’ll know you’re paying attention and worried. We're not an attorney but we found the best solution to this type of troll is to ignore it. 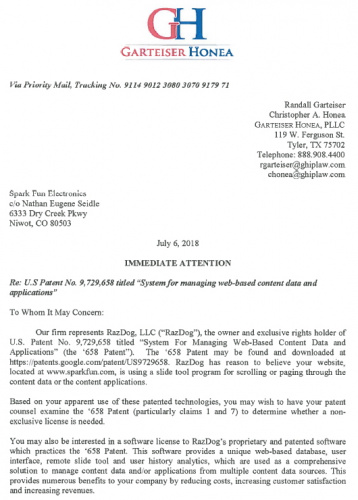 Say it with me: RazDog!

RazDog takes it up a notch. Sorry, but I just can’t take RazDog seriously. Just saying "RazDog" makes me giggle. But in this type of patent ransoming they put in a ticking clock. If you respond in two weeks it’s $49,284. If you delay it’s $54,284, so you’d better call now! Again, we're not an attorney but we found the best solution is to ignore it.

If you ever find yourself down the rabbit hole of patent trolls you will likely never find the bottom. Gag orders are used thoroughly by trolls to prevent anyone from talking about settlements. So if you never hear from us again you'll know it's because we had to adhere to a gag order. 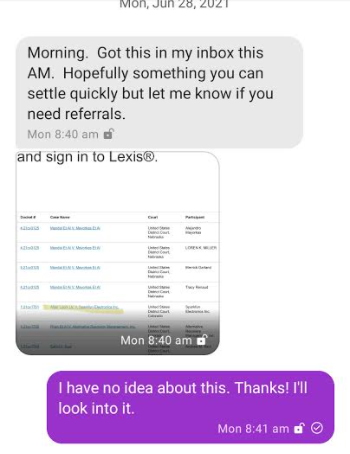 Not what you want to read on a Monday morning

Which brings us to Monday morning. My good friend, who happens to be a powerhouse of a trademark attorney, sent me the above text message. She is super nice and I think has some alerts for SparkFun in place so she can keep an eye out for me. She was letting me know we were being sued by someone called Altair Logix. More on them in a minute but I’d like to point out that:

So imagine you’re a small business that designs and manufactures stuff, and you start being told you’re being sued. You’ve got to focus on building things, keeping the lights on, and keeping people employed. It’s terrifying. In fact, I’m still paranoid about even writing this blog post. We’re really poking a stick at Feinberg, RazDog and Altair Logix here. These firms could potentially bring a tremendous amount of pain against SparkFun. But we think it's far more important to pull back the curtain on questionable and unethical business practices. Let’s return to Altair Logix.

Altair Logix is located in Frisco, Texas. Texas and patent trolls immediately remind me of the excellent This American Life episode “When Patents Attack.” It’s a great listen and goes far more in depth on the overall patent troll issue. This entity I'm now calling Al doesn’t seem to build anything. They don’t really do R&D. I’m hard pressed to even locate a website or contact information for Al. But Al does seem to enjoy suing people: Texas Instruments, Coolpad Technologies, VIA Technologies, Renesas, ASUS, Caterpillar, Nuvision International, Netgear, Lynx Innovation, … oh my! Let’s add SparkFun to that list of people being sued. 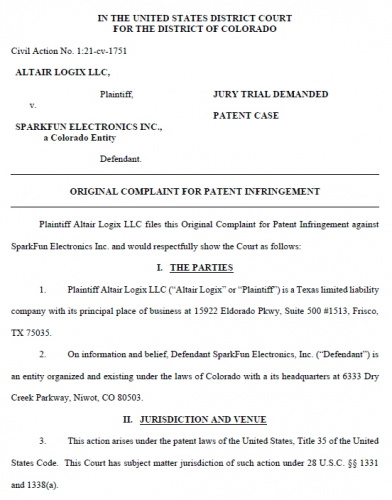 Al is claiming that they have patent number 6289434 which they quickly start referring to as patent ‘434. Can I tell you how humorous it is that an attorney feels it necessary to shorten a 7-digit number to a 4-character abbreviation? Thanks Al. That really saves me some time. 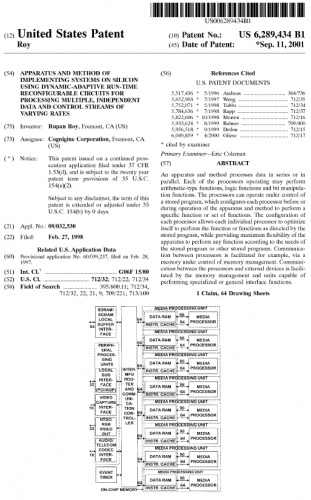 Patent 6289434 was written in 1998 and granted in 2001. I’ll start by pointing out that patents are valid for 20 years from the date on which the application for the patent was filed, so 2018, but I’m no patent attorney. You are welcome to read all 93 pages of it, but it’s laughable. I don’t know the original authors Rupan Roy or the Cognigine Corporation; perhaps they thought that a "Media Processing Unit" was really novel in 1998. Today, it’s not. 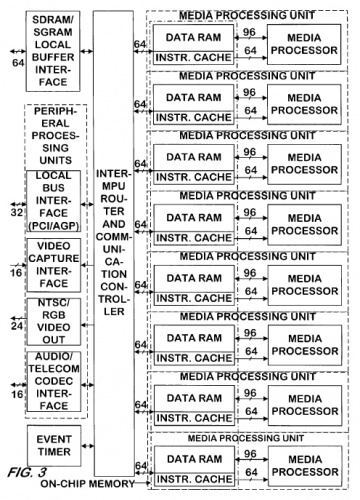 There’s lots of official looking diagrams in this patent. If you ignore the fancy "media processor" jargon, the image above shows a multi-core processor. These are not telling or descriptive or even helpful diagrams; they are fluff. 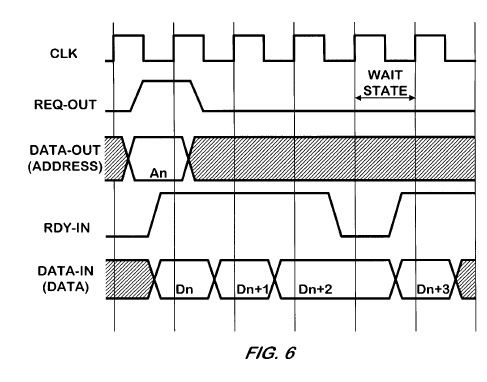 An SPI Interaction made to look official

Oh look! It’s a diagram of an SPI interaction with interrupts! (If this doesn’t make sense to you, just know that SPI transfers move data between your SD card and anything that uses an SD card - they are omnipresent). 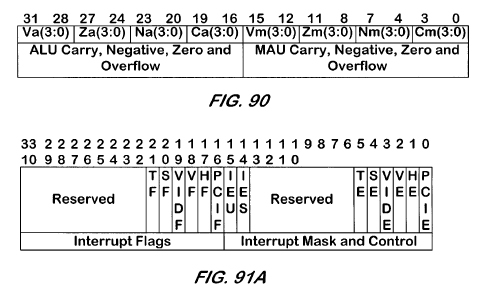 There is no such thing as a MAU

The goal of patent 6289434 is to take something the embedded systems industry is built on (in this case ALUs or Arithmetic Logic Unit) and change the terminology so that it’s “new.” In the above image the ALU that we use all the time is coupled with something called a MAU, which I don’t even have the time to decrypt the meaning of. It’s bullshit. MAUs don’t exist. The mixup of jargon is meant to be thick and confusing so that people who have less technical experience get worried. Why hire lots of expensive lawyers and field experts to fight when I could just settle and get back to building things? Because that only makes more little trolls.

Let’s move on to the lawsuit. The fun starts around page 6. Al claims:

The cost is further reduced by employing only static or dynamic ram as a means for holding the state of the system. This invention provides a way for effectively adapting the configuration of the circuit to varying input data and processing requirements. (Id. at col. 3:6-8). All of this reconfiguration can take place dynamically in run-time without any degradation of performance over fixed-function implementations. (Id. at col. 3:8-11).

Dynamic ram? Can I poke fun at them for not knowing what RAM is? Yes I can.

The above paragraph succinctly describes malloc(), which is perhaps one of the most fundamental advancements in modern computing. The problem is that Al didn’t invent it. Memory management (the ability to take RAM and then give it back when your function is done) goes back to the dawn of computing. The use of malloc() and carefully tending to your RAM is pervasive in embedded systems. I literally just wrote a routine this morning for the ESP32 that throttles Bluetooth traffic because my heap was running out of space. They got a patent on memory allocation? Yeah. Sure they did.

The present invention is therefore an apparatus for adaptively dynamically reconfiguring groups of computations and storage elements in run-time to process multiple separate streams of data and control at varying rates. (Id. at col. 3:14-18). The ‘434 patent refers to the aggregate of the dynamically reconfigurable computational and storage elements as a “media processing unit.”

Once you get over the words that have obviously not been written by an embedded engineer, the lawsuit is describing variable length arrays. You can slap your “media processing unit” sticker all over it, but it’s just a malloc() call.

Wait wait wait. You’re suing us over the pcDuino from 2016? We stopped selling that board in 2017. It was a neat little single board computer for its time, but why do they pick pcDuino? I suspect it has something to do with Al's previous wins against companies unfortunate enough to use a processor that used the term ‘media’ in their datasheets. Or perhaps it was the approximate date that web.archive.org had data on SparkFun’s website. The Web Archive date is conveniently before 2018 when the patent should have expired.

Can I also just say how amazing the Web Archive is? Their Wayback Machine is incredibly fun, but their mission and what they are attempting to preserve is critical for future generations to understand how our digital world changed over time. The fact that Al is using them is just tainting a good cause.

So what does Al want? If patent 6289434 is to be found legitimate (which it is not), they want royalties. Now, there is something to be said here about what I call the "American Patent Dream." It goes something like this:

You can see the flaws. I am a big believer in Open Source Hardware, but I do not believe that the entire patent system is trash. If SparkFun was infringing on actual IP, from a company that was actually building something, I would work very hard to not step on their toes. Al is not building anything. They just want to sit on their beach in Texas.

We’ve sold 221 units over the entire time we carried the pcDuino. You want to sue us for $500 worth of made-up royalties to use your bogus patent? Sure. Come get it.

What can you do about patent trolls?

Talk about it if you can. We are not the only small business that has to deal with this but we are in a rare situation where we may be able to talk about it. If you have been sued or received a ransom letter, talk about it! Trolls win when we're too scared to talk.

Email your representatives. Senators and Congress people do listen to the communication they receive. Email your governor. I'm lucky to have Governor Polis who is a big supporter of patent reform and fights against patent trolls. Let them know that patent trolls are Americans that are destroying American manufacturing and small business. Trolls are terrible for the economy, destroy jobs, gum up the judicial system, and hinder innovation.

Work with smarter people than me. Tell your politician to listen to and work with groups like the EFF and Patent Progress, who have spent years working on good solutions to trolls like Al.

We’ll let you know how the suit goes. We’re pretty sure it’ll be a fight, but no matter what, I’ve got to get back to actually creating something in this world.

Getting a Module FCC Certified