The Return to Shenzhen - Part 1

After checking out a handful of factories on the geek tour in 2009, it was time for me to return to China to visit some of the factories that make goods for SparkFun. I've got far too many pictures and videos for one post so I'm going to break them up into three posts. Be sure to checkout Part 2 and Part 3 as well!

We've done an astronomical amount of business over email. We email a supplier, request 500pcs of something, wire the funds, and the goods show up 6 weeks later. Multiply by a couple years and we've sent thousands of dollars all over the world. We never talk on the phone, and I've never met the majority of folks who supply us with products like cables, LEDs, tools, etc. The purpose of the trip was to meet face to face with a small fraction of vendors located in China near Shenzhen.

Ok, that's a lie - half the trip was about meeting vendors, the other half was about geeking out and seeing how neat stuff is made. 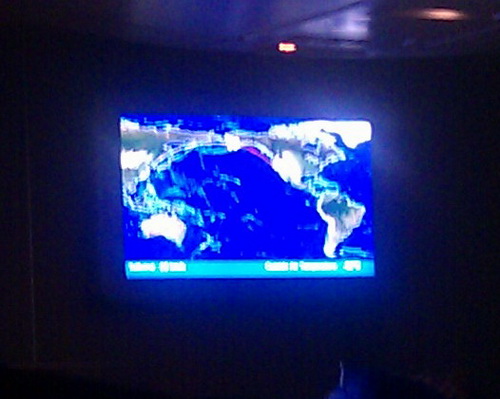 No matter how you slice it, it's still extremely painful to get to Shenzhen from Denver, Colorado. Yes the picture is fuzzy but that's how it feels 7 hours into a 14 hour leg from San Francisco to Hong Kong. 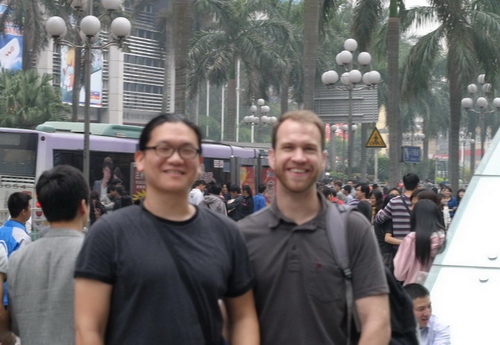 The three of us immediately descended on the electronics market where you can spend days roaming through the various vendors and stalls. This video will give you a rough idea of what it's like but the full scale of the market cannot be described.

Welcome to nerd heaven. Once you think you've seen everything, you realize that this is but one floor of one building. There are nearly a dozen buildings of this size - perhaps more! 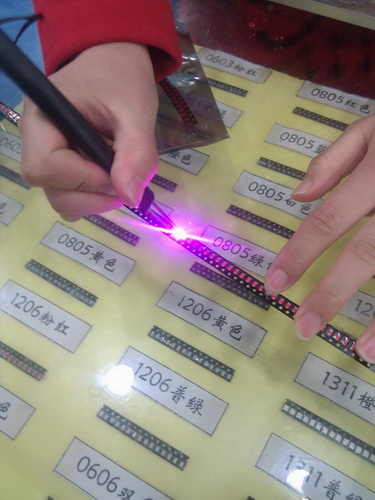 Testing pink LEDs! We've found them! Now we're trying to secure a good source. Pink LEDs were just one of many 'cool' products not normally seen. 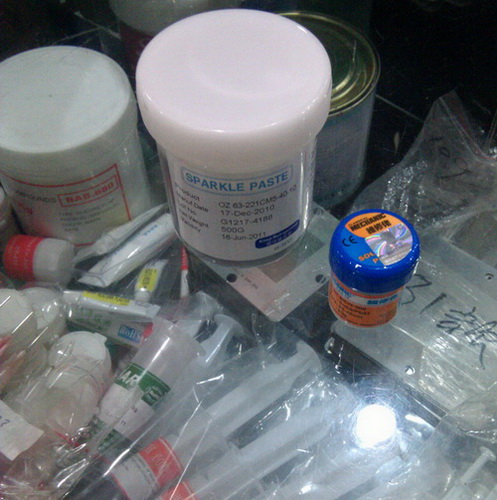 You discover all sorts of good stuff roaming around the market. I always find tool vendors particularly interesting. The small container on the right is the same solder paste that we already carry. The really funny thing is the larger jar. You may or may not know this, but our entire internal ERP system is called 'Sparkle'. Looks like we could be making solder paste as well. 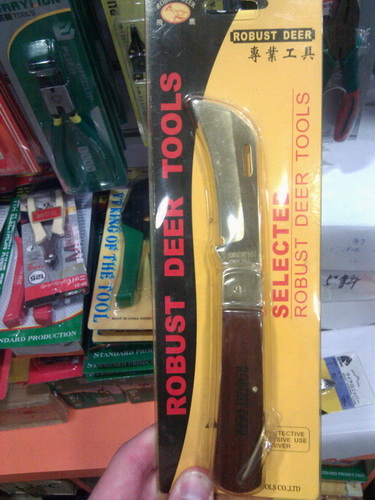 In the category of awesome names, I submit to you 'Robust Deer' line of tools. If I'm going to buy a knife, you'd better believe I'm buying the Robust Deer brand. 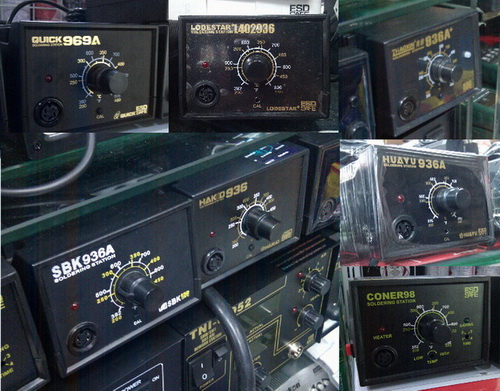 If you've ever used the SparkFun soldering iron, you'll recognize the '936' model. This is one of the most common models at the market. So common in fact, it became sort of a game to see how many different manufacturers of the same type iron we could find. We gave up after 7. 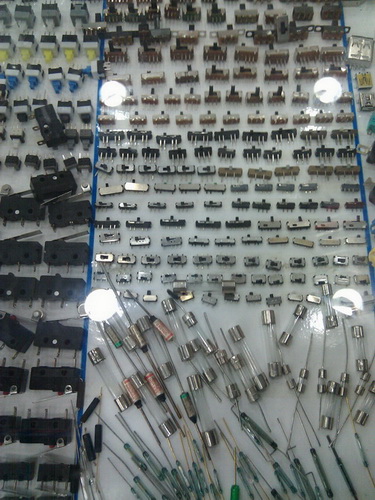 Need a switch? What kind? There is every kind under the sun and dozens of vendors ready to sell you very similar products. 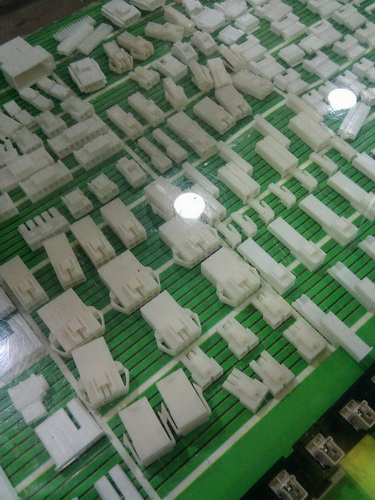 This may look like a simple picture of connectors, but to a geek it's the ultimate window shopping experience. You can go to your local market and shop various types of shoes and pants, but us geeks have to order everything online. We never get to actually shop for parts. The electronics market in Shenzhen is the one 'mall' in the world where I don't want to leave. 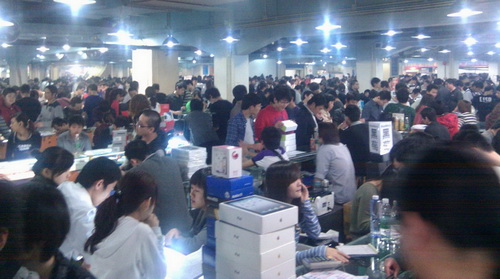 While there were shops and floors for all sorts of electronic goods, Bunnie had heard of a special market that dealt exclusively with bulk cell phones. That's right, you could buy a pile of cell phones. Heck yes we needed to see this!

This market was truly amazing. It was one of most dense I've been to, shoulder to shoulder with very little standing room. Every device imaginable was available (checkout the pile of iPads) and people were literally negotiating a spot price minute by minute. The raw phones were sold for cash and then taken to other parts of the market for parts, resale, or recycling.

There was so much activity! There were minute by minute shifts of any given phone. The amount and speed at which cash exchanged hands was numbing. Tellingly, the vendors surrounding the 'trading' floor sold every type of retail box for every type of phone manufacturer. 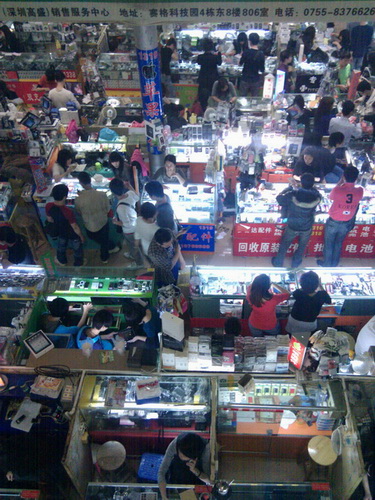 Below the bulk market was the ground 'more retail' floor where things were only slightly less hectic. This main floor was where a regular person could purchase a regular phone. How much of the bulk stream was redirected downstairs for retail is hard to quantify, but I don't doubt the re-packaged re-sale market is enormous. By it in bulk upstairs or one at a time in a retail box downstairs. 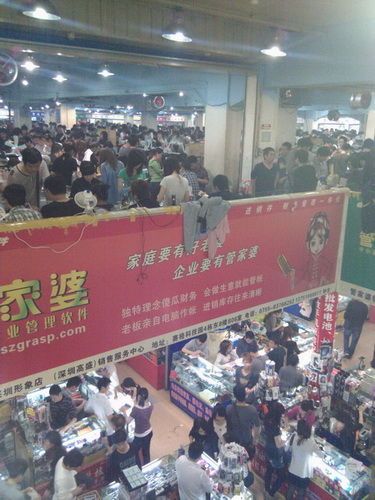 The building was packed! Bunnie had found yet another amazing corner of Shenzhen. 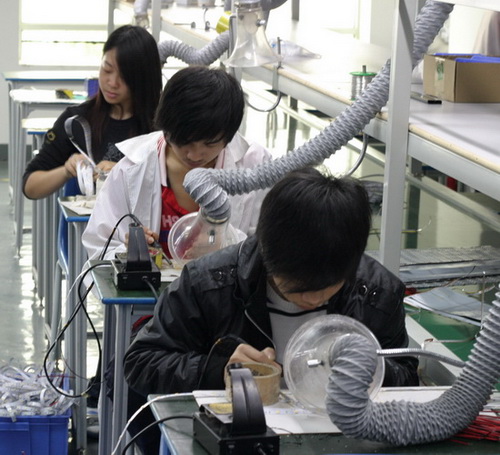 On Monday, Louis and I set out to visit two manufacturers. The first assembles our LED strips. Above, you can see workers assembling LED strips. What really struck me were the similarities between SparkFun and this company. We both have groups of techs with soldering irons and exhaust fans, assembling cool stuff. It's really not that much different from how we do things in Boulder. 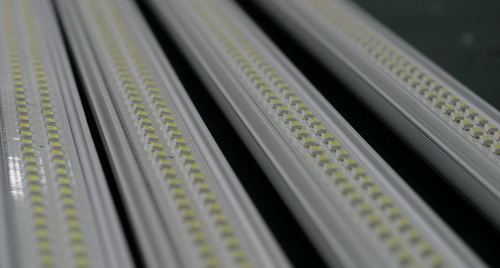 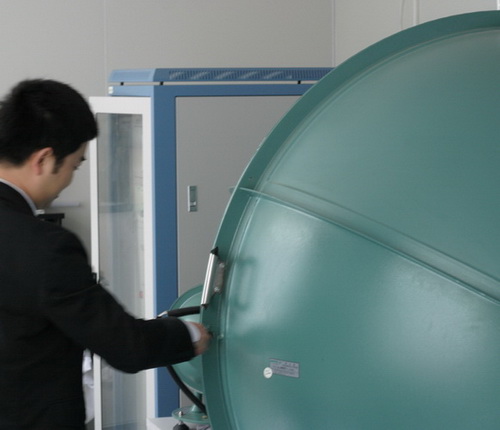 This is the large chamber that LEDs are tested in to make sure they are up to the required quality. 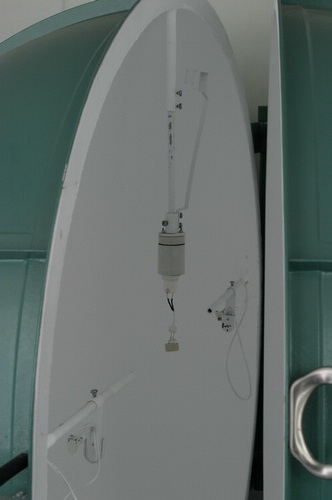 Inside the LED testing chamber. 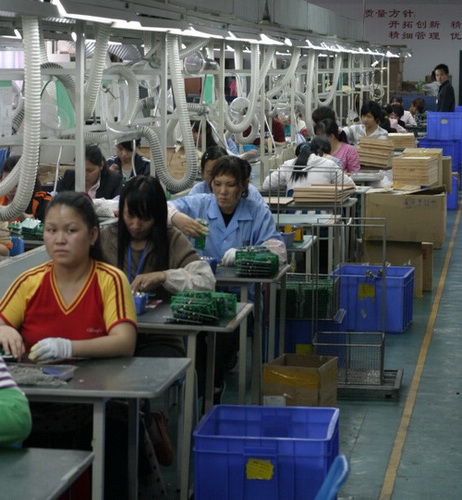 Next stop was a visit to the factory floor of where our Digital Multimeters are made. Notice how this factory floor looks very similar? 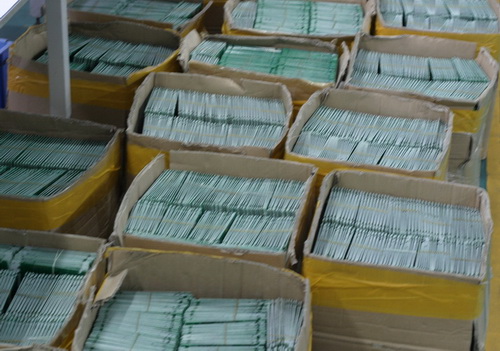 The floor was buzzing with activity! 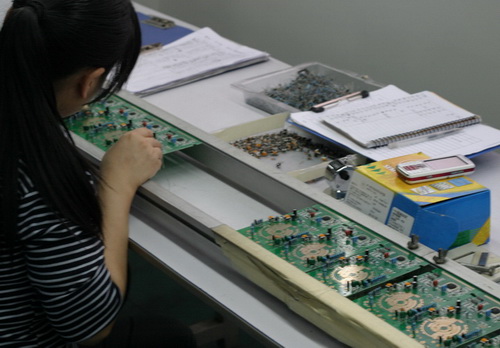 Here a worker counts the through-hole parts on a board. Directly after her there is a bath soldering step where all the components are soldered in one step. It's pretty amazing. What I'd also like to point out is how normal everyone looks. Everyone is dressed well, with hair styles and during any break people were always on their cell phones. 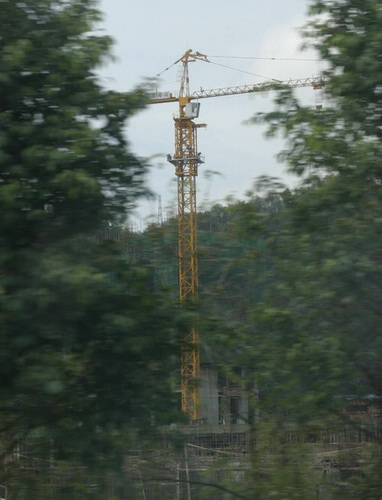 If there is a way to describe Shenzhen, it's cranes!

Everywhere there is construction. I counted over 45 during a 10 minute stretch of driving around northern Shenzhen! There is a mind blowing amount of new, 30+ story buildings going up. To give you an idea of size, Shenzhen province has 8.9M people. The entire population of Colorado (the state SparkFun lives in) is 5M people and Colorado is huge compared to tiny Shenzhen. Colorado has 48 people per square mile. Shenzhen has 11,260 people per square mile. 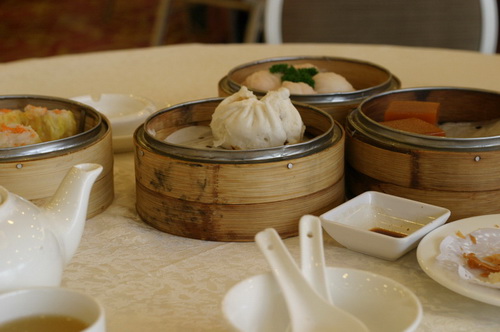 It's time to talk about food. The food in China is superb. Here is dim sum one morning. 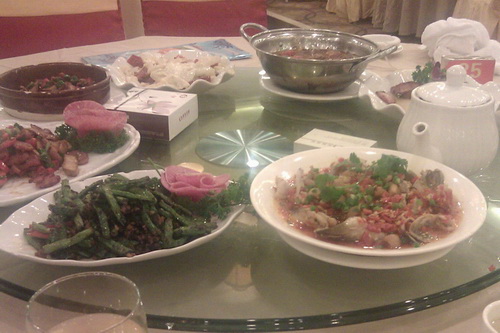 A full Chinese dinner, complete with tea. If you think this is like Chinese food in the states, you are very wrong. Note how little rice is served with the meal. Rice is only brought out at the end of a meal and is considered extra - you should be filled up on the meal, not the rice. 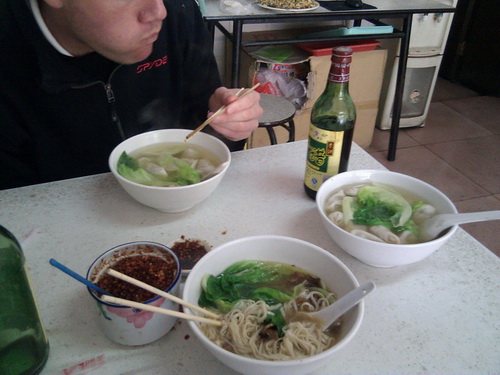 Noodles and dumplings for 8RMB ($1.25). This was one of the most amazing meals! If you can't use chopsticks in China, you'll be very hungry. 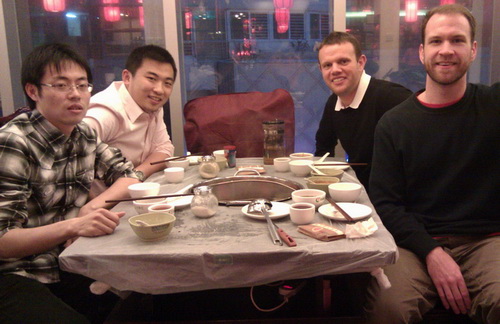 And finally the traditional hotpot with Steve and Eric from Seeed Studio and Louis and I. So happy! It was a fantastic trip!

Be sure to checkout Part 2 and Part 3 as well!