Turning your Arduino into a game console.

From the Gameduino website - "Tiny microcontrollers like the Atmel AVR used in the Arduino are now much more powerful than the 8-bit computers from the 1980s. So why not use them to play video games?"

We have to admit, that seems like a perfectly reasonable statement. So check it out - the Gameduino.

That's actually pretty impressive - those graphics are at least as good, if not better, than an old-school NES. The Gameduino is an awesome shield designed to work with the Arduino development platform (or any microcontroller with an SPI interface). As far as graphics go, the Gameduino outputs at 400x300 pixels in 512 colors. 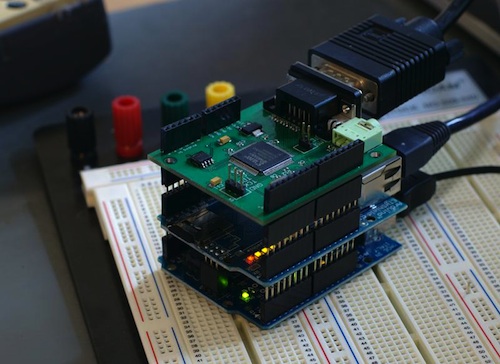 The Gameduino website does a fantastic job of documenting how they did the build and they even give you all the files you need to build your own. It's a very cool project! It's also nice to see a worthwhile Kickstarter project make it all the way to production. Great work!