Pete and Jim's Trip to the MIT Media Lab

Not too long ago (well, a little while now), myself and fellow engineer extraordinaire Jim Lindblom made our annual pilgrimage to the MIT Media Lab. Why do we do this? Well, I've come to know the Media Lab folk as some people with some unusual perspectives on technology and how people work with it. We like going out there to hang out and pretend to be smart, see what everybody's working on, talk about potential collaborations and or product ideas, etc. This time, we had the added incentive of going to see the Festival of Art, Science and Technology, and specifically the LightBridge display created by Susanne Seitinger. We helped Susanne out with some gear, so we had a personal interest to go and check it out.

But the weekend was oh, so much more.

I'll run this down in chronological order, starting on Friday morning when we met up with Leah Buechley (of LilyPad fame) to discuss the doings of her students. We saw some interesting examples of displays using muscle wire and some experiments with various types of conductive paint and ink. Next, we met with... a young gentleman (or woman) who has asked me not to reveal his (or her) identity, who's working on a really cool Arduino based guitar effects shield (I personally have high hopes for that one).

Following our meeting with REDACTED, we met for a round table discussion over lunch (awesome pizza, guys, much thanks) to get feedback and brainstorm with the group as a whole. We learned that they very much dig our curation of parts, and a not-so-small list of wants from us. Hey... who's your buddy? Me? That's right. We're here for you guys. (BTW, I talked to Digi about that cross-platform config tool for XBees you asked for. They promised me that they're working on it, but it's still a year out.)

After lunch, we went out on the Cambridge-Boston bridge to find Susanne Seitinger, who was hard at work getting ready for the display on Saturday night. 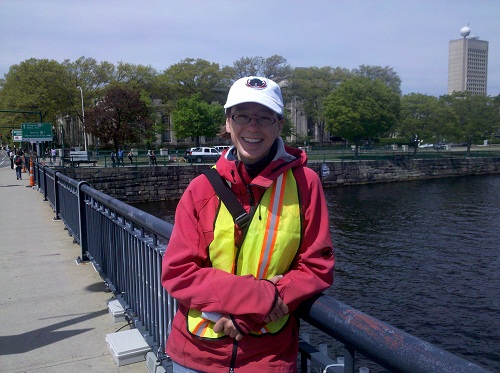 What a massive undertaking this thing looks like to me. The whole bridge is wired with Arduino Pro Minis paired with RS-485 Breakouts, plus IR proximity sensors so that it's interactive with people walking across the bridge. 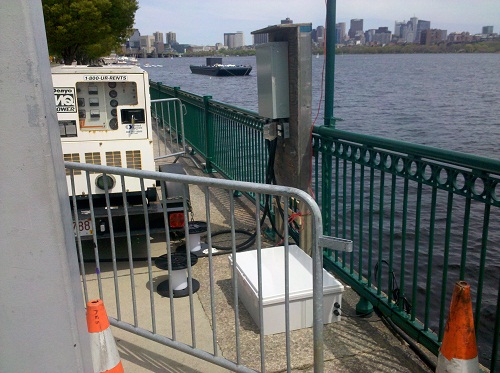 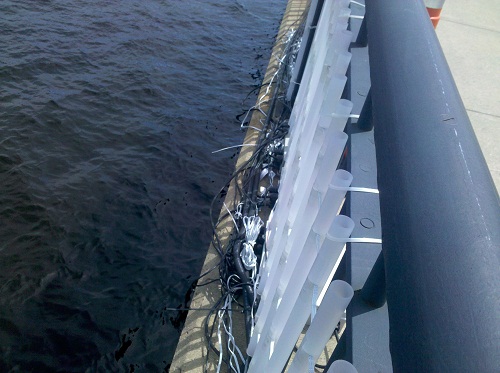 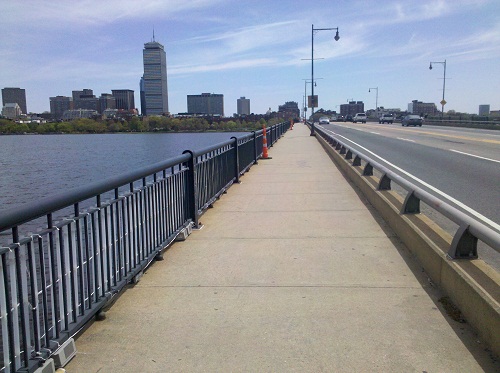 ...for the length of the bridge. No small undertaking.

The rest of the afternoon is a bit of a blur, honestly. But among those we met with were Jay Silver and David Mellis (of Arduino fame). Jay is a very engaging character, both technically adept and playful. Talking to him for an hour is like eating 4 candy bars: you come out of the room all sugar-high and being jazzed by everything. Dude also went and got me a Netti pot when I told him that I forgot mine at home. Let me know when you're going to be in town Jay, beers are on me. David is a mega-brain, who seemingly lives and breathes technology. I've been trying to get him to let us sell his Fab Radio for about a year now, and we're making some progress on that front, but he also want's to do a bit of updating of the design and may not get to it until later this summer. No trouble, David. We'll wait for you.

Next we had dinner and beers at Think Tank, then on to visit Miters Hackerspace. 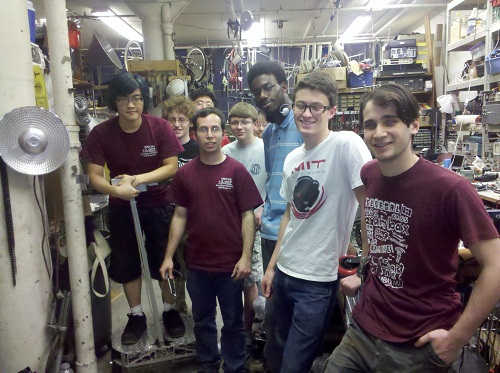 That's Josh Gordonson on the far right, our contact and tour guide.

What a crazy place this is. Tiny space, lots of people, many dangerous tools. Amongst other things, these guys have a penchant for taking otherwise only slightly dangerous pursuits, like rollerblades and push-scooters, and elevating them to danger levels of much more lethal passtimes, such as parachute-less skydiving. What am I talking about? Check these out. 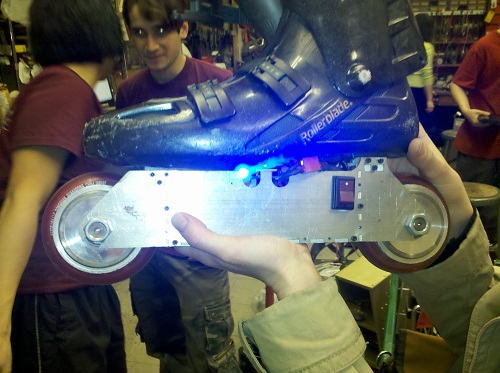 Check those wheels. There's a hub motor in each one. 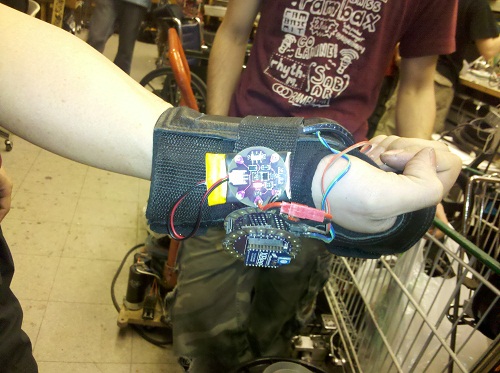 Throttle by pressure sensor in your palm, XBee'd to the skates. Clearly this takes some finesse to operate without going horizontal.

Then there's this guy... 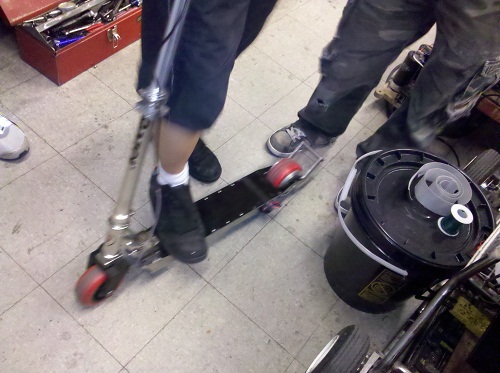 There's a hub motor in the back wheel. It seems like a really good idea, but the regenerative braking makes this thing come to a dead stop if you let off the throttle. You guys are masters of the alcohol-soaked dare. You have my admiration.

The next day found us at the Cambridge Science Festival and a mini Maker Faire. This one was much smaller than what we typically see in San Mateo, yet many of the same people and much SparkFun love was shared. The Miters guys came out, as well as the guys from MakeIt Labs. Much geekery was to be had.

We ran into Jimmie Rodgers at the fair (LOL Shield and Open Heart fame), and he took us on a tour of local hackerspaces for the rest of the rainy afternoon after an awesome stop at Redbones BBQ (I highly recommend this place).

The first hackerspace Jimmie took us to is called Sprout (sorry, I can't find a link for this one). Built in a 2-story garage, the downstairs houses a small machine shop and the upstairs keeps most of the electronic paraphernalia, with spaces for holding classes. 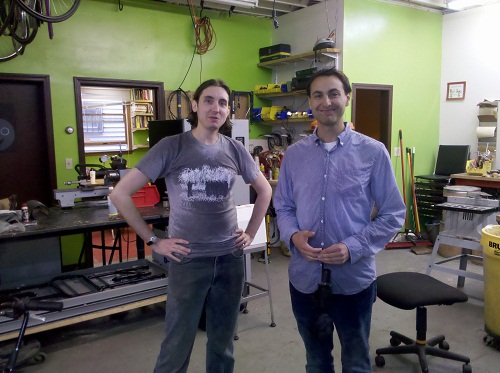 Jimmie Rodgers on the left, engineer Jim Lindblom on the right, downstairs at Sprout. 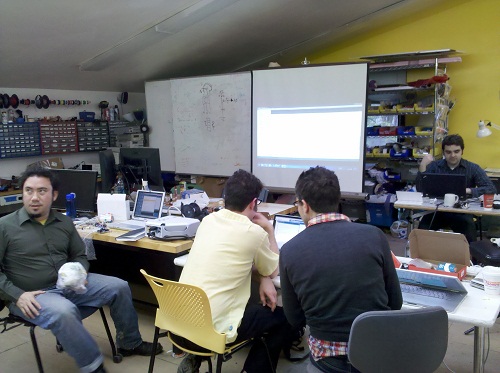 Next, we all hitched a ride with Chris Connors and went to the Artisan's Asylum. 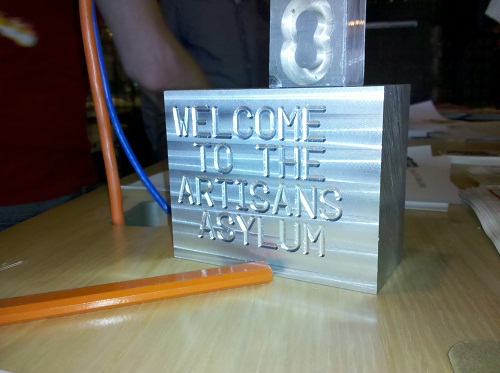 This place occupies the whole upstairs of a warehouse. It's HUGE, and it caters to many different skill sets, not just electronics (we wouldn't want to seem one-dimensional, would we?). In one corner there we a couple of guys building fabric-covered Kayaks... 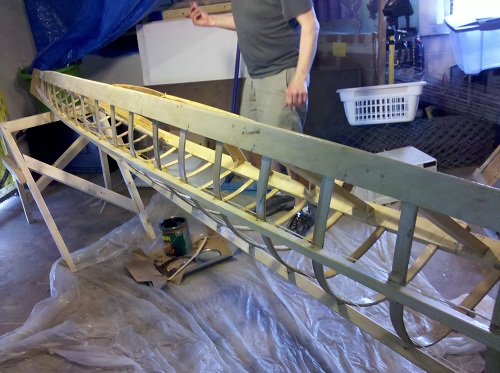 In another corner I saw what looked like a motorcycle engine powered sprint car (sorry for the bad phone pic)... 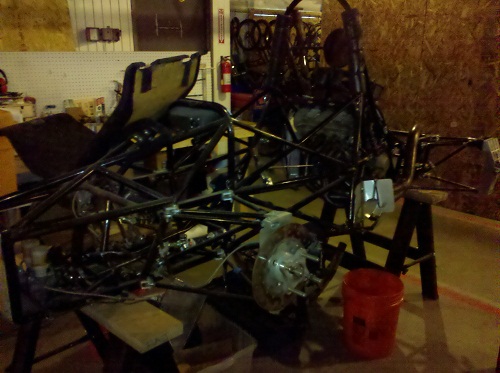 Then there was this thing... 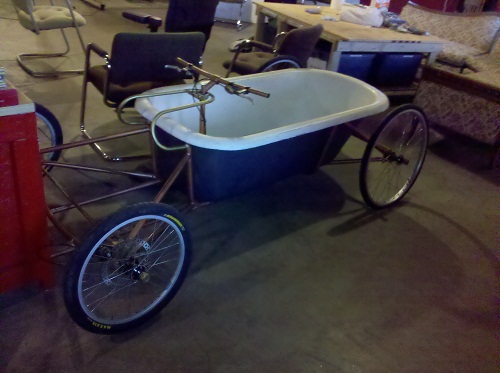 I hear it becomes unstable at around 50mph. You don't say! I'd still get in it. I wouldn't ride the Miter's rollerblades, but somehow I'd get in this. We all pick our own deathtrap, I guess.

We then settled down for an impromptu discussion about the state of hackerspaces in America. I gotta say that I'm pretty impressed with Jimmie. He's very much about spreading the "you can do this, too" word, and I think that's awesome. Thanks for touring us around, Jimmie.

Last on the agenda for the trip was to go out and see Susanne Seitinger's Light Bridge display. We made our way from the hotel to the river amidst throngs of other gawkers-in-the-dark to ultimately find Susanne basking in the glowing success of her project (see what I did there?). It was difficult to capture the full scope of what the display was capable of, further hampered by my Android video, but here's my small attempt:

The full display sequence lasts for several minutes. This is just a small taste.

And so ends another trip to the Media Lab. Thanks to all of our various hosts, we'll see you guys next year, and thanks for reading.

New Products to Make You Tingle with Joy!