Alright, time to announce the winner of our caption contest! First off, thanks for all of you who responded. Over 600 captions made this a tough one to pick. If you didn't win, fret not - there will be another caption contest sometime in January. Plus, there is always Free Day! Anyways, the winner is heyjoe and his caption, "That mohawk makes you look udder'ly ridiculous." 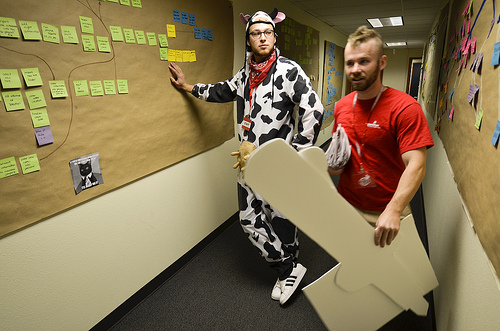 Congrats heyjoe!  We'll be in touch to help you claim your prize. Now back to your regularly scheduled programming - check out this cool project from Supermechanical.

What you see in the video above is called "Twine." Twine is a small square enclosure that is WiFi enabled and has a few integrated sensors built in. The beauty of Twine is in its simplicity - using a straight-forward web application, you can program Twine to perform basic "if/then" functions. For example, put the Twine module on your front door and tell it that "if the accelerometer detects a knock, then fire me a text message." In addition to the accelerometer, there is an on-board temperature sensor as well as a port to easily connect other external sensors. They have already built external sensors for moisture and a magnetic switch, as well as a sensor breakout board with endless possibilities. The potential for hacking/tweaking is definitely there. 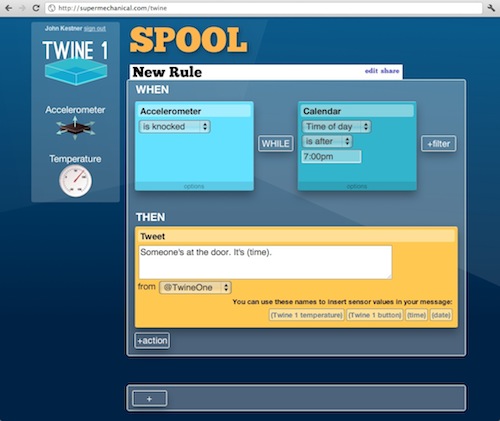 This a very cool, straight-forward, and polished project. We like it because it really breaks down the barrier to physical computing - yeah, maybe that takes some of the fun out of the "initial discovery" phase, but it certainly will inspire people to create things. It won't be long before people want to explore beyond "knock detection" and start creating their own widgets and projects using Twine. Be sure to check out their Kickstarter page if you'd like to make a contribution and/or get your own Twine. Very nice work!