A brief history of Solid State Depot, the Boulder Hackerspace.

If you haven't heard of the terms hackerspace or makerspace, then you might have been living under a rock for the past few years! For those unfamiliar with hackerspaces, they are, in short, community workshops, hangouts, laboratories and sometimes something much larger. Each space has its own uniqueness, and the way each operates varies widely from one space to the next. However, they all seem to share one common trait: bringing awesome people together.

Chances are there is a hackerspace in your town, or at least a nearby town, that you may be unaware of. Jumping over to the official hackerspaces website will give you a list of all the spaces. The site is also rich in information and history for those who are being exposed to all of this for the first time. As exciting as it is to talk about hackerspaces and their impact on the communities they from in, we're here to talk about one space in particular, Solid State Depot, the Boulder hackerspace. As both a SparkFun employee and a founding member of Solid State Depot, I tend to play devil's advocate for both entities. I write to you today to not only give you an insider's scoop into the making of a hackerspace, but also to extend an invitation to all newcomers and well-wishers.

As with all great things, most spaces begin as an idea. When I first went looking for a hackerspace here in beautiful Boulder, CO, I was surprised to learn that there really wasn't one yet. Instead I found a ragtag group of misfit hackers meeting at a coffee shop every week. It was this group that got the idea off the ground and sparked what would be the space we have today.

To get the initial word out about forming a space in Boulder, a small presentation on makers and the DIY movement was given at the local college, University of Colorado - Boulder. There, the first generation of core members was formed. 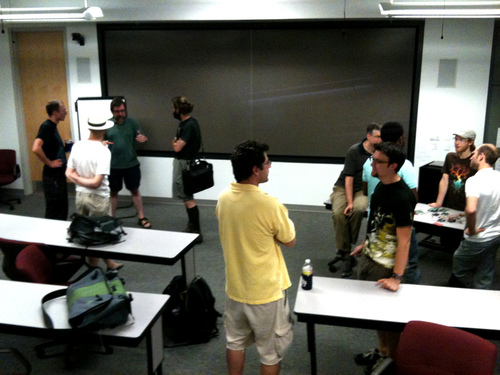 Following the CU presentation, there was enough interest to form a group and choose a title. A website was made and a logo was designed. Solid State Depot was born. From there, it was a slow process of keeping interest up and getting new faces to join in the fun. For months, the group met at a local coffee shop. Ideas were discussed. Projects were shown off and shared. Good times were had. 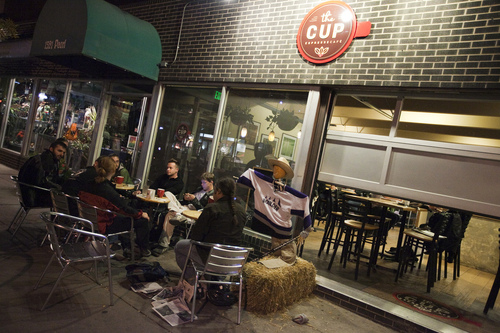 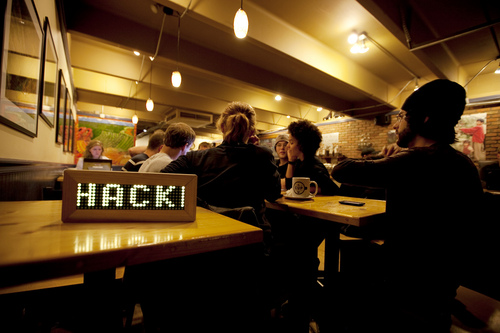 As the months went on and the group grew, the idea of getting our own space continued to creep up. After lots of discussion about where to locate and in what type of space, our big break finally came near the end of 2010. One of our members moved out of a shared space to move into a larger shop, leaving the other vacant. It was just what we needed to get started. We shared the building with a furniture restoration shop. Making messes and being there late was not an issue and the large bay door made us feel like a real workshop. 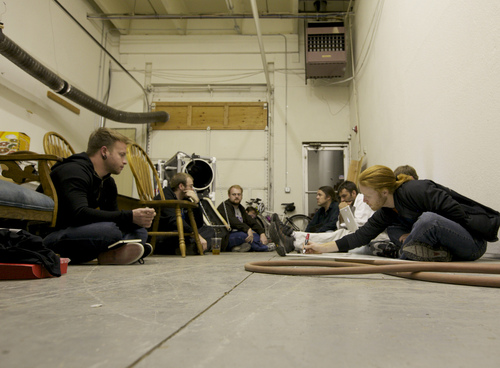 Our first meeting in our first space. 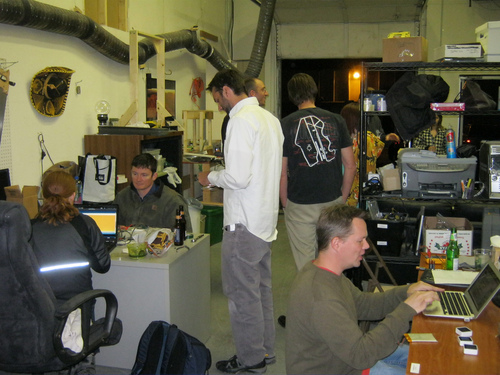 We managed to fill it up rather quickly

To garner even more interest in SSD, a few members participated in Ignite Boulder, an ever-growing evening of presentations limited to 20 slides in 5 minutes each. There, we presented the idea of hackerspaces to a sold out Boulder Theater, with a little plug for ourselves at the end. We were officially "out there."

The space was alive and running. Soon the projects began flourishing. Several of our members began work on their Apogaea/Burning Man project. Others set out disassembling donated appliances. A few older, big-screen projection televisions had been dropped off, and we wasted no time taking them apart. We managed to harvest a few fresnel lenses and have some fun with them. 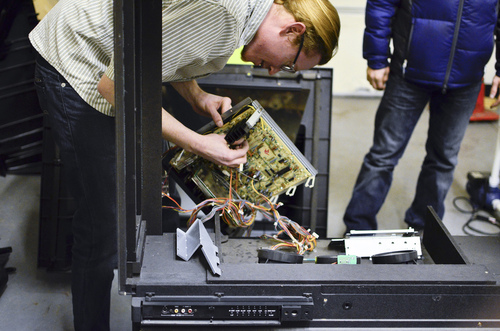 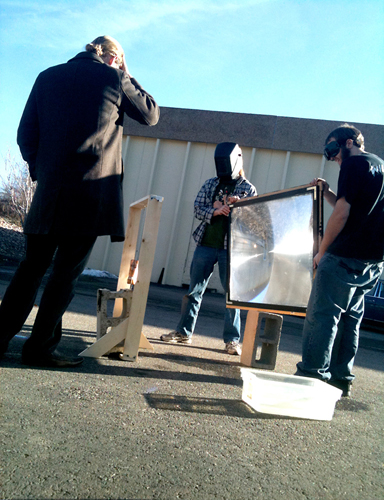 Trying out our fresnel lens on a homemade Hero Engine.

The community was growing. New faces began popping in and some managed to stick around. As was the case when we met at the coffee shop, we stuck to having a weekly Tuesday gathering, open to the public. Saturday hack and BBQ sessions became regular as well. 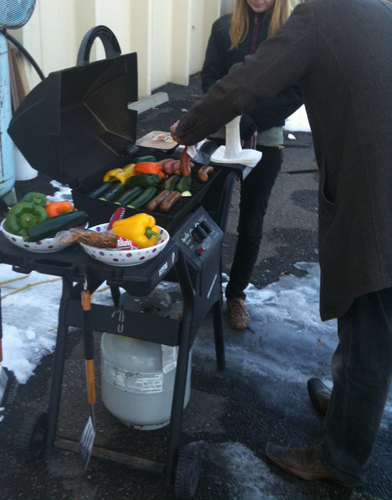 Tinkering continued to be on the rise. We acquired more of the space, as the tenant we shared with moved more of his tools out. And, of course, we had our fair share of fun with LEDs. 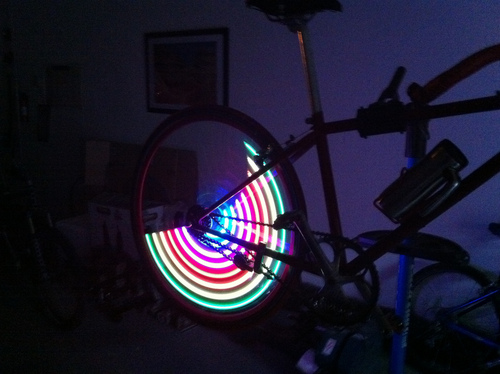 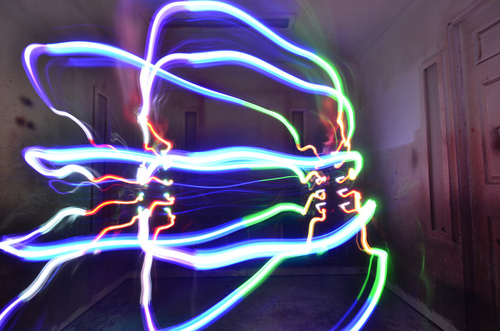 Things were going well. Then after being in our first space for roughly 10 months, we hit our first snag. The current tenant, the furniture restoration shop owner, no longer could justify holding onto the space with the amount of work he was doing there. Thus, we could no longer piggy-back on his lease. After talking with the landlord, it was clear that the price of a new lease in the current space was worth looking elsewhere. Working fast, we came together as a team and managed to find a new building, not very far from the first. The move was on.

It is in this space that we currently reside. Since the move last August, we have continued to grow and gain more people and interest. A second generation of core members has taken the the torch and moved SSD into the present. We have grown into a full-fledged hackerspace, brandishing our big-kid pants. We became an official Colorado non-profit. Insurance was procured. Bank accounts were established. And, after months of sharing one MiFi account between everyone in the old space due to to a lack of providers in the area, we finally got our own internets!

We continue to hack, tinker, create and have fun, but we also strive to be a place where education and ideas flourish. Much like SparkFun, we want to be a place where people can come, hang out and leave having learned something they didn't know before they walked in. We have put on several workshops in the past, and there are many more on the horizon. There has also been a lot of collaboration with event coordinators, other hackerspaces and the University of Colorado.

The number of new faces that stop by every week continues to grow. A record breaking attendance of 30 people in one evening was achieved less than a month ago. We continue to reach out to other local businesses and workshops, and they continue to help us out. The sense of community is growing. Several members, who are also students at CU, have banded together and created an amazing autoponics project, housed in the space, complete with university funding. It even got some publicity alongside SparkFun and SSD. Some of the same students have put together a hackerspace student club at CU to extend the maker mentality into the student body. As of this week, it has officially been approved and will host it's first meeting today. There is also talk of combining forces with other local businesses and entrepreneurs to create the ultimate maker experience. Big things are in the near future and we'd love for you to be a part of them. Only time will tell what form Solid State Depot will take on next. But, one thing is for certain, we are here to help put Boulder on the map as a makers' paradise. 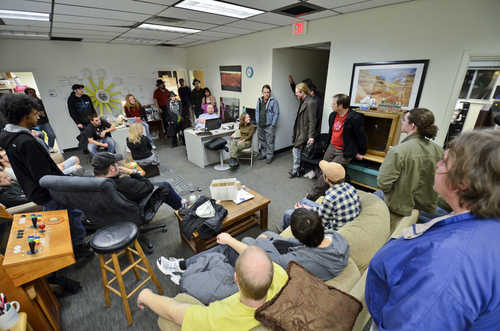 One of our most highly attended meetings to date 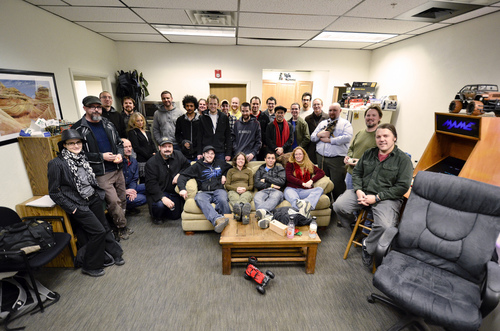 Several of the current core members and some new faces

So, this is a call to arms, to all makers in the area, and to all makers around the world. Get out there and visit your local hackerspace. You might just like what you see. If there isn't one in your town, start one. It all starts with an idea. At Solid State Depot, we are always looking for new friends and new members. This month we are holding a member drive to help reduce the burden on all those who help keep the space afloat. The more people chipping in, the less it costs everyone. You can read more about it at our dues page. Feel free to drop in on any of our Tuesday meetings to get a feel for us and the space. We meet every Tuesday, beginning around 7:30pm. And, be sure to keep up with our blog for workshop information, directions, and to just see what we're up to. The amount of involvement with the space is entirely up to you. Come hang out and pick some brains, or sign up and start hacking. The choice is yours. Hope to see you there! Happy hacking!