Testifying in Front of the US Judiciary

Read about Nathan's testimony on Copyright and Intellectual Property in front of the House Judiciary Committee.

Late on a Friday afternoon, SparkFun got a call from Joe Keeley, Chief Counsel to the Subcommittee on Courts, Intellectual Property, and the Internet. We get a lot of odd calls but this one was especially interesting. Joe was responsible for finding industry experts to help educate the House of Representatives on the pressures on business in regards to copyright and intellectual property (IP). Joe wanted SparkFun to speak in front of 20 house subcommittee members the following Thursday at 9:30AM in Washington, DC. Are you kidding?! I jumped at the chance! By Sunday, I had received my formal invitation, tickets for my wife Alicia Gibb (president of OSHWA) and I were booked to DC, and together we began a two-day writing odyssey. Alicia did an amazing job proofreading and improving my written testimony. I can't thank her enough.

SparkFun is transparent about almost everything we do and contributes as much as it can to the open source community. Checkout my TEDx talk on IP Obesity. I feel strongly that, as the patents system is currently structured, intellectual property leads any business to misspend resources at best, and at worst, can do serious harm to the health of a business.

Joe had gotten my name from Michael Weinberg at Public Knowledge. Michael is a big proponent of Open Source Hardware; we had met a few months before when Public Knowledge hosted the Open Source Hardware day in DC. Public Knowledge and the Electronic Frontier Foundation (EFF) do a lot to try to curb overreaching patents and are attempting to help guide the reform of copyright and patents. I was happy to give my input and share stories of what SparkFun has been up against when it comes to copyright and IP (SPARC International was a thing, and ask me about SparkTruck someday).

To prepare for my testimony, Joe instructed me to watch some of the previous hearings to get a sense of how the hearing would work. I would be testifying at the second hearing of a two-part series on Innovation in America, so I watched the first episode. It was slightly terrifying to read and listen to Sandra Aistars's testimony. She represented the Copyright Alliance and is exceptionally well-spoken! The entire panel of speakers was very strong, and I felt completely out of my league. Watching this previous testimony really set the tone for what I was about to do. 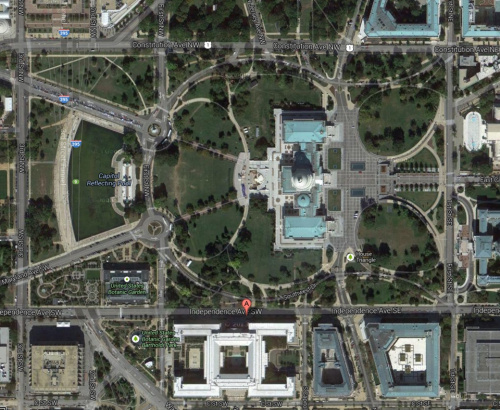 The Rayburn House is located right next to Capitol Hill.

Here is the hearing information and my written testimony. This is how testimony works: Each panel member (witness) is asked to compile written testimony and have it turned in 48 hours before the hearing. This gives committee members (and lobbyists) a chance to read the viewpoints and to compile questions to ask individual members or the panel as a whole. The written portion can be as long or short as you care to write. At the actual hearing, each panel member is given five minutes to speak = 25 minutes. Then the most senior member of the committee (Mr. Coble) is given five minutes to make statements and ask the panel for clarifying questions. After they have used up their time the next ranking member gets five minutes. There are 20 members so this hearing could last for two hours. I rather love Q&A, but this was going to be a task! 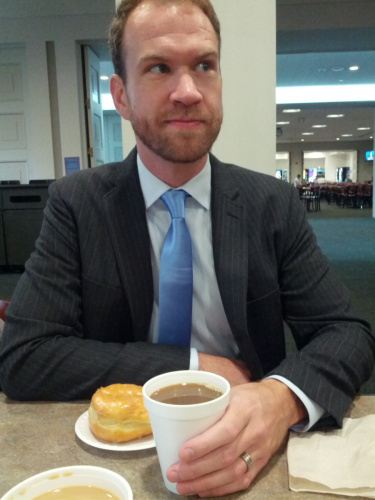 The first and last time you'll see me in a tie.

The hearing was scheduled for a start time of 9:30AM in the Rayburn House, which meant Alicia and I needed to get to the building by 8:30AM. I may need to remind some readers that 8:30AM DC time is 6:30 Colorado time, which means my wife and I were up at 5:30AM. This was going to require lots of coffee and doughnuts. 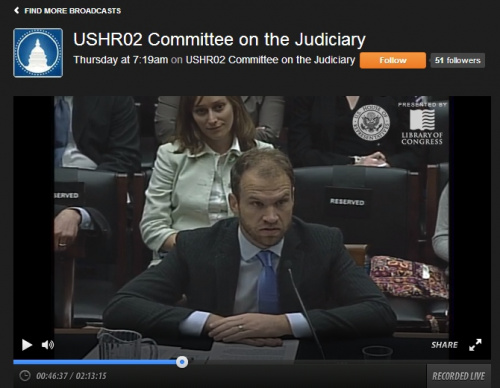 It's much more entertaining to watch Stephen Colbert speak on immigration, but you get the idea.

Checkout the video of the hearing if you need to kill two and a half hours. My oral testimony begins around 43:00. At 1:20 there is a fun question/interaction between Representative Marino and myself. It's a bit like running around in circles, but it was fun to debate someone! 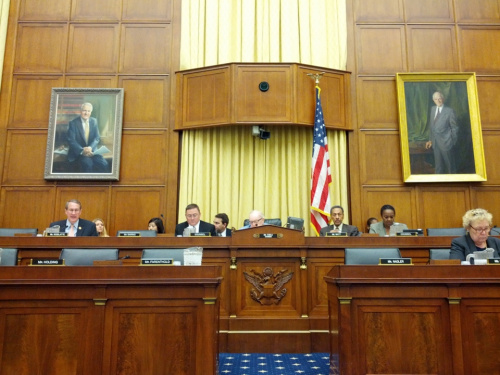 What a subcommittee looks like from the panel seats

I cannot begin to comprehend all the ins and outs of Washington. I think this was one of the reasons why SparkFun was chosen to speak; we are actually running a business and building stuff. There have been previous witnesses that represented groups rather than creators. I am a democrat who believes strongly in women's rights and immigration, so I believe Ms. Chu and I could see eye to eye on many things, but Ms. Chu's question came off especially canned. With "should the copyright system be scrapped?", Ms. Jackson Lee had the most direct and thoughtful question of the day. To give you an idea of the politics and undercurrents going on, you may want to checkout some of the articles written about the two hearings:

Here are the points I hope I communicated to the committee:

Politics are very messy. I am thrilled to have gotten the chance to participate. Overall I was impressed that most committee members were genuinely seeking out an education in the interaction of business and patents, and I believe I helped push patent and intellectual property reform in the right direction. Now I gotta get back to building stuff!