On April 5th, teams from around Colorado will try out their miniature Mars rovers in the Great Sand Dunes.

Robotics competitions are a great way to hone your skills by designing with a purpose (and a deadline). There are competitions large and small all over the world, for all skill levels, with all kinds of goals, both constructive and destructive. If you've been following SparkFun for a while you're probably aware of our Autonomous Vehicle Competition, which will be held at the Boulder Reservoir on June 21st. The AVC challenges are for fun and glory, but there's another robotics competition coming up in April that challenges you to design a Mars rover and try it out in a remote and spectacular part of Colorado. 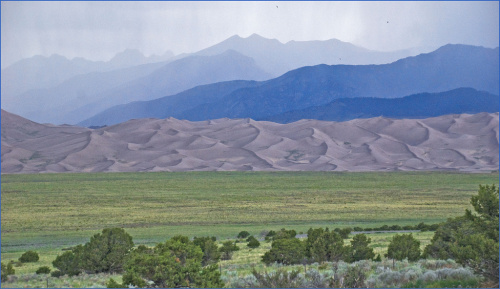 As a wise man once said, space is big. Really big. Big enough that it's difficult, expensive, and risky sending people everywhere we'd like to go. We've been sending machines instead (and hopefully in advance) of us for decades, and the knowledge gained from these programs has literally rewritten the book on our solar system and beyond. The first robotic explorers just flew by planets, followed by orbiters, followed by landers; each of which provided more and more spectacular results. But even given the astonishing technical achievement of being able to softly touch down on an alien world, there was always an interesting rock just out of reach, or a mountain on the horizon, that scientists wished they could visit. Rovers have given us the mobility to truly start the detailed and long-term exploration of these worlds. 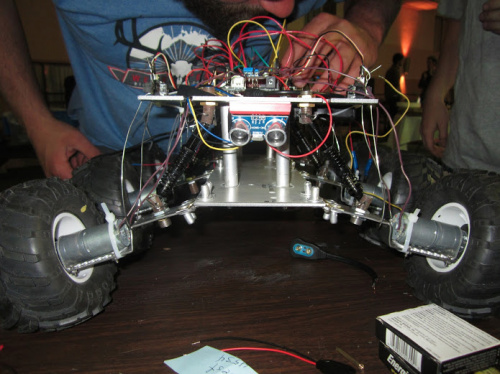 The first planetary rover was Russia's Lunokhod ("moon walker") 1, which explored the moon for almost a year in 1970. More recently the US has had great success with Mars rovers; Opportunity is still operating after an unheard-of ten years on the ground, and the massive mobile laboratory Curiosity is providing new insight into Mars's complex geologic past (as well as having a cranky alter-ego). Many more rovers (and flyers, and even submarines) are on the drawing boards of NASA and other organizations. Unfortunately, even the most cost-effective missions are at the mercy of agency budgets, which are currently cut to the bone and beyond. (Write your congresspeople.) 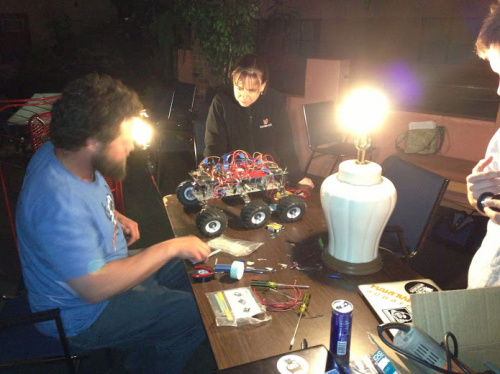 Because space is so big, planetary rovers are an ideal application of autonomy (the ability to make your own decisions). The problem is the huge distances involved. For example, depending on where they are in their orbits, Mars may be anywhere between 55 and 400 million kilometers away from Earth. In the vacuum of space, radio waves travel at the speed of light, which means it takes between 3 and 22 minutes for a command to get from you to your rover. And that's just one-way; any responses or returned video would take just as long to get back to you, so you could be waiting 45 minutes to find out whether your rover fell into a ravine or not. Imagine trying to directly control a vehicle with that kind of lag. (You think gaming is tough!) Not to mention that there are periods when the sun is directly between Mars and Earth, entirely cutting off communications for a week or so. It would be nice if your rover was able to perform investigations on its own during that time.

In practice, rovers are such a valuable asset that their operations are very carefully planned in advance, and onboard autonomy is usually limited to catching any unforeseen problems while command sequences are being executed. But autonomy is increasingly becoming an effective cost-saving measure on numerous missions (Deep Space Network time is limited and expensive), and we'll only see more of it in the future. 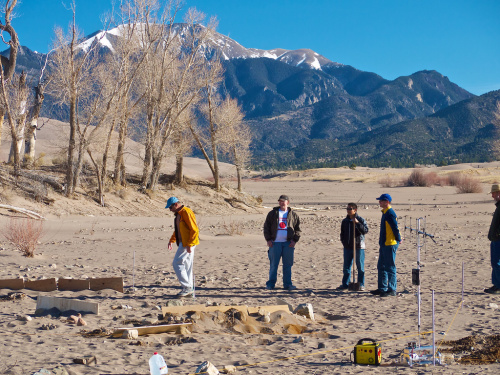 Which brings us to the Colorado Space Grant / Adams State University Robotics Challenge, held annually at the Great Sand Dunes National Park in southern Colorado. This challenge is designed to give amateur teams a taste of what it takes to create and operate a Mars rover. The vehicles need to autonomously navigate courses of varying complexity and ruggedness, with the possibility of unexpected obstacles, high and low temperature extremes (April in Colorado can have anything from 80 degree days to whiteout blizzards), and the ever-present blowing sand, which has a way of getting into everything, no matter how well-sealed. 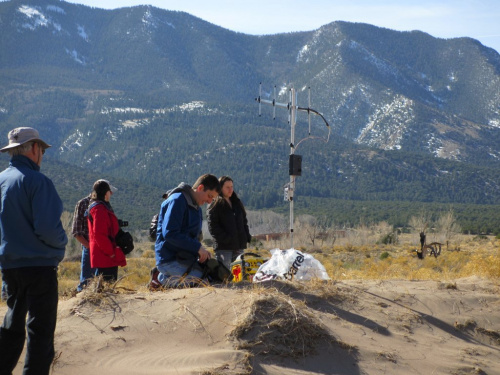 A unique part of this challenge is the central radio beacon. To more accurately simulate the conditions a rover would encounter on another planet, GPS receivers are not allowed. (GPS signals are broadcast by a constellation of satellites in earth's orbit; these signals won't be available anywhere else until we put similar constellations around other planets.) Instead of using GPS, a 433MHz radio beacon is set up at the center of the course area. The robots must move from the starting point toward the beacon, navigate around any obstacles in their path, and return to the original course. The various challenge courses are laid out in spokes from the central beacon, allowing multiple courses to use the same beacon simultaneously. 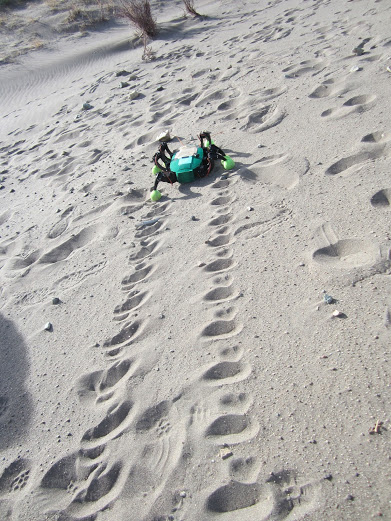 True radio direction finding is a difficult task. To make the beacon more accessible to amateur teams, a clever technique is used. The beacon consists of a rotating Yagi antenna that continuously broadcasts the compass bearing of the beam as it rotates. The antenna pattern from the Yagi is highly directional, so the robots will only receive the beacon as the beam sweeps past them. If a robot receives the beacon, the data will contain the reciprocal bearing back to the beacon. Just knowing that information doesn't help you if you don't know your own heading, so an onboard compass is used to figure out what direction you're pointing.* Once you know both of those angles, you can figure out the direction you need to drive to get to the beacon. 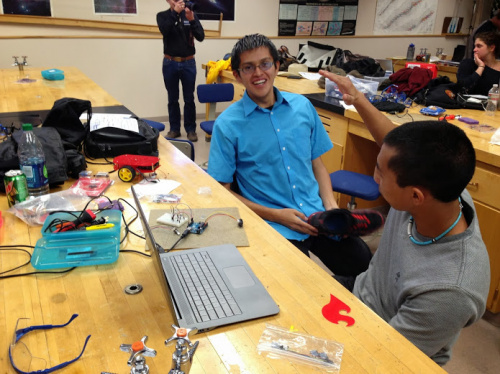 Befitting the institutions behind it, the primary goal of this challenge is education. Instead of giving you the rules and saying "good luck," the Colorado Space Grant Consortium provides pre-challenge workshops in basic skills like soldering and programming, and provides as much information as they can to help teams succeed. Mass and cost are constrained to give as many teams as possible the opportunity to participate; robots must weigh under 4kg or 1.5kg depending on the weight class, and the hardware cost is limited to $500. The rules are also specific about protecting the course environment (the Great Sand Dunes are a national park that contains protected and fragile ecosystems), and that the real goal of the challenge is not to win through finding loopholes, but through solid design, good craftsmanship, and testing, testing, testing. 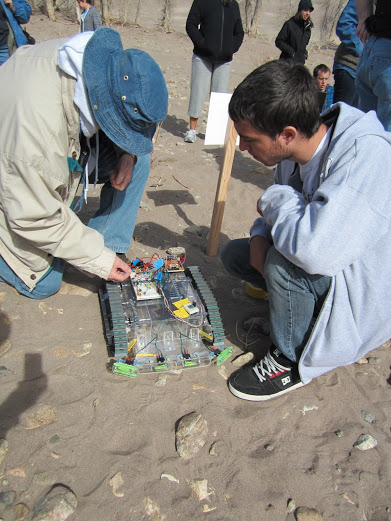 The Colorado Space Grant Consortium, and the NASA-funded Space Grant Colleges in each state, exist to give students practical engineering experience through challenges like these and numerous other opportunities. COSGC alumni have gone on to design, build and operate the current generation of Mars rovers and many other space missions, and work at many interesting places, including SparkFun. 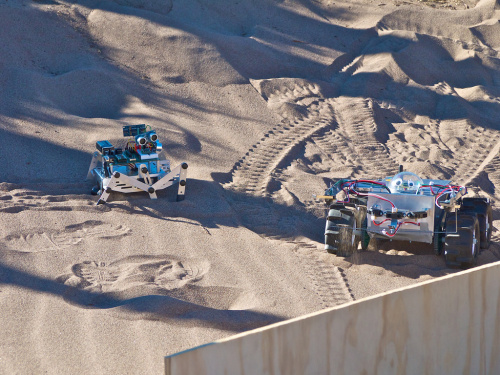 This year's Robotics Challenge will be held on April 5th from 8AM to 11:30AM, just past the visitor's center at the Great Sand Dunes National Park which is about a four-hour drive from Denver. The public is welcome! If you'd like to be involved in next year's competition, you can find more information at http://spacegrant.colorado.edu/statewideprograms/robotics-challenge. Registration is in December, so get roving! 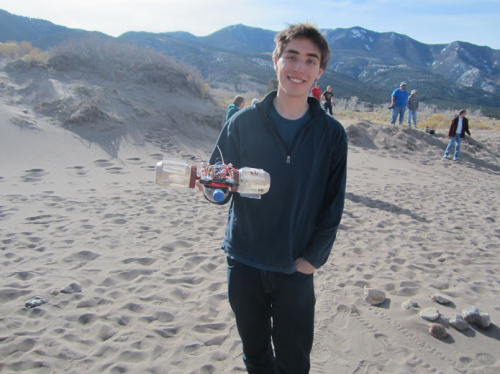 * Unlike Earth, Mars has a very weak magnetic field, so this likely wouldn't work in real life, but for the purposes of the challenge you have to constrain the problem somewhere. Interestingly, there are indications that Mars had a much stronger magnetic field in the past that, like the Earth's magnetic field, once protected the surface of Mars from being blasted by solar radiation as it is now. Why the field disappeared is an important question scientists are trying to answer. Write your congresspeople.

New Product Friday: There is no Spoon