A summary of an awesome homemade robot built by SparkFun customers

For those of you who have been living under a rock and weren't aware, we really love robots around here. Flying robots, cute robots, ingeniously engineered robots and generally chill robots are always guaranteed to catch our eye. With this year's AVC quickly approaching (and with it being National Robotics Week), I wanted to do a shout-out to an awesome customer project with a wickedly tough-looking robot. 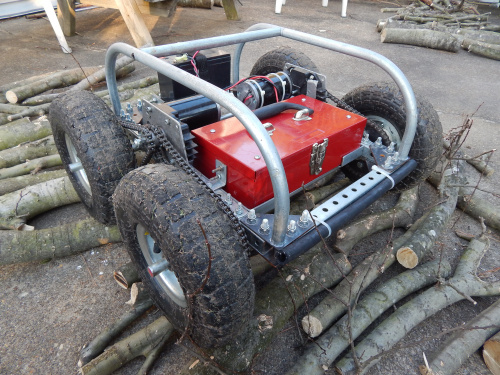 The Hormes robot was created by Charles and Richard Raitt, who have both participated numerous times in the FIRST robotics competition. Both brothers bring their area of expertise to the robot design process, with Richard working on the mechanical design and Charles working with the electrical systems. Beside the joy of just having a beastly, 56-pound robot, they decided that they wanted something where they "can hand the controls to someone at a Maker Faire and not worry about it getting broken. No promises about anyone's shins though..."

The original idea was drafted up in SketchUp before they began building.

A mid-project picture of the working drawing

With the design mostly worked out, it was material gathering time. Most of the chassis was bought from brick and mortar hardware stores. A stock 1/8" steel plate was cut and drilled on a press to create custom corner brackets. However, the 1/2-inch trade conduit (which is actually 5/8-inch ID) used in the roll frame was actually gathered as scrap practice bends from a local vocational school. This brings up a great point - where do you collect scrap materials for your projects? Let us know in the comments! Richard then counterbored the steel axle slug inside the joints to accept an Allen bolt. A 2-inch long slug of the steel axle holds the front and back sections of the rollcage together, and barbed "tube connector nuts" hold the crossbar on and the rollcage to the frame. Richard also coped the crossbar ends to create a friction fit. This design is solid enough to even support Richard standing on it!

One of my favorite features of this robot is the use of the dual-sprocket on the gearbox shaft to drive the wheels. Not only is it a slick-looking design, but this design also allows a higher clearance on the robot. The interwheel space is clear of chains, allowing Hormes to tackle larger obstacles. 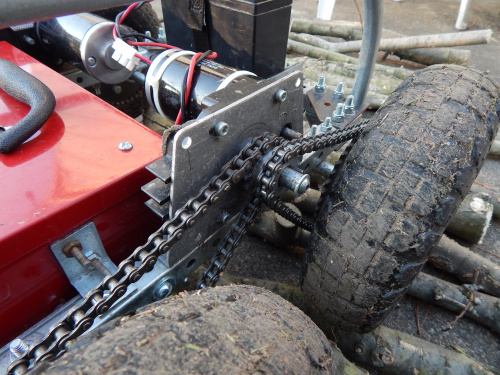 After getting the chassis together, the first integration of the electronics with the mechanical build came together beautifully, just in time for Christmas. This was the first functioning version of the robot, though it wasn't weather-proof or safe from the mud (no one wants their robot's insides looking like this after a test drive). 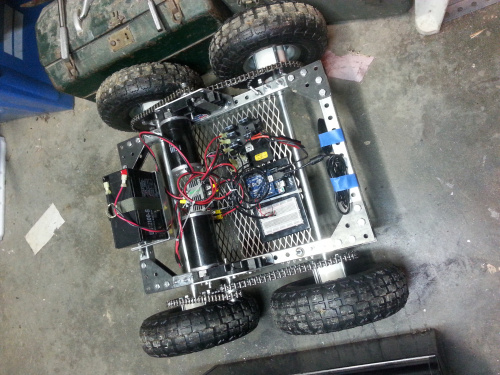 First iteration of the Hormes robot

Two TALON SR motor controllers drive the two CIM brushed DC motors. The system is powered off of a sealed lead acid battery at 12V, 10Ah, running through a power distribution board. Each motor connects to its own 30A auto resetting breaker.

The brains of the Hormes are actually surprisingly simple. Charles used an Arduino Uno R3, a USB Host Shield, a PC USB Xbox360 wireless controller, and a SEEED Studio Protoshield. The proto shield has two red indicator LEDs on it. An XBox360 wireless controller functions as the driving remote. You can check out the code on the Arduino here. A heavy duty tool box functions as the housing for the control system, protecting the electronics from the elements and creating a solid mounting system. Not pictured above is the USB Xbox receiver, as it had broken.

While the robot itself is fantastic, I also appreciate the origin of the name. According to the brothers, "Hormes" is the Greek spirit of "putting oneself into action." Being no strangers to the project cycle, Richard says "I've started so many projects, and I swear I am going to finish this one." Perhaps my naming convention for projects has been my problem with finishing them all...

The Raitt brothers showed off Hormes at the FRC NASA/VCU Regional event in Richmond recently. They also plan to attend the Hampton Roads Mini Maker Faire in October. You can also find out more information about their robot here. We wish them the best of luck with the Hormes robot, and hope this has inspired you AVC contenders with some additional robot ideas!