A shake-up at GitHub highlights ongoing gender bias in the tech industry, prompting a response from SparkFun

The latest turn in an unfortunate story of tech industry gender politics has the Ada Initiative ending its partnership with GitHub. This comes in the wake of an independent investigation refuting claims of a hostile work environment for women and the resignation of co-founder, president, and former CEO of GitHub Tom Preston-Werner.

On March 14, 2014 Julie Ann Hovarth resigned after two years as a developer at GitHub. In doing so she described a hostile work environment engendered by Tom Preston-Werner and his wife Theresa. On April 21 the results of GitHub's independent investigation came out:

"The investigation found no evidence to support the claims against Tom and his wife of sexual or gender-based harassment or retaliation, or of a sexist or hostile work environment. However, while there may have been no legal wrongdoing, the investigator did find evidence of mistakes and errors of judgment."

With this was the revelation that Tom Preston-Werner was resigning. Shortly thereafter a major non-profit organization for supporting women in tech, the Ada Initiative, announced they were no longer partnering with GitHub.

TL;DR: nobody gained from this series of events and sexism is still a problem in the modern tech industry. 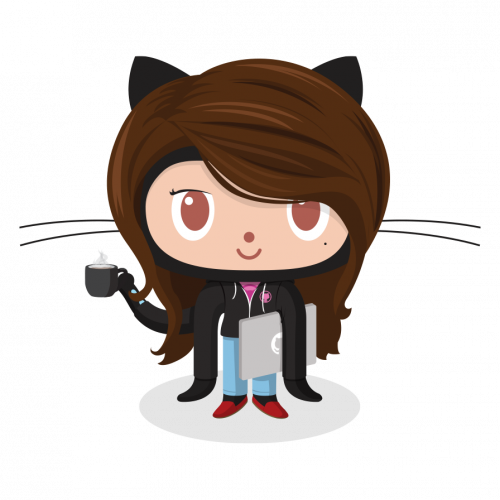 This hits home because SparkFun uses GitHub. A lot. In addition to over 200 public repositories (all public repos are free) $250 a month buys us all the private repos we need for new hardware and IT projects that aren't ready or appropriate to fully open source. The GitHub platform is a vital tool in development at SparkFun by choice. It's effective and people genuinely enjoy using it.

As the story unfolded this year it's been interesting to watch, never really knowing what the hell is going on. But now a part of GitHub's investigation results have resonated with some wisdom I gained this past year. Cultures of exclusion most often originate from countless tiny instances building to a strong headwind. Of course the investigation found no direct evidence – in other words nothing obvious. Individuals can contribute to this hostility in ways so subtle they honestly don't realize. Regardless whether anything blatant ever transpired the vague bit about mistakes and errors in judgment is the real problem that is not solved by one co-founder resigning. The culture needs to continue to evolve.

Last spring I completed a grueling round of hiring. Nine months saw 64 applicants trickle through. Only three of them (4.7%) were women but that was par for the course. I never had many women apply, but this time it was finally clear that a higher proportion of qualified women must be looking so my ability to interest them was the problem. In researching solutions one resource that pulled me in was the Geek Feminism Wiki. There are many good reads throughout that site and it's worth just poking around there for a while. In articles like Reducing Male Bias in Hiring I was able to not only pick up tips on conducting the process but gain a deeper understanding for why they work.

A new round of hiring arose in September. Rewriting the job post and seeking new job boards targeting more diverse groups produced better results: 65 applicants in only six weeks, 12% of whom were women, one of whom was an excellent fit for the position – a good step forward. Applicant quality was up across the board as twice as many warranted interviews. Lessons in balanced hiring improved all aspects of the process. Lessons like saying "Experience with X" instead of "Proficient with X", not listing the free beer as a perk (in addition to knowing the difference between a benefit and a perk), and a thousand other little things. 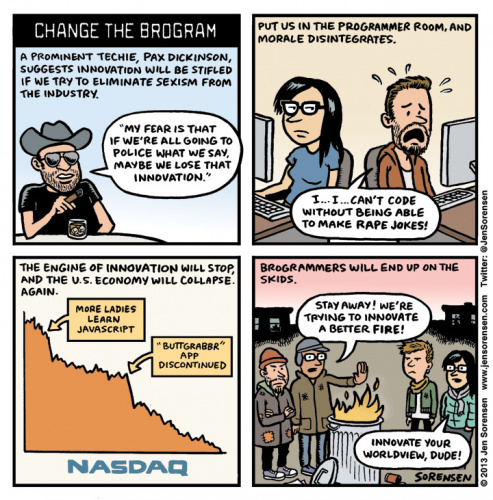 Jen Sorensen's take on brogrammer culture. Don't be that guy. <-

And that's the rub: the little things. Subtle little things that had been weighing down my job postings, perhaps hinting unbeknownst at a brogrammer culture lurking behind the trappings. I like to think SparkFun is an environment that's positive toward all the women that work here, but I can't speak to that point. I can only be an ally to the women with whom I work. Allies listen, learn, know they can't fix everything, but fix what they can.

This underscores the need for self-education in this arena. So many people in STEM can be hostile to women and minorities in ways they don't realize and can lack the empathy to listen when someone calls them on it. Even writing this blog post the irony of my own privilege is not lost on me. I'm a white dude writing about sexism and equality. I got where I am not just for my skills but my opportunities - opportunities I've been granted disproportionately because of my race and gender. To really level the playing field in a meaningful way those opportunities need to be accessible to everyone, and understanding how they're unfairly rationed today is the first step. So especially for privileged folks like me, reading ideas from another perspective can replace assumptions of integrity with enlightenment.

The Ada Initiative's decision to split from GitHub is appropriate. There are constructive reactions too that deserve attention, like the Culture Offset Pledge which encourages offsetting GitHub payments with targeted donations. SparkFun is now on board offsetting our GitHub subscriptions with an equal amount spread to the Ada Initiative, PHP Women, Black Girls Code, the National Center for Women in IT (NCWIT) and Girl Develop IT. This move seemed obvious as SparkFun has a history of promoting women in tech, but we can always do more.

As for GitHub, I truly hope their efforts to improve the work environment for all of their staff are sincere and effective. I hope they and the Ada Initiative will see fit to forge a new partnership some day, because they were doing good things together. Here in the Colorado front range too GitHub has been doing good things - local GitHub trainer Tim Berglund has conducted training sessions at SparkFun and several local groups focused on women in tech. I'm optimistic that GitHub can emerge from this dilemma as a fundamentally better company.

When I saw Coraline Ehmke (one of the creators of the Culture Offset Pledge) speak at Great Wide Open in Atlanta only a few weeks ago she discussed the flaws with the concept of the Meritocracy as GitHub began distancing themselves from the term. In an ideal world a meritocracy is terrific – those with the best contributions reap the most influence. In the real world meritocracies are skewed by privilege and influence is disproportionately meted out to those with the most opportunities – white men (like myself). The symbolic step GitHub's new CEO took in ditching the old tenet "United Meritocracy of GitHub" in favor of "In collaboration we trust" was the right one. Interestingly enough it was taken at Julie Ann Hovarth's suggestion mere weeks before she resigned. 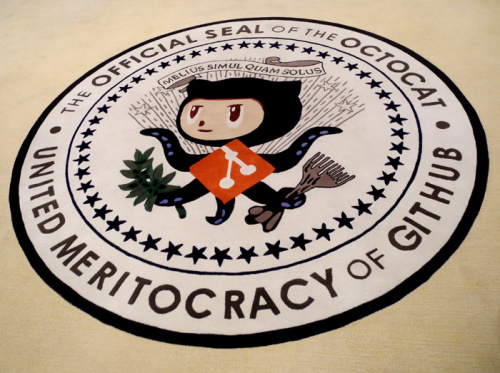 GitHub's former rug. The flawed "United Meritocracy of GitHub" has been supplanted by "In collaboration we trust" <-

If equality in the tech field is of interest to you then please take a look at just about any of the links in this blog post. Browse the Geek Feminism Wiki for a while. Call out insensitive behavior when you see it. Volunteer your time or money to any one of the many organizations out there working on this stuff. Our modern tech industry is a thriving landscape of opportunity and innovation – let's make sure it benefits everyone.

I also hope that all the organizations out there dedicated to educating women in tech thrive and expand and that SparkFun's contributions help in that. Ultimately it seems that long-standing biases in the tech industry will only die off if we support equal access for the current and next generations of coders - something every one of us can do every day.

The latest post from GitHub on the matter can be found here with greater detail about how the investigation was conducted and what it found. The original vague terminology was replaced with refreshingly explicit transparency - the kind GitHub is known for. It appears in this case the mistakes and errors of judgment were largely coming solely from Preston-Werner and the culture at GitHub is positive and supportive to the women who work there. This is exonerating for the company and certainly restores faith in their culture. The action prompted by the Culture Offset Pledge is still meaningful, though. While GitHub may have a good culture there are many places still that don't, and organizations working to improve equality in the tech industry still deserve support from individuals and companies determined to act.

It's Project Time: The Glowing ELastoLite Rabbit of Glory