Our newest hacker team is working remotely with us from Amsterdam to make a group-played instrument.

First - thank you to everyone who came out to the Boulder Reservoir for our sixth annual Autonomous Vehicle Competition on Saturday! It was definitely the best one yet, and we couldn't have done it without our awesome competitors and many curious spectators. Stay tuned for a recap video and photos coming soon!

For our latest round of sponsored geekery, we're trying something a little different: We're currently remotely "hosting" two hackers-in-non-residence in Amsterdam! Tom and Chris are the latest hackers to join us, and they're working on an awesome idea for a collaborative musical instrument. Because getting them in the studio for a portrait was out of the question, we had them submit some beautiful and extremely accurate self-portraits. 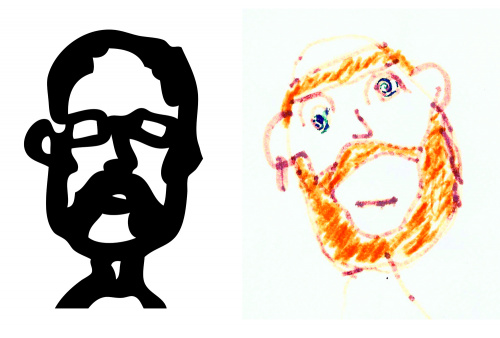 It's probably obvious, but Chris on the left and Tom is on the right.

Can you share your background, interests, and some favorite past projects? What and where is your current position/company?

Chris: My background is in embedded software engineering, and I have spent most of my career doing low-level hardware interfaces, device drivers and other things related to operating systems, as well as platforms for applications to run on. I currently work for a small startup in Amsterdam, NL, where I am developing a high-speed readout system for some x-ray sensitive CMOS sensors from CERN, and this readout system is probably my favorite project that I have ever worked on.

Tom: I began my professional career at the University of South Carolina as a music education student. There I learned that early music development looks a lot like early language development, and I began teaching toddlers to sing and chant in complicated tonalities and meters. Halfway through my education I spent a year studying Irish traditional music in Cork, Ireland. After completing my degree I acquired a position at Dubai American Academy as early childhood music teacher. After two years I moved to the high school, where I taught Digital Photography/Graphic Design, Web Design, Digital Video production and Flash Animation. Having little to no experience, I taught myself on the job and found that it whetted my appetite for an understanding of the role technology can or should play in education.

After three years in Dubai I moved to Amsterdam, and have been teaching music to 3-7 year olds at the American School of the Hague for the past five years. Having a particular interest in music and technology, I have been searching for authentic ways for young students to use technology when acquiring new musical skills and producing their own music creations. So far, my students have mixed recordings of themselves singing songs with loops in Garage Band. They have also improvised short rhythm patterns, recorded them and added loops in small groups using tablets. This year my grade 1 students and I also arranged an accompaniment of "Ob-La-Di, Ob-La-Da" for the 4th grade choir concert using Garage Band and an interactive whiteboard.

Last year I began a Master of Education Technology with Michigan State University. My favorite projects involved the MaKey MaKey and designing music interfaces for performing songs using a variety of materials. I have experimented with students this year and plan on making it a bigger part of my curriculum next year.

Chris: I was talking to my friend Tom - who teaches music to children - about how funny it would be to create an instrument that kids could play by "punching the air." Then about two or three days later I was on sparkfun.com and I saw a post for one of the first hackers-in-residence and I thought, "I could actually build this instrument with help from SparkFun!" Prior to this I never seriously considered actually building the thing. Indeed the hacker program is quite valuable because I haven't really started working on this project yet, but I have already learned quite a bit about midi and music. So it is a great educational opportunity for me, and when I am done the plan is to donate the whole thing to Tom's school so maybe others will be able to benefit from it as well.

Tom: I was showing my buddy Chris some of my experiments with the MaKey MaKey from my Master in Education Technology coursework last summer, and we began discussing how cool it would be to create an instrument where the interface is invisible. We got a kick out of imagining kids punching the air to create music. A couple of weeks later Chris let me know that he had applied to be a hacker-in-residence and the rest is history!

Programs like this help us to explore the limits of technology and find new ways of producing live media. As an educator I hope to find new ways to bring musical experience to children. I will learn much myself as I gain a "behind the scenes" understanding of programming, and help articulate what the instrument can and can't do.

Tom and his MaKey MaKey Banana Band in action

What is the project you'll be working on at SparkFun, and how long will you be working with us? Why did you choose this project?

Tom and Chris: We plan on building a musical instrument using eight infrared sensors that will be played by four to eight individuals. The sensors will be connected to an Arduino, a midi module and a powered speaker. The sensors may be programmed to play specific notes, a limited range of notes (pentatonic scale for example), or unarticulated pitch like the theremin. They may also be programmed to trigger different effects and controls like volume, panning, or reverb - the basic idea is that by moving your hands in front of the sensors, you control sound. We plan on first creating the instrument and testing it with several other musicians. We will tweak the instrument with the end goal of creating something simple and accessible; something that could, for example, be used successfully in a classroom.

If you could have any super power, what would it be? What is your favorite food?

Chris: As far a super power, I have to go with time travel - just think of all the cool people you could meet. My favorite food is easily the various kinds of slow-cooked meats from the southeast US called BBQ.

Tom: My super power would be to eat as much food as I would like without ever getting full or throwing up. That food would be the regional delicacies of Mexico. Bring on the mole!

Thanks guys, we're looking forward to seeing the results, and forming the next SparkFun band with your project.