The Game of Internet Preservation

Net neutrality and the open internet: why it's important, how it's at risk today, and what you can do about it right now.

I felt a great disturbance in the Force, as if millions of voices suddenly cried out in terror and were suddenly silenced. I fear something terrible has happened.

Okay, so having your home planet obliterated is not quite the same as having your internet co-opted by a greedy oligopoly of internet service providers. It would not be hyperbolic, however, to say that 2014 may be the most pivotal year in the Internet's history.

I. Introduction to the Game and big moves thus far

The Game that's been playing out this year has three big players:

At stake is the openness of the internet, also referred to as net neutrality. This is the concept that all data on the internet is created equal and should be treated equally as it moves around the internet. Here's a relevant play-by-play so far:

And that brings us up to speed.

II. Why we're even playing the Game

Why is this important? In a nutshell: the technology that makes the internet go was designed with openness and neutrality firmly in mind. Every protocol at every layer makes no distinction about the content of the messages it handles, nor does any protocol discretely allow for varying the performance of communication based on arbitrary rules like where data comes from or to where it's going.

Why is that a good thing? To give a simple example, it means that Facebook and Twitter are served up at the same speed by your ISP. Flash back to 2005 when MySpace was the dominant social media site with millions of users and tiny Facebook was growing fast. If both companies had to pay extra to the ISPs to be "in the fast lane" then MySpace could buy their way to a faster internet that Facebook couldn't afford. Facebook could not compete with MySpace purely on the merits of the service and could land in a catch-22: needing money to pay for more visitors, needing more visitors to make more money.

This type of playing field could have kept Facebook to the backwaters of the Internet and MySpace could still be dominant today. As history has shown, at equal speeds hundreds of millions of people instead voted with their clicks for what they considered to be the better service, and regardless of your preference the competition was fair. Without net neutrality success on the internet isn't just how good your site is, it's also how much money you can bring to the table.

Thankfully today's internet doesn't work like that. A new tiny company can unseat a behemoth purely by being better. That's the kind of thing that keeps pushing stuff on the internet to crazy levels of awesome (and fast). This is largely irrelevant to the big telecoms that sling the bits around unless they're allowed to get more "creative" with their pricing models:

Clearly telecoms would love this! So many new things that internet users just get today for paying a monthly rate for a universal connection speed for all types of data could be diced up countless ways. These promotions would almost certainly be optimized to boost ISP profits and bolster the performance (and therefore prominence) of content providers that partner with ISPs.

So that's why the ISPs are playing, and it's also why us internet users are effectively forced to play this Game.

III. Game strategy and next moves

There are three things you can do right now to contribute to the next move with your fellow internet users.

Most important: continue piling up comments to the FCC about this. Over 1.1 million comments have been amassed so far—less than 0.35% of total US population—and as that number grows it speaks louder.

Directly email your thoughts to openinternet@fcc.gov

Fill out the guided form at dearfcc.org

File your comment directly on fcc.gov: Proceeding 14-28: Protecting and Promoting the Open Internet

When contacting the FCC remember that being polite, honest, and respectful will be most effective. Don't be a troll.

There have been stories circulating recently describing how the FCC doesn't really care about comments from individuals like you and me anyway, if history is any guide. That's disheartening but it's still important to comment and get others to comment! Why? Janet Jackson.

In 2004, at the Superbowl XXXVIII half time show, Janet Jackson broadcast the famous wardrobe malfunction. Soon after 1.4 million complaints had piled up at the FCC, setting the all-time record for volume of input from the US public. While it's a bit of an apples-to-oranges comparison between 2004's spontaneous broadcast event and 2014's methodical rule change it still makes a bold statement about the relative priorities of the US public. The FCC can ignore 1.5 million comments just as easily as 1.1 million, but maybe it's time for backlash against efforts to subvert humankind's greatest platform for free expression to unseat offense at a split-second of nudity from holding the top spot.

Congress just started a five week recess but your representatives in congress always want to hear from you. While no work advancing legislation will happen until the fall there's actually something each house member and each senator can do, for you, today. One of them already did it.

Last week Senator Patrick Leahy of Vermont publicly called on the FCC to hold more round table sessions about the open internet outside of Washington D.C.. I think this a terrific idea, and contacted my representative and both of my senators requesting they do they same. Here's what I said:

The FCC recently announced it will hold public round table meetings on net neutrality and the open internet from September 16 - October 7 in Washington. Senator Leahy of Vermont has wisely called on the FCC to hold round tables all around the country to get a better sampling of wider public opinion.

Please join Senator Leahy in calling on the FCC to expand the geographical footprint of its round table sessions. I strongly favor net neutrality and the open internet and I fear that the 1.1 million comments filed urging the FCC to preserve them will go unnoticed. I want to appear in person to tell the FCC that net neutrality and the open internet are critical to preserve the free speech and free markets built into the structure of the internet for all internet users in Colorado, our nation, and the world.

If you would like the FCC to seek opinion on this matter from the people in your state, contact your representatives and tell them! Their job is to use their influence to represent you, and not just by writing laws. You can also contact Senator Leahy even if you're not from Vermont thanking him for being the first congressman to make that proposal.

Think globally, act locally. Educate your friends, family, and neighbors about net neutrality, the open internet, why it's important, how it's at risk, and what they can do about it.

All summer long SparkFun has been dropping these stickers in domestic (US) orders: 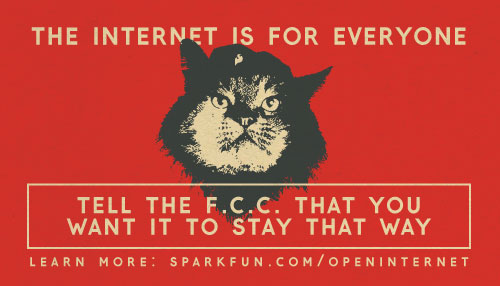 And they refer people to a page we put together just for this issue: sparkfun.com/openinternet. As the Game evolves and moves are made and the rules change this page will keep things current.

SparkFun recognizes we may not exist in our current form if the rules of the internet were back in 2003 what they could be in 2015. We're also staunchly dedicated to the principles of open source and the importance of internet user privacy, so it's only right that we firmly establish our position in this game. And, having a website that gets a decent amount of traffic, it's our responsibility to encourage others—all of you—to know about the Game and how to play it.

My inner cynic tells me this is an unfair game that we're all playing whether we like it or not. My inner optimist tells me there are practical ways to win this game. My inner realist tells me we already won when we built an open internet, but the game is never over, and victories are never permanent.

You can choose to do nothing about this, but you've already done something by reading this far. In the run up to September 10th you may see more stuff about this in the media, and during the FCC round tables (scheduled now for September 16 through October 7) you may see even more. Don't ignore it! Watch the public round table streams. Stay informed and inform others.

Whenever the people are well informed, they can be trusted with their own government; that whenever things get so far wrong as to attract their notice, they may be relied on to set them to rights.