Examining one of the categories that occupies significant space on my workbench: wire strippers.

As I threatened last spring, I have a lot of different sets of wire strippers hanging around, and I'm going to do some show-and-tell about them here today. Having done a lot of wiring-intensive work (like wiring up recording studios), I eventually found that having good tools makes the task much easier, and improves the overall quality of the work.

We'll run somewhat chronologically through my collection here. It's interesting to note that they're organized in order of acquisition, but that also matches (more or less) how expensive they are. Like many hobbies and careers, as I got deeper into electronics, I found I needed tools of higher quality, with more specialized application.

This is my oldest set of wire strippers. 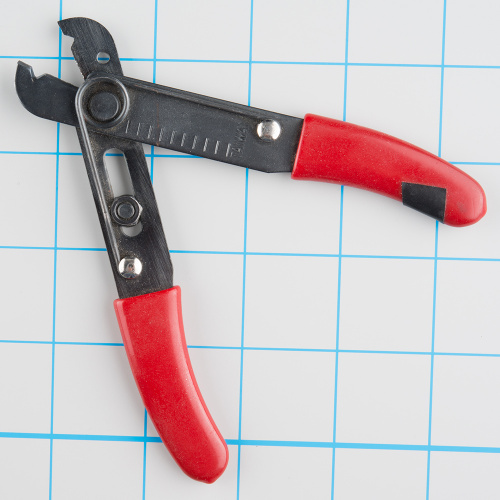 They're more a source of frustration than of elegantly stripped wires.

As we discuss in the Working with Wire tutorial, when you strip wire, you want to remove the insulation, but leave the wire underneath intact. You don't want to nick the copper, which weakens the wire - eventually it will fatigue and snap, right where it got nicked. If you're working with very fine stranded wire, it might also leave a little fuzz of strands at the end of the insulation, which could lead to short circuits. So the most important thing wire strippers can do is cut insulation, and leave the wire unscathed. These strippers fall down on that point.

To casually inspect them, they look like a good idea - the set screw in the slot should allow you to set the gauge of wire to strip...but it isn't meaningfully calibrated. Trying to set it involves testing it a bunch of times. Then, once it's set, the set screw slips, and always down the handles, so the opening gets smaller, inviting them to nick the copper.

The other major problem is that the hole in the jaws is square. We're stripping round wire with a square hole, again likely to nick the underlying copper.

There's a timeframe early in my project history where the primary failure mode is directly tractable to the exact pair of wire strippers pictured above.

After wrestling with the cheapies for way too long, I upgraded to a real wire stripper - the ones that look like a pair of pliers with a set of graduated holes for different gauges. 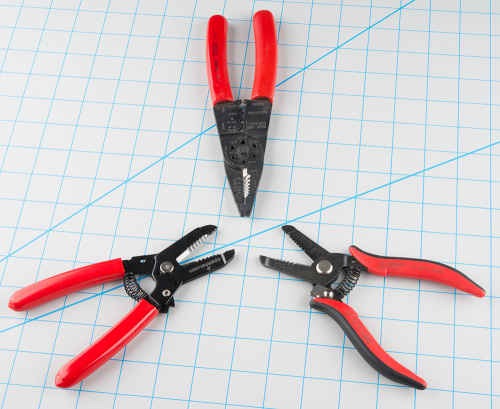 Here are three examples of regular wire strippers, including the ones that replaced the cheapies, plus our SparkFun-branded ones, and our somewhat nicer Hakko strippers.

They're the ones I'll reach for for general purpose work, such as dealing with hookup wire.

Functionally, these are all very similar. The things that makes them more useful than the cheap ones:

I'd imagine that these meet the needs of the average electronics student or hobbyist. But to explore the topic more completely, I'm going to pull up a few more esoteric sets.

The general purpose strippers above are good on my electronics workbench for day-to-day prototyping needs. But they're somewhat limited - for example, the Hakko's are sized for 20 to 30 ga wire. If I'm working with larger wire, or fancier wire like sheathed multipair audio or control cable, they're not always a good fit.

In north America, household AC wiring is done with a bundled cable that's sold under the brand name Romex. It has three conductors (hot, neutral and ground) arranged side-by-side in a common sheath, with an oblong profile. It's most commonly available in solid-core 12 and 14 AWG.

It's larger than anything on my electronics workbench, and the strippers shown above aren't terribly effective for it. Even if they could handle 12 or 14 ga cable, removing the outer jacket just to get to the inner wires is pretty tedious. It calls for it's own special tools. 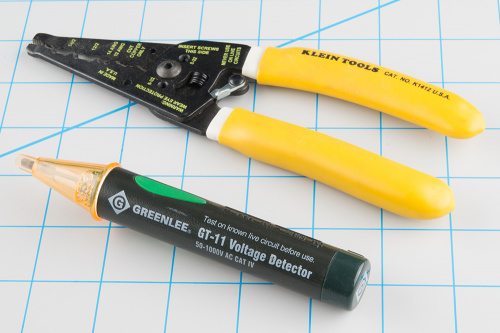 This Klein stripper is made specifically for handling Romex. It is features a two-step stripping process. The first step uses dumbbell shaped holes that remove the jacket, but leave the inner conductor insulation intact. Once the jacket is removed, it has single 12 and 14 AWG sized round holes to strip the inner conductors.

The handles also appear to be double coated - this is to make the handles more comfortable to grip - don't confuse it with being insulated against electrical shock! Klein themselves state:

NOT insulated. Plastic-dipped or slip-on plastic handles are NOT intended for protection against electrical shock.

For safety's sake, don't work on live circuits. Shut off the breaker, and as a double-precaution, use a live-wire detector, as shown above, to make sure it's off. And as a triple precaution, check the live wire detector on an actual live circuit, just in case the batteries are dead!

In wiring up recording studios, a lot of the wiring is often custom fabricated on site. It usually involves many lengths of multipair cable, such as Redco TGS or Mogami Snake Cable.

Working with these requires several layers of stripping.

The outer layer is almost like garden hose, and can be removed carefully with a razor blade.

Inside that are a number of pairs of cables, each about 3/16" thick. To strip the pairs without damaging the interior wire, I use a thermal stripper. 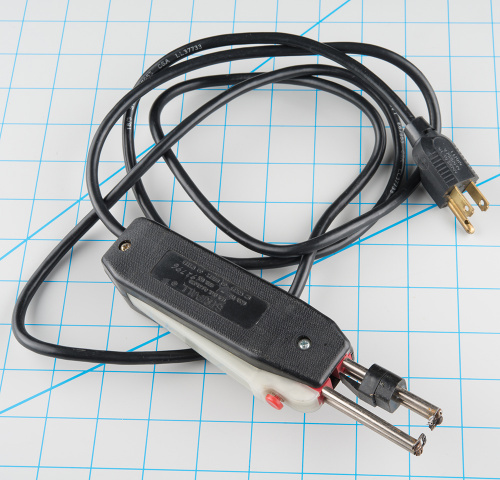 This is a Teledyne Stripall. When you press the red button, the blades on the end heat up, to melt through the insulaton. You heat them up, then pinch and twist, and the insulation comes right off. The blades themselves are blunt - there are no sharp edges to scar the internal conductors.

The Teledynes aren't the only thermal stripper around, they're just the set I have on my bench. Patco Inc make a similar hand-held stripper with a single, fixed, v-shaped blade, and Hakko make a set with a lightweight handle tied to a base station, similar to their soldering stations.

It seems like some tools have a life of their own. They wander around, and they're never where I remember using them last. My little co-ax stripper seems to be bashful, and didn't make it to the photoshoot. I'll try to describe it, instead - it's essentially a razor blade with some depth stops, and a loop for your finger. You insert the cable into a notch, then spin the stripper around the cable, so the razor can cut the jacket.

You can find them at the hardware store - they're usually found with the cable TV parts - and possibly included for free in the box if you buy a whole spool of 75 Ohm cable!

Simple ones just have a set of different depth stops molded into the plastic - you put the wire into the notch that cuts the insulation, but not the conductor. There are different ones for different types of wire - RG-6 or RG-59 TV Cable being the most common. Fancier ones have adjustable depth stops, and even fancier ones have multiple blades that can strip the outer jacket and inner insulation all at once, neatly measured to fit a crimp-on connector.

The adjustable ones are also useful for other types of cable, including audio and instrumentation cable.

Once the jacket on an audio snake cable has been removed, and the second layer on the pair stripped, the individual wires need to be stripped. The underlying wire is really fine - TGS is stranded 26 AWG, composed of 40 strands of 30 AWG. If you're even a little overzealous with the strippers, the inner conductors are severed, making coppery angelhair on your workbench. It calls for a more precise tool. 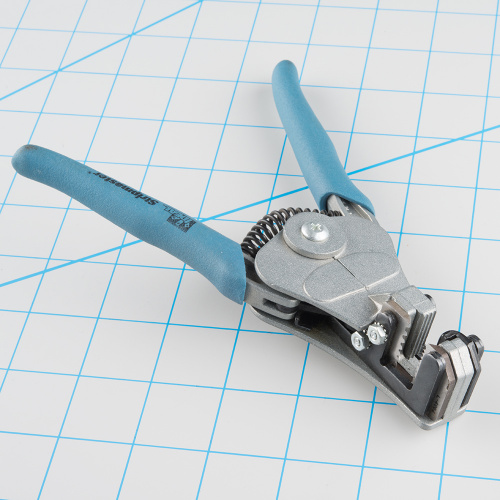 This is an Ideal Industries Stripmaster. The business end has replaceable blades that look somewhat like the the graduated holes in the regular wire strippers, but the overall mechanism makes them more precise.

There are actually several mechanisms in these strippers, all actuated by squeezing the handles.

It sounds like a lot of detail to be aware of - but in practice, it's all done in the blink of an eye.

There are a few of things to be aware of if you're using a Stripmaster.

First, if you're using one of these, and it's smashing the stripped wire when you release the handles, make sure that you're squeezing the handles completely - if you don't complete the cycle, the lever that opens the clamp before the jaws close won't catch. It's one of those situations where trying to take a shortcut really doesn't pay off.

Second, if you're seeking out one of these strippers, it's important to note that they're sold with blades suited to different wire sizes. The average hardware store will have blades for household wiring, in the 10 to 16 AWG range. But those aren't the only blades. The set shown above have 20 to 30 AWG blades, perfect for small electronics work, and there are other sizes in between, including blades specifically made for RG-6 and RG-59. The blades are interchangeable and sold separately, so you could reconfigure one set for different wire by swapping blades.

Finally, the action of the stripper can cause the machine screws that hold the blades to loosen, and the blades can become misaligned. You'll want to remember to tighten them periodically, or hit them with a dot of Loctite.

These are just the wire strippers I use on a regular basis, and not an exhaustive listing. I'm sure I've missed someones favorites - perhaps even tools that I'd find handy. What are your favorite wire strippers?

He's Back! "According to Pete" Takes On Differential Pairs