Return of the Turbine!

The third installment of the ongoing jet engine build, where we have ignition, and Luke finally confronts his jerk dad.

Now that robot season has finally slowed down, I have a little more time to give the turbine some much needed attention. It now has something that resembles an electrical system. It is still pretty crude but there is enough to see if this puppy will make fire! 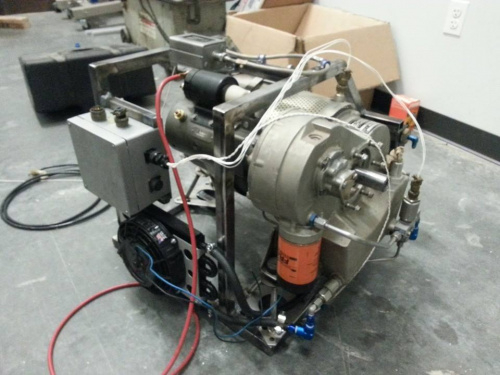 For now I am simply controlling each component manually with a serial terminal. Once I prove everything is working I will begin coding the actual control system. Here is a basic block diagram of what I am trying to control with an Arduino Pro Mini I have been having difficulties getting the engine to light. From rusted fuel pumps to sticky valves, I have been having a heck of a time getting all the cobwebs out of this beast. Initially I tried to run the engine off kerosene and two small aircraft batteries. The batteries didn't have the juice and I made a nice kerosene puddle out back. To make things easier on myself I'm tried to start the engine off propane. It's only slightly sketchy (thats how I explained it to our new facilities manager). I also got some huge batteries to quench its insatiable thrist for current.

Here is a quick video of our startup attempt and a quick tour of the engine (spoiler, it went well). We got the engine to self sustain a burn but my propane rig just isn't big enough to bing it up to full power.

Next step: Get it running on kerosene. Then, likely get a noise complaint ticket soon after.

My Email is my Passport; Verify Me