Combat robots are cool and you can build your own. Check out this 3-part video series on how to build one yourself!

Relevant Public Service Announcement: The call for makers for NoCo Mini Maker Faire closes at the end of the day today, so get your applications in and we'll see you there next month!

Robots are cool. I tend to like robotics for the same reason LEDs are so popular; you get to see something happen when you power up your project. Sure, posting data to the Internet is cool and all the rage these days, but seeing something move under your control is really neat. Also, when you get to see your newest creation break stuff, that's REALLY fun. 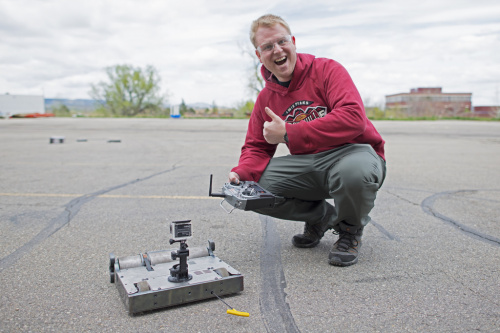 Combat robots are more than just just mindless destruction though. One of the things I like about them is the design challenge. Everything has to work perfectly AND under extreme conditions. It's one thing to get something moving, but to do so while something is trying to destroy YOUR robot adds another level of complexity to the design. Additionally, when you show up to an event, you have no idea what you'll be going against. Sure, they'll be the same weight, but you have no idea what weapon they might have, how fast they'll be, or what crazy armor configuration they'll use. You need to design for the unknown. 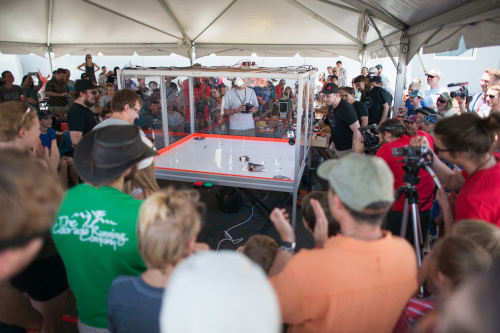 Last year, Casey tricked me into building a combat robot. I say 'tricked' because once I built one I got hooked. We even incorporated the competition at the last SparkFun AVC. After AVC, I decided to create a small series of videos showing the basics of building a small combat robot. I'd love to see more people building them and competing around the country. Starting small is the way to go; you learn a lot and you don't have to spend a ton of money doing so.

The first part of my video series is concerned with the design. I chose a spinning drum, mostly because that's what I had seen work with Casey's larger 60-lb robot (shown above). Start with what you know. The robot's name is Sgt. Cuddles and he just wants a hug. Cuddles competed at RoboGames 2015 in San Mateo.

When you build a robot, you have a big choice to make. You can go for offensive, or defensive. Weapon or wedge. This is the choice all combat robot builders make. Build a weapon, and you get to see parts fly. Build a wedge, and you most likely have a better chance of winning. I went with a weapon, because wedges aren't any fun. Part 2 focuses on the spinning drum.

Lastly, the electronics. This is the part everyone's probably most interested in. Before I built Cuddles, I hadn't really done much with RC before. I had never seen inside a combat robot and didn't really know what made them run. After doing a bit of research I found that it's actually pretty easy to piece one together. Having it do well in a competition is another story though...

Now that you're all amped up to build a robot, you might be wondering where you can compete! We have good news for you. The same arena that was at this year's AVC will be at NoCo Mini Maker Faire, October 10th and 11th. I will be building a new 3LB robot for the competition. Be sure to susbribe to my channel for more robot videos and other stuff. Also, if you have any questions, post a comment. Now get building!

IoT video series - The Fellowship of the Things: Episode 2