Rise of the Open Source Criminal

What happens when people do bad things with good tech?

On October 31st, 2015, Russian Metrojet Flight 9268 crashed in northern Sinai killing all 224 passengers and crew. A week into the investigation, Egyptian authorities claimed that the aircraft had been destroyed by an on-board explosion. Meanwhile, American news outlet CNN was speculating about what kind of device might have been used to trigger the explosion. During one of these breaking news segments, CNN used a (properly credited) image from Adafruit depicting their BMP180 Barometric Pressure Sensor breakout board. It's probably safe to say that most of the CNN audience didn't recognize the device or the associated brand, but those who did quickly took to the net with varying opinions:

...to the downright reasonable:

(Thanks to all the Redditors on /r/electronics!)

I'm not sure how our friends over at Adafruit feel about the publicity, but I imagine it hasn't hurt their reputation. The truth is that it speaks positively to their search ranking and their relationship with the media that their image found its way to the breaking news production folks. And at the end of the day we sympathize with Adafruit regarding how people use their images. After all, that CNN segment didn't have to look like this: 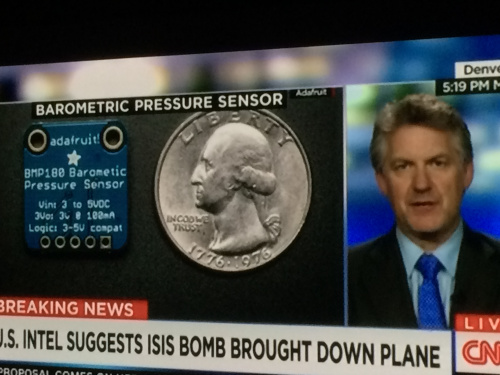 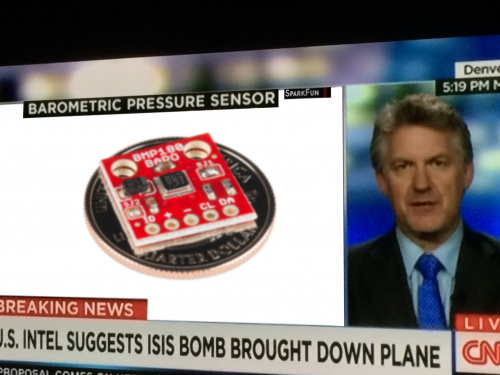 But this isn't the first time we've seen Open Source Hardware hit the spotlight in a less-than-flattering way. Some of you will remember this SparkFun Spotlight: 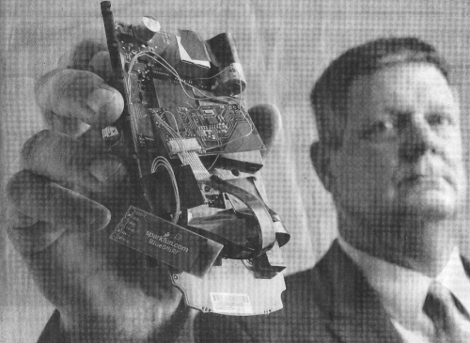 ...wherein our logo sat front-and-center in this card skimming story. Apparently, some enterprising young thug in Canada had wired one of our BlueSMiRF bluetooth modems into the UART of a point-of-sale PIN pad. But crime doesn't just happen in the real world. Case in point, this awesome screenshot from CSI:Cyber Season 2 Episode 6: 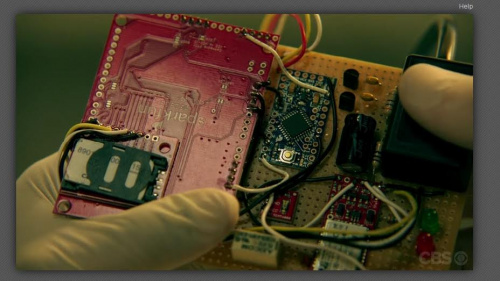 "Check this out: an open-source microcontroller connected to the car's OBD-II. This has gotta be our hacker!"

...wherein an awesomely red collection of proto-boards were used to remote-control a car (an application which apparently requires a light sensor?) into oncoming traffic. I was going to break down this prop piece-by-piece but then I remembered that this is the show that brought us such scripting gems as, “She’s downloading the computer.”

Now, obviously I'm not comparing a fictional case of remote carjacking to a real life case of airborne terrorism... but taken as a whole, these disparate case studies raise an important question about how technology is portrayed in the media. Are occurrences like this actually a symptom of technophobia? Are we, as a community, too quick to call foul? Probably yes on both accounts.

There is measurable technophobia in popular culture, and with good reason. Ubiquitous computing and communication technologies are the bread and butter of the modern surveillance state. A healthy sense of trepidation about putting computers in our everything is probably the mark of a good 21st century citizen. Shows like CSI:Cyber sensationalize these healthy fears in a way that strikes most of us as out of touch, and it's pretty easy to dismiss during CBS primetime. But what about during the nightly news?

Actually it turns out that the 24-hour news cycle has turned breaking news pieces like this into a fleeting blur in our memories. Technophobia is as old as technology and it isn't likely to go away any time soon. What's more, I can remember a time when you wouldn't see a picture of a pressure sensor in the news because it was either too technical for the public to understand or not sexy enough to be worth it. I can say with confidence SparkFun, Adafruit, and our other friends in the market have made a big change in both of factors.

When it seems like open-source or DIY electronics are being misrepresented "in the media," keep these two things in mind:

These days, people tend to throw around the word "misrepresentation" when it comes to the portrayal of a culture or a concept in the media. Ironically, using the word "misrepresentation" actually, well, misrepresents the intentions of these various media outlets. To use contract law parlance, misrepresentation comes in three flavors: fraudulent, negligent, and innocent. It's easy to see one of Adafruit's products on screen with a lot of scary words and interpret it as a form of fraudulent misrepresentation. Often, though, the media is negligent at worst. Most of the time, the media (the news media especially) succumbs to innocent reductionism. Their representation of most complex issues is definitely biased in many cases, but it's also usually too thin to be malicious. There simply isn't time for a balanced and nuanced explanation during every segment.

2) There is a lot of pro-technology hype in the media:

For every movie, TV show, or news story about hackers kidnapping your grandma over the interwebs there are probably 50 stories about some technology that's going to "disrupt" the "innovation" market out of the water. This is the type of story telling that we've chosen to value as a culture and until that changes, it's irresponsible to forget the rabid enthusiasm whenever we're faced with fearful hand-wringing.

So why do people get up-in-arms every time we see something like Adafruit's free advertising on CNN? Well, I think it's the same reason we complain about a lot of things in life: We want to express ourselves. This is why every complaint (about your job, or your friends, or your life) and every social grievance (about a celebrity faux pas or a piece of politically-incorrect speech) should be taken with a grain of salt. Often, we complain because it's part of our process, not because there's something actually wrong. Many of the folks who are outraged about CNN using Adafruit's image are really just acknowledging that they recognize the Adafruit logo and want some recognition that they're part of the in-group. And this is good news, because it means that technology, DIY and open-source aren't so much "under attack" as they are "misunderstood," and being in the business of education, we're well positioned to deal with that.

Why we're excited about IoT