For this Tech Talk Tuesday, I present you with an ASCII table.

In a previous Tech Talk Tuesday post, I mentioned that I would try to focus on concepts for my posts, and this week, I plan to deliver.

The American Standard Code for Information Interchange (ASCII) is a character encoding set created in the 1960s by the American Standards Association (ASA), which is now the American National Standards Institute (ANSI). ASCII was one of the first character encoding sets to be created and used for computers, and quickly gained popularity when President Lyndon B. Johnson mandated that all federal government computers support ASCII.

Example of an ASCII-encoded text file

To read more about ASCII and view the full ASCII table, see the tutorial below:

A brief history of how ASCII came to be, how it's useful to computers, and some helpful tables to convert numbers to characters.
Favorited Favorite 28

While there are plenty of ASCII tables on the 'net, I figured I could be slightly more useful by offering an image version of the table to do with as you please. 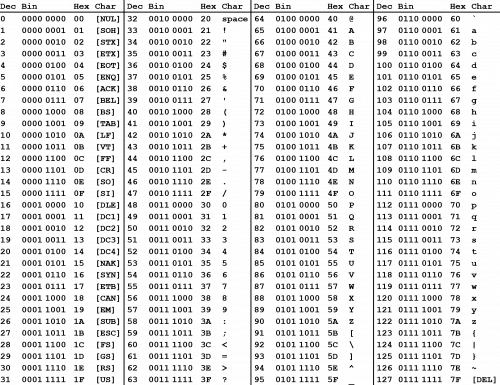 You can download black and white versions of the image in this ASCII table pack:

With these, you are welcome to print them out, frame them above your monitor, print them on a coffee mug to show your love of American computing history or, for a more useful approach, have it printed onto a custom mouse pad.

Final fun fact of the day: ASCII was the most popular character encoding for web pages until December 2007, when it was surpassed by UTF-8 which, interestingly enough, is backwards compatible with ASCII.