My first few blog posts of the new year will focus on the high-tech tools that might assist in keeping some classic New Year's resolutions. Today we'll look at the technology behind e-cigs, vapes and other vapor-based smoking cessation solutions!

Also, some of the things I'll talk about here are dangerous. Please don't use e-cigarettes if you're under the age of 18 and even then, we don't recommend using nicotine at all. All experiments here were performed with non-nicotine vape juice.

It's a tale as old as time: "This year is the year I quit smoking."

According to Statistic Brain, it's the fourth most common New Year's resolution, and with good reason! I'll spare you the grisly statistics (of which we are all aware), but smoking is really bad news. Because of the addictive quality of nicotine (and, by extension, tobacco) it can be a formidable challenge to stop smoking. Many products have been designed and marketed to improve the success rate. Nicotine patches and gum attack the neurochemical cause of addiction by helping smokers slowly reduce the amount of nicotine they're exposed to. Nicotine inhalers deliver nicotine and reduce exposure to the combustion products of smoking, but also help to satisfy the physical habit. These traditional smoking cessation products have worked to varying degrees for different people, but by far the most common today appears to be e-cigarettes.

The use of e-cigarettes, or "vaping," has enjoyed a meteoric (if controversial) rise in popularity, both as a smoking cessation practice and as a hobby. By some reports, the industry has grown from $20 million in 2008 to over $2.5 billion in 2015. The science on whether or not vaping is a healthy habit is still being done, but it seems likely that it's considerably less harmful than smoking --- thus the appeal. Besides being a potentially less harmful alternative to smoking, it's also the kind of hobby that appeals to techies and gear nerds. It may seem like an e-cig is an e-cig, so what's to geek out about, right? Well, it turns out there's more going on here than you might expect. I took the company credit card to the local smokeshop/vapeshop/what-even-is-that-shop to see what I could learn...

The Basics of Vaping

There are a wide range of devices that people use to "vape," but they all work in basically the same way. A piece of wire is wrapped around a wicking material soaked in the vaping solution. A current is applied to the wire, and it heats up, boiling the solution off into a fine vapor. The solution (sometimes called "e-liquid" or "juice") is composed largely of propylene glycol and/or vegetable glycerin. These are the same ingredients used in some theatrical fog/smoke machines, because the vapors that they produce are thick and persistent. The glycerol base is flavored with food-grade flavoring agents, and nicotine is added to varying levels depending on the user's preference. 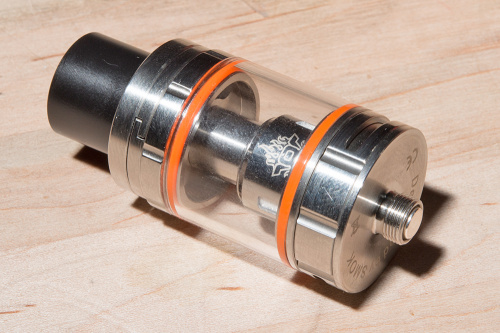 Generally speaking, the term "e-cig" refers to a device that looks like a traditional cigarette. The coil and wick (collectively known as the atomizer) in this type of device are usually built into a replaceable cartridge, which is sometimes pre-soaked with juice. Devices that are referred to as "vapes" generally use a tank system. The tank is a refillable container of juice into which the wick is submerged. This allows the user to vape longer without having to buy new cartridges; they simply need to refill the tank. The coils will eventually wear out, though, and many of these systems allow for quick replacement of pre-built coils. Finally, "mods" are devices that bear almost no resemblance to traditional cigarettes or pipes whatsoever. These are the devices we'll experiment with today because they're often the most electrically interesting...

Mod boxes come in various shapes, sizes and types, but they basically break down into two camps: regulated mods and unregulated (or "mechanical") mods. Regulated mods are essentially pocket-sized, variable-voltage power supplies. They're designed to drive very low-resistance heating elements so they can dump several amps from the internal battery. Regulated supplies allow the user to control the amount of power being applied to the coil (usually in the range of 5--100W, but sometimes higher) and limit the draw from the battery. Many regulated supplies even offer battery cell protection against over/undervoltage and fast discharge. Mechanical mods, on the other hand, are essentially a battery on a switch. An unprotected lithium cell is placed in series with a momentary switch and a heating coil, and sometimes a fuse is added for (minimal) protection. These are usually the rigs that you see on the news exploding in people's hands, because they allow the user to over-tax the battery to a dangerous degree, and when lithium batteries fail, they do so spectacularly.

So why do people build dangerous mods? Well, sometimes it's because building a regulated mod is harder to do, and sometimes it's just because building a regulated supply for the power levels they want would be expensive and impractical. Either way, it's usually in service to the craft of "cloud-chasing," or blowing the biggest, thickest cloud of vapor that you can. It takes a lot of power to flash-boil glycerol! Whereas normal vaping takes between 5 and 15W of power, cloud-chasers will build mods capable of dumping 250W or more across the coil. As you can imagine, this is bad for all sorts of reasons, including:

There are all kinds of reasons not to push the limits on vaping, but those people exist in any hobby, I suppose.

As it turns out, the vaping community has an intimate connection with Ohm's law. Because they're concerned with dropping a lot of power across a fixed resistance, Ohm's law is basically the vaper's bible. For example, one of the mods I procured has an OLED screen that displays the current power setting, the resistance of the coil and the voltage applied during use. With a 1.84Ω coil installed and the power set to 15W, the displayed voltage is 5.25V. If you just did the math in your head, you should have noticed the following:

Which means that my mod is applying about 2.8A of current across the coil. Once you understand this relationship --- and the fact that batteries have safe and unsafe discharge rates --- you start to see the importance of choosing your batteries and coils carefully. For instance, let's examine the other tank that I picked up: 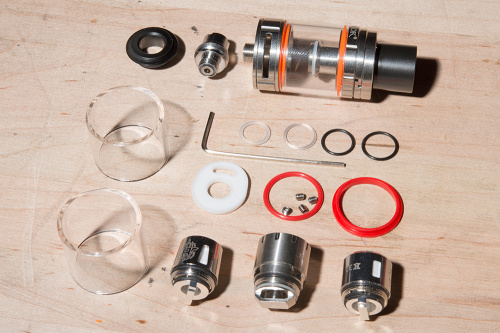 Look at all the machined steel and glass you get for $50! Way to go, China!

This tank comes with a few different pre-built coils, so I picked one at random and decided to test it on the multimeter. The coil assembly had the following etched into the side:

This is a Sub-Ohm coil! These coils are usually used by cloud-chasers and advanced vapers because they can dump a lot more power from a fixed-voltage device, like a mechanical mod. Let's check that resistance value: 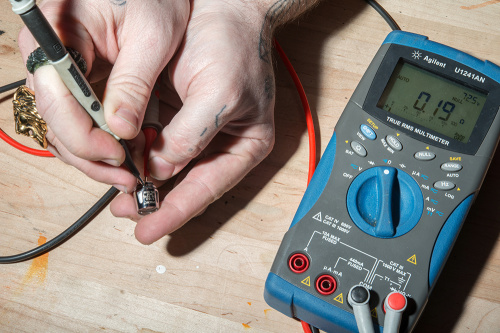 This could be easier.

After nulling out the resistance of the leads, this meter is reading 0.19Ω, which I expect is due to the resistance of the steel cartridge body and difficulty of getting a good connection against the threads. A measurement of the higher-resistance coil from the other rig corroborates what the mod itself measured (1.84Ω).

Well, you should have noticed that the current values in these two equations (while not shown) are radically different. A lower resistance coil allows a lot more current to flow. In the first scenario, our lithium cell was only sourcing 2A, but in the second scenario that number jumps to 18.5A! If you actually wanted to build this mod, Ohm's Law might save your life because now you know what the discharge rating of your battery should be. Assuming our 18650 battery has a capacity of 2600mAh, it might slide by on a discharge rate of 1C while powering the 1.84Ω coil. The same battery would need to have a discharge rate of at least 8C (you probably want it rated to at least 10C).

It takes so much current to heat up a low-resistance coil that I had trouble digging up a bench supply to do it. Eventually, I ended up connecting a 350W MeanWell power supply and was able to make vapor. The supply maxes out at about 14A, so it was not happy. Doing the math, it was only able to push about 2V down the line and was hitting its current limit. 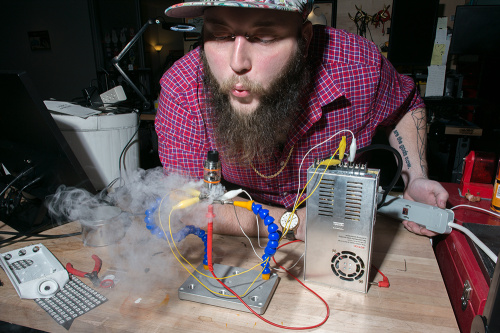 So what if your rig requires a very particular resistance in order to operate? Well, you always have the option of building your own coil. The tank shown above even came with a rebuildable atomizer for people who want to wind their own coils. Coils are wound from several different materials, including Kanthal, nickel, Nichrome, titanium and 316L stainless steel. These different types of wire are wound into intricate shapes and then mounted into rebuildable atomizers to achieve specific properties and performance.

So What Did We Learn?

Well this has been a lot of fun, but did we really learn anything in all this? Sure, we did! We learned: 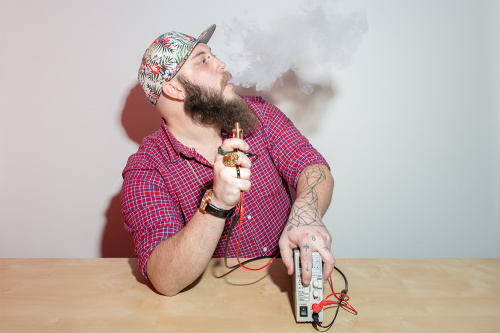 If you found this article interesting, leave me a comment, and maybe I can write more about this in the future. I know there's a huge custom mod community out there, and there's a lot more technology to cover. For instance, I found out that a popular regulated mod board on the market now is based on a 32-bit microcontroller! Also, I didn't even have time to cover DC-DC boost circuits in this post. There's a lot to geek out about here.

Enginursday: The Pro-One and Proto-8 Synthesizers, with Teensy!