SparkFun employees and customers are constantly building really cool, fun projects. As a SparkFun employee overseeing our Supply Chain, I am exposed to and inspired by these on a regular basis, but the step from appreciating to making can be a big one. When I saw the new SparkFun Qwiic MP3 Trigger release a few weeks ago, I was finally nudged to do my own project.

I have two daughters, ages three and five, and they love Disney songs. I wanted to build a music playback device for them that was simple, self contained and loaded with their favorites in an updateable playlist. The other challenge is that they can’t read yet. I have had the idea in the back of my head for a while, but when I read through the MP3 Trigger Hookup Guide I knew this was the thing to use. 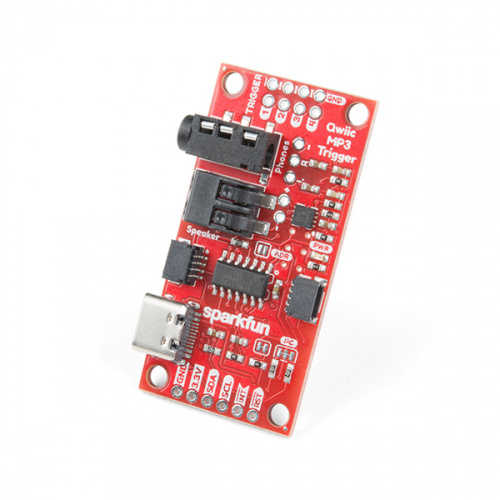 The SparkFun Qwiic MP3 Trigger takes care of all the necessary requirements for playing sound files, all you need to do is se…

The Qwiic MP3 Trigger has an amazing feature for beginners: a pre-programmed tool set that allows for basic playback with no additional coding. This is great if you want to build something, but aren’t quite ready to dive into world of Arduino coding and loading programs onto a board. There is a lot of info on the more advanced capabilities of the board in the hookup guide, but if you skip down to the Example 1: Play Track 1 section, you'll learn the basics you need for this build.

There are four trigger pins on the side of the MP3 Trigger board. When you connect a Pin to the corresponding Ground, it triggers the numbered MP3 track on the microSD card. The pins are also additive, so if you trigger one and four at the same time, track five will play. You can play up to ten tracks in this way with the default programming. The MP3 tracks need to be named T001.mp3, T002.mp3, etc., for the program to recognize them.

For my project, I wanted to attach a button to each of the pins. I went with four colors of our Concave Buttons - red, yellow, green and blue - that are bright and easy for small hands to press. These buttons are also great because they can be screwed onto a panel or box lid. This style of button is a momentary push button. When you press it down, it completes the circuit between the COM pin and the NO pin on the bottom of the switch (I recommend checking out the Switch Basics Guide). If you run a wire from GND on the board to COM on the button, and from Pin 1 on the board to NO on the button, you have a functional switch! The switch portion of the button can be removed from the button itself for ease of soldering, and for mounting the buttons. 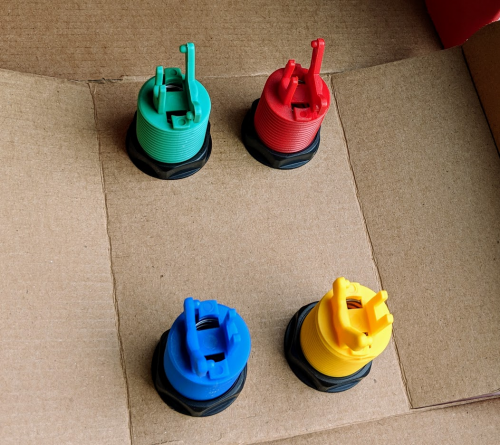 For the speaker you can go basic with two wires and a <1.4W speaker, or you can connect some speakers with the 3.5mm audio jack. I picked up a cheap pair of computer speakers because I wanted to be able to control the volume externally and have louder playback for my daughters’ dance parties.

After attaching the switches to the board with some wires, you’re pretty much done. Just load some MP3s onto a microSD card with the proper track names, slide that into the socket on the back of the board, and attach your selected speaker. I’m powering my board with a USB-C power adapter from a phone, but you can also use a USB-A to C cable, or a basic USB 1A wall charger. 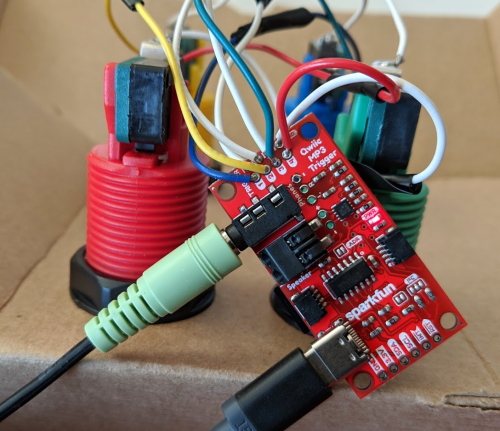 The Qwiic MP3 Trigger all hooked up!

I decided to use one of our red boxes as an enclosure; it has enough surface space for the four buttons, and I was also able to make two side compartments to nestle the computer speakers in. I cut a slot in the side for the speaker volume knob, and a hole in the back for the power cords to come out. Everything is now contained in an easily transportable package. 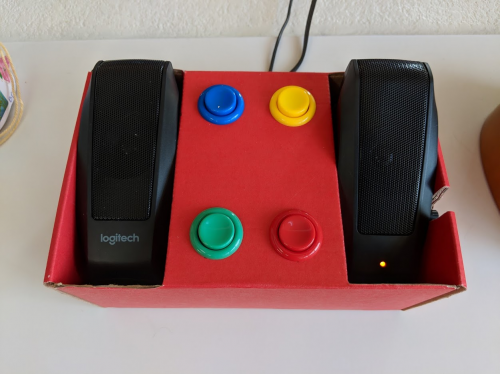 Overall I was happy how this worked out! It took a Saturday afternoon, and my girls helped me pick out songs and watched while I worked on it. My soldering and wiring were a little messy, but it was fun and the girls were thrilled with the result!

I’ll probably build a more advanced version at some point in the future. I’m envisioning finding a nice jewelry box and trying to incorporate something into that for my older daughter. Maybe something that plays a random song when opened… and lights! I’m also curious to try and incorporate the Qwiic Micro OLED to display song info as she learns to read. Thank you so much for reading about my first project foray!