Continuing on my journey of merging art and technology, I decided to try using EL once again for my students' 2017 spring performance with Streetside Studios. If you have not been following along with some of my Enginursdays, be sure to get caught up with the following blog posts.

Let's check out some of my first designs. For Mark I, EL tape and panels were inserted between a shirt and clear vinyl. It did not pan out as well as I thought, since the tiny wires attached to the tape/panels kept breaking off at the joint, and the electronics kept falling out of their pockets. For the next version, I sewed together a harness using non-addressable LEDs. With the success of the second version, I added an accelerometer, N-Channel MOSFET and Arduino to control the LEDs for Mark III.

After some experience adding lights to shirts and harness, I decided to expand to the arms and legs. Instead of using EL tape and panel forms like the first version, I decided to try out EL wire. While the EL wire did not have as much surface area as the flat tape and panel, it was more flexible to a certain point. I also had more time to plan it out over the course of three months. Off I went, sewing 42 meters (coincidence?, I think not) to hoodies and pants. For those that use Imperial units, that's ~1,653.5 inches of hand-sewed EL wire. I decided to join in on the fun with my own suit, so I opted to make a wireless glove to control the suits using XBees and EL sequencers. Behold, my students and I wearing Mark IV. 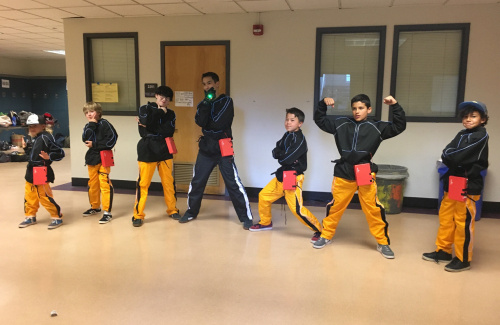 How Do You Build Such a Thing? Part 1

As with any project, you will want to start small and work on the project in parts. In this case, I needed to build a Wireless Glove Controller for the project to control each dancer's EL sequencer. Below is a tutorial showing how I built the wireless glove controller to control a simple RGB LED. The concept and coding used to control the RGB LED is the same as toggling each channel of an EL sequencer remotely.

Tune in some time in the future when I go over the next part of the wireless EL suit. ;D

Friday Product Post: Ohhh! What Does This Button Do?