Facing the daunting task of wiring together 192 of the same I2C sensor inspired a creative solution.

Sometimes we sign up to do crazy things - like going skydiving with your best friend or running a marathon in flip flops. In this case I wound up hatching a plan to use 192 of the same I2C sensor in an interactive installation. As the sheer size and complexity of the goal sank in I grew increasingly curious if there was a simple way to wire all those sensors together. The result is elegant in theory, noisy in reality, and probably won't work at scale. However it is really fun to talk about so stick around to hear about using addressable LED drivers as software switches!

The task: create an interactive installation that allows young children to play with sound and color collaboratively. When the Museum of Boulder asked me and Joe Ryan create this we started thinking big! Joe's fantastic idea was to create a larger-than-life musical staff that kids could place notes on to craft their very own song. The color of the notes would determine what kind of instrument was used. After settling on a size (four measures, four positions per measure, and 12 notes per position) we needed to find a way to actually make it work.

Sensing colors has been made easy by ICs such as the ISL29125. The general idea was to use one of these at every note position along with an addressable LED that could be used to both illuminate the notes for a reading and serve as a visual guide for getting started. A central system would take readings to determine which notes should be played and by which instruments. The challenge was to connect 192 I2C devices that all use the same address.

There are several ways to accomplish this task - perhaps using a tree of I2C multiplexers, using several independent sensing groups each with its own microcontroller, and even extravagant methods using wireless communication. I went in search of a solution that would minimize cost and installation complexity. What I found was the WS2811 addressable LED driver IC.

Knowing that LED data would need to be sent to every node gave me an idea - what if the power to the color sensor could be controlled in the same way? Perhaps this would allow all the sensors to share one I2C bus, as long as only one was powered at a time. In retrospect it is hard to remember which search terms exactly led me to what I needed but eventually I found the datasheet for the WS2811. A companion to the popular WS2812B addressable led, the WS2811 encapsulates the same driver but instead breaks out the R, G and B output pins so that you can attach your own LEDs.

The datasheet indicated that the outputs were constant-current drains of up to 18.5 mA. Not ideal - a controllable voltage output would have been simpler to use but fortunately we know how to convert current to voltage and vice-versa.

Now it's not quite that simple, unfortunately. It would be if the LED driver was a true "analog" constant current driver, but LED drivers typically use Pulse Width Modulation (PWM) to approximate constant current. The duty cycle of the PWM signal is what we perceive as the brightness of the LED. When trying to use an LED driver as a switch you run into a problem - your switch changes quite frequently, even when you have it set to just one value!

You might hope that asking the LED for either a 0% or 100% duty cycle would work well enough, but we can't guarantee how the driver operates. In the case of the WS2811 I found that a channel value of 0 results in a true 100% duty cycle (this makes sense for a common anode LED driver), but the max value (255) only approaches a 6% duty cycle.

The ability to reach a true 100% duty cycle is good for powering the sensor because it means minimal noise. The fact that the supply voltage will occasionally come up, however, is concerning because that may cause any one of the sensors to turn on and interfere with communication on the I2C bus. In order to combat this I used a low-pass RC filter that incorporates the current-limiting resistor.

The WS2811 uses a PWM frequency of 2 kHz, so a 6% pulse would have a width of (6 / 100) • (1 / 2000) = 30 μs. A 30 μs square wave pulse contains many frequency components, the slowest of which is (1 / 30 μs) = 33.3 kHz. In order to block that frequency one would choose a corner frequency below that value. Using a simulated circuit on falstad.com/circuit, I played around with various capacitor values to get a good balance of high-frequency blocking (higher capacitor values) and the time it takes to power on a sensor (low capacitor values) 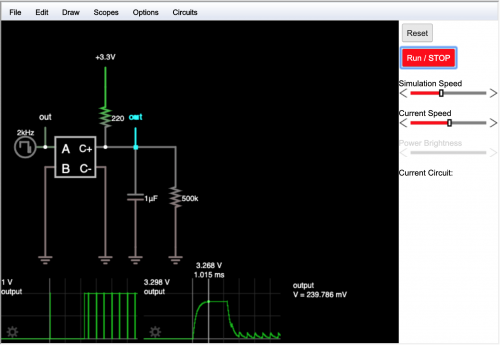 Using the design parameters from above I laid out a prototype schematic and board in Eagle. 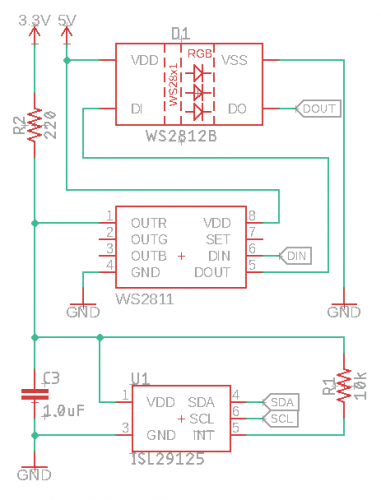 In an effort to move quickly I ordered PCBs and the WS2811 driver ICs at the same time. In fact my original design used a slightly more complicated circuit that I was able to simplify during testing. We've been discussing the simpified circuit but the boards contain a few extra components and a host of white-wire fixes. That's a lesson in why you should always do a 1:1 scale package check for any new parts that you intend on using! Below is an image of the prototype as tested: 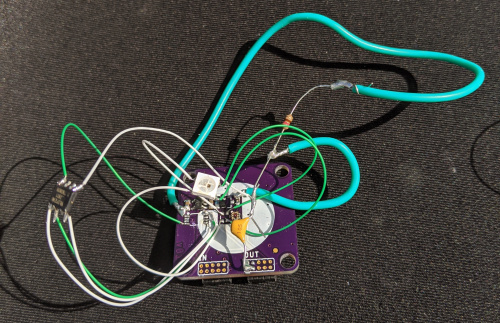 To test the board I wrote a quick test sketch. It uses the FastLED library to control the LED data line (for the WS2811 as well as the WS2812B illumiator LED), and the SparkFun ISL29125 Arduino library to read from the RGB sensor.

Using a digital logic analyzer I was able to record some great data. You can see that the rise time of the sensor VDD line matches what is expected from the simulation, as well as the same small ripples when the sensor is turned off. You can also see that the sensor responds to I2C transactions while it is powered. Shortly after sending the 'off' command, the VDD line falls and the sensor no longer responds to I2C transactions. This suggests that turning off unused sensors should be enough to allow using more than one sensor on the same I2C bus.

This project is a work in progress. To scale this single test up to an array of 192 nodes will present more challenges such as:

These challenges will likely preclude the use of this method in the Rainbow Forest project. Still, using the WS2811 in creative ways could like this can be useful in a host of projects that already involve addressable LEDs such as model train layouts, DIY LED shows with special effects, and much more!